This article describes the city of Limbourg; for other meanings see Limbourg (disambiguation)
lb lh 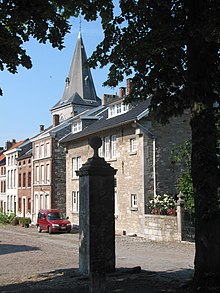 Limbourg ( French ; Dutch and German Limburg ) is a city in Belgium , province of Liège , district of Verviers . It has 5680 inhabitants (2008) and an area of ​​24.63 km². The sub-municipalities Dolhain, Bilstain, Goé and Hèvremont belong to the place (the Ripuarian names of these places are Daelheim , Bilstein , Gulcke and Heverberg ). Limbourg was the nucleus of the historic Duchy of Limburg , after which today's Dutch and Belgian provinces of Limburg were named in the 19th century.

Limburg Castle (this was the customary spelling until the end of the 18th century) was the seat of the counts and later dukes of Limburg from around 1020. After the death of the last duke in 1280 and his heir daughter in 1283, the Limburg succession dispute broke out , which culminated in the battle of Worringen . The dukes of Brabant, the winners of this battle, have held the title of Duke of Limburg ever since.

From 1522 Limburg belonged to the Spanish Netherlands . After the Reformation , an important Protestant community emerged in Limburg. The city developed into a Protestant center in the east of the Walloon country in the second third of the 16th century. In 1566 the citizens of Limburg, like in other cities of the Duchy of Limburg, rose against Spanish rule. From August 1566 until the Spanish reconquest by the Duke of Alba’s troops in March 1567, Limburg was a small reformed republic . Pastor Franz Junius the Elder preached for several months in the Saint-Georges church. Over the centuries, this site has been forgotten again.

At the foot of the fortress hill of Limburg, a flourishing textile industry developed along the Weser from the 19th century . In 1887, the Gileppetalsperre located near the village was inaugurated by King Leopold II of Belgium. His father Leopold I was an occasional guest at the Goé hunting lodge .

The center of Limbourg has largely been able to retain its old building fabric to this day.

Outside the old city fortifications and below the Saint-Georges church is the historic cemetery. The church is located on a craggy rock and towers imposingly above the old and interesting tombs of the place steeply into the sky.

The Weser (la Vesdre) in Limbourg

The local stop on the Liège – Aachen railway is called Dolhain-Gileppe . West of the stop is the viaduct built in 1842 over the Weser Valley, one of the largest engineering structures on this route.