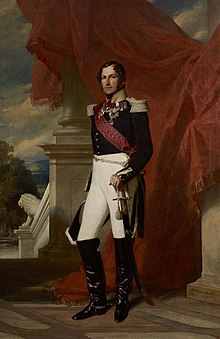 Leopold was the youngest son of Duke Franz Friedrich von Sachsen-Coburg-Saalfeld (1750-1806) from his marriage to Auguste (1757-1831), a daughter of Count Heinrich XXIV. Reuss zu Ebersdorf . His eldest brother Ernst succeeded his father as Duke of Saxe-Coburg-Saalfeld in 1806. Together with the latter he tried in 1807 to obtain compensation from Napoleon for the war damage that had been done in the neutral duchy. 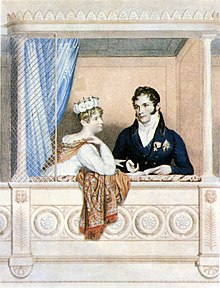 Leopold with his first wife Charlotte Augusta of Wales (after a painting by George Dawe , 1817)

Due to the marriage of his sister Juliane to the Russian Grand Duke Konstantin Pawlowitsch in 1797 at the age of six he received the nominal rank of captain in a Russian guard regiment and in 1801 was appointed colonel in the Russian army . When the Duchy of Saxony-Coburg-Saalfeld was conquered by Napoleonic troops in 1806, he went to Paris . There he was offered the position of adjutant by Napoleon , but he declined. In 1812 he joined the Russian army and was assigned to the staff of his brother-in-law Constantine. In 1816 he reached the rank of Russian Lieutenant General.

Leopold took part in the Congress of Vienna , where Prince Metternich made a deep impression on him. In the entourage of Tsar Alexander I of Russia , Leopold stayed in London in the summer of 1814 , where he met his future wife. In January 1816 he got engaged and on May 2, 1816 the wedding with the British heir to the throne Princess Charlotte Auguste (1796-1817), daughter of the future King George IV, took place in Carlton House . Contemporary witnesses judged the marriage to be very happy.

On November 5, 1817, Charlotte suffered a stillbirth and died the following day. The question of the British and Hanoverian succession to the throne was completely open again and the younger brothers of the Prince of Wales began hastily to look for wives. Leopold arranged the marriage of his sister Victoire to Eduard August, the Duke of Kent and Strathearn , this marriage produced the future Queen Victoria . If his wife had survived, Leopold would have fallen into the role that his nephew Albert later assumed as the prince consort . Leopold remained at the British court in an advisory capacity. He supported his sister Victoire financially and was one of the educators of his niece Victoria, with whom he developed a very close relationship. Victoria always referred to him in letters as a beloved uncle and father . Leopold also arranged the marriage between his niece and nephew in 1840.

On July 2, 1829, Leopold married the actress Karoline Bauer , a cousin of his advisor Christian Friedrich von Stockmar . However, the wedding was celebrated without a religious or public ceremony and is therefore doubtful. This marriage ended in 1831, according to records.

In 1830, after the war of independence there, Leopold was to be awarded the Greek crown. Although this project was supported by the Whigs and Leopold had already corresponded with Ioannis Kapodistrias and Karl Wilhelm von Heideck on this question , he turned it down in May 1830. The offer from the Belgian crown seemed more lucrative to Leopold.

King of the Belgians

After Belgium announced its independence from the Netherlands on October 4, 1830, the Belgian National Congress asked Leopold whether he wanted to become King of the Belgians. The original candidate, Louis d'Orléans, duc de Nemours , was dropped after London intervened heavily.

On July 17, 1831, on the beach at De Panne , Leopold entered what would be his future kingdom. An impressive memorial commemorates this event. On July 21, 1831, Leopold took the oath on the constitution ; since 1890 this date has been the Belgian national holiday . Just two weeks later, Dutch troops invaded Belgium, followed by eight years of combat, before Belgian independence was contractually established in 1839 .

The Metternich supporter and monarchist Leopold saw the very liberal constitution of Belgium as nonsense. Domestically, Leopold was unable to maintain Catholic-liberal unionism over the years. One of the most influential men in the new kingdom was Christian Friedrich von Stockmar , whom Leopold had brought with him from Coburg.

In foreign policy, Leopold campaigned for an understanding between Austria and Prussia on the German question . He promoted the marriage project between the British Princess Victoria and the Prussian heir to the throne Friedrich Wilhelm and adhered to Belgium's unconditional policy of neutrality. Expression of his balancing policy with France was his officially second marriage to Princess Louise of Orléans (1812-1850), a daughter of King Louis Philip of France , whom he married on August 9, 1832 in Compiègne . Leopold remained a Protestant , but his wife Louise, like the vast majority of Belgians, was a Catholic, which is why the children were raised in the Catholic faith. 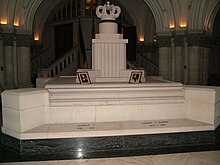 Leopold initiated the construction of the first purely steam-powered railway line on mainland Europe between Brussels and Mechelen , which opened on May 5, 1835.

King Leopold I is generally described as crazy about building and modernizing. However, due to the ongoing disputes with the Netherlands after the Belgian-Dutch divorce treaty - which temporarily blocked the Scheldt as access to the Antwerp port and to the Belgian inland waterways - Belgium urgently needed traffic routes to keep advancing industrialization going. The later - compared to the rest of the mainland of the European continent - the rapid expansion of the railroad in the kingdom was directly related to Belgian independence in 1830. It was possible to avoid the transport of goods and goods between the still important port of Antwerp and the neighboring country Germany stagnated and detours via the waterways and the uncooperative Netherlands will be avoided.

In 1841 Leopold founded the Compagnie Belge de Colonization , but colony foundations in Santo Tomás de Castilla (Guatemala) and Rio Nunez (Guinea) or the takeover of the Republic of Texas and the Kingdom of Hawaii (by the Ladd Company ) failed, and all colonial plans were abandoned in 1855 at the latest .

In 1842 he tried to enforce a law that would regulate the work of women and children, but he could not find a parliamentary majority for it. Through his consistently national policy, Leopold earned the reputation of a pater patriae . Leopold I was buried in the crypt of the Liebfrauenkirche in Laeken .

Leopold I was an active and avowed Freemason . In 1813 he was accepted into the Hope Lodge in Bern. In Belgium he played a key role in the creation of the Grand Orient de Belgique (1833) and laid the basis for the later lodge system. In Antwerp Central Station, the station clock is designed like a box clock to commemorate his Masonic work.

Leopold I. with his family

The association between Leopold and Louise d'Orléans resulted in four children:

Commons : Leopold I King of the Belgians  - Collection of images, videos and audio files