Ernst I. (Saxe-Coburg and Gotha)

Duke Ernst I of Saxe-Coburg and Gotha, oil on canvas, Callenberg Castle , Coburg

Ernst I. Anton Carl Ludwig of Saxe-Coburg-Gotha (born January 2, 1784 in Coburg , † January 29, 1844 in Gotha ) was Duke of Saxe-Coburg-Saalfeld from 1806 . As the first duke of the newly created dual duchy of Saxony-Coburg and Gotha , he was the founder of the royal house of the same name in 1826 . Ernst I was a Prussian general and the father of the British Prince Consort Albert .

Bust of Duke Ernst I in the Coburg State Theater

Ernst was the eldest son of Duke Franz von Sachsen-Coburg-Saalfeld (1750–1806) from his marriage to Auguste (1757–1831), daughter of Count Heinrich XXIV Reuss zu Ebersdorf . His younger brother Leopold became King of the Belgians in 1831, his sister Juliane was a Russian Grand Duchess and through his sister Victoire he was the uncle of Queen Victoria .

He was declared of age early on May 10, 1803 because his father fell seriously ill in the spring of 1803 and he had to take part in government work. Through the connections of his sister he was appointed colonel in Russian regiments by Tsarina Catherine II and Tsar Paul I. Tsar Alexander I appointed him General of the Guard on Horseback in 1801. Ernst took part in the battle of Jena and Auerstedt and then accompanied King Friedrich Wilhelm III. from Prussia to the headquarters in Graudenz .

When his father died in 1806, he followed on December 9th in the ducal office, but could not take office because the country was occupied by Napoleonic troops and was under French administration. It was not until the Peace of Tilsit in 1807 that Sachsen-Coburg-Saalfeld, which was initially to be dissolved, was raised to the status of a duchy and returned under Russian pressure from the duke's brother-in-law, Tsar Alexander.

In 1808 he deposed his father's minister, Theodor von Kretschmann , and put him on trial.

Duke Ernst fought as a Prussian general near Lützen and Leipzig in 1813 and moved into the French fortress of Mainz in 1814 . After the Battle of Leipzig he became the commander of the 5th German Army Corps and after Napoleon's defeat at Waterloo he was given an area of ​​8.25 square miles in the final act of the Congress of Vienna , in which he personally took part on June 9, 1815 25,000 inhabitants around the capital St. Wendel , which was named Principality of Lichtenberg in 1819 and which he sold to Prussia in 1834 for 2 million thalers . He used the proceeds primarily for the acquisition of the castle and rule Greinburg on the Danube and other goods in Tyrol, Posen and Lower Austria. He also acquired the domains Wandersleben in 1836 , Thal in 1837 and Mechterstädt in 1838, as well as Sternberg Castle .

After the Napoleonic War, Ernst I tried to rebuild the duchy. On August 1, 1821, he gave the country a new constitution under a veiled constitutional agreement. He promoted science and the arts and had the theaters built in Coburg and Gotha. Significant in terms of architectural history is its extensive inclination for the neo-Gothic style. The conversions of the castles Rosenau , Ehrenburg , Callenberg and Reinhardsbrunn are among the earliest secular buildings of the Romantic Neo-Gothic in Germany, each embedded in extensive English-style landscape parks.

Duke of Saxe-Coburg and Gotha

After the Saxon-Gotha-Altenburg family with Duke Friedrich IV died out in 1825, the necessary reorganization of the Ernestine duchies was decided in the preliminary treaty of Liebenstein on August 11, 1826 . When the country was divided with the dukes Bernhard II of Meiningen and Friedrich von Hildburghausen , Ernst received the Duchy of Gotha with the offices of Gotha, Ichtershausen , Tenneberg , Georgenthal , Tonna , Liebenstein, Zella , Volkenroda and the office district of Ohrdruf . He now ruled both countries under the name of Ernst I.

As the highest administrative authority of his new country, he founded the Coburg-Gotha State Ministry and reorganized the state administration. He promoted agriculture, trade, infrastructure and trade and concluded trade agreements with his neighbors.

In the "New Mint" set up under Ernst in 1828 to continue the minting operation in Gotha, all denominations of the Duchy of Saxe-Coburg and Gotha were minted according to the coinage convention of 1753/63. After only ten years of operation, the duke had the mint closed for economic reasons and the need for money to be covered by minting orders.

Duke Ernst I died on January 29, 1844 at Friedenstein Castle in Gotha and was buried in the crypt of the Coburg town church St. Moriz . In 1860 it was transferred to the ducal mausoleum on the Glockenberg .

In Gotha in 1859, the educational institution that had emerged from the union of the Illustre Gymnasium and the Ducal Realgymnasium was named in honor of the deceased Ernestinum Gymnasium . 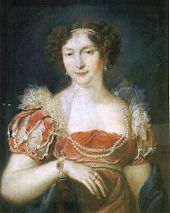 In a second marriage, Ernst married on December 23, 1832 in Coburg Marie (1799-1860), daughter of Duke Alexander Friedrich Karl von Württemberg . This marriage with his niece remained childless.

Commons : Ernst I.  - Collection of pictures, videos and audio files