Georgenthal is a rural community in the south of the Thuringian district of Gotha .

The rural community is located in the Apple Town Valley in the Thuringian Forest , not far from the Rennsteig . 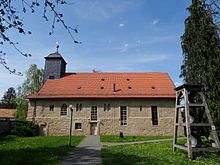 The oldest settlement in Georgenthal goes back to the Asolveroth and Rekkers settlements (Gut Rathkersdorf) in the early clearing period. In 1143 the St. Georg Monastery, a Cistercian monastery , was founded by the Counts of Schwarzburg - Käfernburg . The names Vallis St. Georgii and Monte St. Georgii refer to this monastery , under which the place was mentioned in the 12th century. 1347 is then referred to as Jurginthal . In 1335, the St. Georg Monastery owned almost 11,000 hectares of land with twelve villages and had an important horse breeding business. The monastery was looted by an insurgent peasant army on Easter vigil during the Peasants' War in 1525. In 1531 the monastery property was confiscated by Elector Johann von Sachsen . The former monastery and its twelve villages formed the Georgenthal office in the future . From 1600, one of the monastery buildings was converted into a summer residence, the “Georgenthal Castle”. It was designed and used, among others, by Duke Ernst the Pious of Gotha . From 1792 to 1794, Samuel Hahnemann founded and operated the first German homeopathic institution for the mentally ill here. The place then developed into a popular excursion and holiday destination towards the end of the 19th century.

From 1646 to 1711 the files of the Georgenthal office list 71 witch persecutions . In 1674 alone, 13 witch trials took place under bailiff and witch hunter Benedikt Leo . With very few exceptions, the defendants were handed over to death by burning. Some women died as a result of the ordeal. Sixty-year-old Martha Lanz was burned at the stake on June 4, 1674 on the Hirzberg. The 35-year-old widow of the charcoal burner Lorenz Ortlepp from Catterfeld did not confess to torture and was acquitted.

For many years Georgenthal was a railway junction with its through station. First, in 1876, the Ohratal Railway Gotha – Gräfenroda reached the place. In 1896 the Fröttstädt – Georgenthal railway was opened, but it was shut down and dismantled from Friedrichroda in 1947 as a reparation payment for the Soviet Union. In 1892 the Georgenthal – Tambach-Dietharz railway was opened. Passenger traffic was stopped on this connection in 1969, but the infrastructure for freight traffic was renovated. Due to the poor condition of the line, DB Cargo finally stopped freight traffic at the end of 1995. The line was dismantled in 2010, with the exception of a short remnant between Georgenthal and Georgenthal Ort, which is to serve as a museum. On December 11, 2011, due to the falling number of passengers, passenger traffic on the Ohratal Railway was also discontinued.

During the Second World War , more than 100 men and women had to do forced labor in the Kurhaus, in hotels, in sawmills and in the railway maintenance office. In April 1945 the Wehrmacht officer Otto Fabian refused to lead the Volkssturm to a hopeless fight against the advanced American troops, whereupon he was shot by the SS . The square in front of the Georgenthal Ort train station was named Otto-Fabian-Platz and was given a memorial stone in 1979.

On April 1, 1999 Nauendorf was incorporated.

On December 31, 2019, the communities of Leinatal , Georgenthal, Hohenkirchen and Petriroda merged to form the rural community of Georgenthal. This became a fulfilling community for Emleben and Herrenhof . With the exception of Leinatal, all of the above-mentioned municipalities were previously united in the Apfelstädtaue administrative community.

The past local elections since 1994 have produced the following results:

The blazon for the Georgenthal coat of arms reads: “In gold, a knight in red armor seated on a black horse with a silver bridle and saddle; holding the reins with the left hand, with the right hand a red-handled lance with a silver tip pushing a green dragon at his feet, accompanied by a silver, green-bordered six-leaf rosette at the top right. "

Blazon for the coat of arms of the district of Nauendorf: "In red a broad silver coat of arms pole, inside on a green hill a standing, right-looking black cock with a red crest, red neck rags and feet."

Georgenthal is a state-approved resort .

Excavation area of ​​the monastery ruins

Connected to the community