Sonneborn is a municipality in the Thuringian district of Gotha and is located northwest of the district town of Gotha . The place celebrated its 1225th anniversary in 2010. Since January 1, 2019, Nessetal has been a fulfilling municipality for Sonneborn, before that it was part of the Mittleres Nessetal administrative community .

Sonneborn is at the beginning of the lower Nesselaufs . On the other, north side of the river is Brüheim . Other nearby places are Metebach in the south, Eberstädt in the east and Friedrichswerth in the west. On the eastern edge of the village, the Arzbach strives towards the Nesse, in the west the Gliemenbach does so , which flows into the Nesse opposite the Riedmühle .

The name Sonneborn , formerly also Sunnenburn , Sunnenbrunne , means sun well . The place name refers to the source in the locality called Sumfer , it has been enclosed by a wall for centuries, provides spring water of the same temperature, the temperature of which is around 8 ° C even in winter. The spring is said to have never frozen over or dried up in summer in living memory. This peculiarity can also be found in the local seal and in today's coat of arms, which represents the sun that stands over the fountain.

The Sonneborn corridor on the western edge of the Thuringian Basin has been occupied by numerous settlement areas since the Neolithic Age . Five settlements of the band ceramists alone are known, until the 1960s stone tools found by the cord ceramists and the bell beaker culture were regularly given to the Gotha Museum by attentive harvest workers.

On the Steinberg near Sonneborn there was a single Late Bronze Age burial mound. When it was removed in 1949, a subsequent burial with a high medieval coin treasure - 26 bracteates from the time of St. Elisabeth of Thuringia (1225–1230) - came to light. The remarkable “body grave of Haina” and similar finds date back to Roman times and the subsequent migration period . These are individual burials of warriors who probably died while marching through the Sonneborn area and were buried with their belongings and weapons at the place of death.

After the fall of the Thuringian Empire in 531, the Franks penetrated along the rivers and old roads into the settlement areas of the Thuringian tribes. For example, the field and place names Frankenroda , Osthofen and Nordhofen in the vicinity of the place are reminiscent of this time . In the 8th century, the Christianization of the population began with extensive land donations to the imperial monasteries of Fulda and Hersfeld. A directory of the Hersfeld monastery from around 780 names 6 farms and 10 Hufen land in Sonneborn. The settlement was built up to around the year 1000, combined with clearing work and the reclamation of the Nesseaue. Invasions by the Hungarians (also referred to as the Huns in medieval chronicles) are also documented in West Thuringia - the Eisenach chronicler Johannes Rothe mentions their campaign along the Nesse. Around the year 1000, the first stone church was built in the local area of ​​Sonneborn, it was surrounded by a stone wall into which the village population could save themselves with their belongings. The location was also surrounded by a protective ditch and a “wall” made of clay.

Sonneborn belonged to the Wangenheim Court in the later Duchy of Saxe-Gotha-Altenburg or Saxe-Coburg and Gotha after it was acquired by the Lords of Wangenheim in 1370 until the patrimonial courts were repealed in the mid-19th century . The castle in the village became the seat of the Wangenheim court in Sonneborn. From 1920 the place was in the state of Thuringia .

The local elections on May 26, 2019 brought the following results:

Jürgen Fleischhauer (WIR) was elected mayor in June 2016. He won the runoff election against his predecessor Günter Dietmar (non-party) by just one vote.

Buildings and other sights in and around Sonneborn 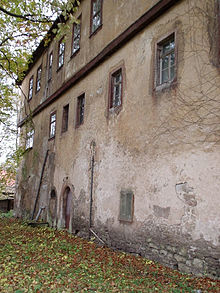 There is a primary school in Sonneborn, in which the pupils from the surrounding towns ( Brüheim , Eberstädt , Friedrichswerth , Haina ) are taught up to the 4th grade. There is a kindergarten and the children's group "Fröbelhaus-Sarona".

Sonneborn has its own industrial park. Among other things, a large European window manufacturer has settled there.