This article deals with the municipality of Tonna in Thuringia. For further meanings of Tonna see Tonna (disambiguation) . 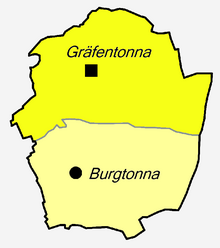 The community is located in the far north of the district, about 20 km north of the district town of Gotha , seven km east of Bad Langensalza . The two districts are traversed by the Tonna , a stream that flows on the southern outskirts of Ballstädt near the Fahner Höhe at 337 m above sea level. NN rises. The Seegraben flows towards it between the two districts and drains the Seefeld between Tonna and Döllstädt . In Gräfentonna, near the penal institution, the Reifenheimer Graben, now called from Aschara (White Bach) and Eckardtsleben (Black Bach), and the Brombach, coming from the eastern fields, flow into the Tonna. It leaves the municipality in a northerly direction and flows into the Unstrut at 167.1 m above sea level about 10 km after its source at the Lohmühle near Nägelstedt , a district of Bad Langensalza . NN. It therefore belongs to the Unstrut river system , which carries its water over the Saale and Elbe to the North Sea . The Tonna drains an area of ​​65.4 km².

The transport connection is via the Kühnhausen – Bad Langensalza railway line , to which there is a train station in Gräfentonna. In addition, Gräfentonna is on the B 176 (Bad Langensalza – Sömmerda, formerly L 1042). Burgtonna is about four km south of Gräfentonna on the L 1043 (Gräfentonna – Gotha, Kindleber Straße) between Gräfentonna and Ballstädt and is also the end of the road that comes from Wiegleben , which crosses the B 247 and connects Aschara with Burgtonna.

Description of coat of arms

The wavy post in the middle with a blue background represents the Tonna stream. The base is taken from an old seal from Burgtonnas. The lion is the heraldic animal of the Counts von Gleichen , who come from Tonna. The coat of arms was approved on May 31, 1996.