The title of this article is ambiguous. Further meanings are listed under Herrenhof (definition of terms ) . 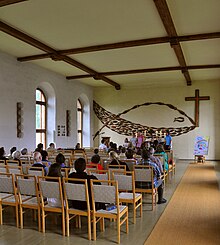 Herrenhof is a municipality with an area of ​​approx. 440 ha. The place has approx. 800 inhabitants. The place is on the northern slope of the Thuringian Forest on the connecting road from Georgenthal to Hohenkirchen . The Ohrdruf-Hohenkirchen-Herrenhof industrial park is located in the southeast of the town.

Herrenhof was first mentioned in a document in 1126. At that time the monasteries Reinhardsbrunn and Georgenthal fought about the district of Herrenhof . The dispute ended in 1186 in favor of Georgenthal. After its dissolution, the place belonged to the Georgenthal office from 1531 , which in turn belonged to the Duchy of Saxony-Gotha from 1640 .

The coat of arms was approved on September 5, 2014 by the Thuringian State Administration Office Weimar.

Blazon : “In silver over a wavy blue shield base a red, black-jointed two-arched bridge, on each side a cut red, black-roofed half-timbered house with a golden window and black cut archway, in between three (2: 1) growing blue flax flowers growing out of the bridge golden lumps and green stems and leaves. "

The symbols of the coat of arms are explained as follows: Geographically, Herrenhof is divided into the upper and lower villages (represented by the half-timbered houses), which are connected by a two-arched bridge over the Apfelstädt river. The linseed plants relate to the flax cultivation that has been practiced up to the present day.

The colors of the church are red and white.

Crafts and trades are located in Herrenhof, and the fact that they belong to the common industrial area of Ohrdruf , Hohenkirchen and Herrenhof with free capacities gives hope for further business settlements.

There was a chapel in Herrenhof as early as the 12th to 17th centuries. It was first mentioned in 1143 in a document from the Reinhardsbrunn monastery . At that time the monasteries Reinhardsbrunn and Georgenthal fought about the district of Herrenhof . The dispute ended in 1186 in favor of Georgenthal. At the end of the 17th century, the dilapidated chapel was replaced by a new building from 1692. Four years later the church was consecrated as a branch of Hohenkirchen. The difficult route for churchgoers and schoolchildren from the Unterdorf (today's Georgenthaler Strasse, Alte Strasse, Schönauer Strasse) via (through) the Apfelstädt below the church was only made easier in 1778 by the construction of the passable bridge. In the upper village of Herrenhof (Nauendorfer Straße), a large fire destroyed five houses and nine barns, including the previous chapel from the 17th century, in the night from February 26th to 27th, 1882. Only the massive church tower, which was only completed around 1839 after a donation of 4,000 thalers in will from the citizen Johann Christian Beck, escaped complete destruction. The new building was also financed from donations from wealthy residents. The resident Johann Balthasar Cramer (1813-1891) donated 1,800 marks for the purchase of a new organ, for the floor, a bell and a chandelier. However, the bell did not survive the Second World War. In the 1970s, severe structural damage ( sponge infestation ) was revealed . In 1975 a new organ from the workshop of Rudolf Böhm from Gotha was installed. The parish worked 35,000 hours to secure their church and convert it into a community center. Due to this, the chancel of the church is on the first floor, while the ground floor contains community rooms (multi-purpose rooms for meetings, youth clubs, etc., as well as a kitchen). Worth seeing in the chancel is the wall decoration created by the Graefenhain artist Gert Weber, which depicts the fishing of Peter (Luke 5.1 ff.). Herrenhof forms a common parish with the neighboring villages of Hohenkirchen and Petriroda .

The place has maintained close partnership relationships with the Knüllwald community in Hesse since 1990 .