The Guinness World Records book is the most important collection of records . It has been published annually since 1955 and contains human peak performances and extreme values ​​as well as natural phenomena. 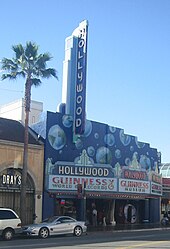 The first book was commissioned by the Guinness Brewery in 1955 and published in Ireland . The twins Ross and Norris McWhirter wrote the first issues .

The idea for this book came from the brewery's manager at the time, Sir Hugh Beaver. According to the company, this guest was on a bird hunt in which the hunters missed some birds. A discussion has developed about the question of which is the fastest game birds in Europe. However, no answer has been found in any reference work. It had occurred to Sir Hugh that there were similar unsolved discussions in pubs, which gave rise to the idea for a Guinness promotion to resolve such disputes.

On August 27, 1955, the first bound edition of Sir Hugh Beaver was available and went into bookshops under the title The Guinness Book of Records .

Guinness World Records is now a company based in London and employs around 50 people who handle the record cases. The name is also a registered trademark under which the concept is marketed. The Hollywood Guinness Museum, which shows exhibits to recognized records, is located in Los Angeles .

The company was acquired in 2008 by the Canadian company Jim Pattison Group . In addition to selling the books, the company earns fees for quickly processing the records and developing and creating new records for companies and states.

The work includes numerous records from the fields:

In addition to data and facts, various top performances are also recorded. In order for an action to be included in the book as a new record or to discontinue an existing one, various conditions must be met and registered with the headquarters in England.