Johann the Steadfast, portrayed by Lucas Cranach the Elder. Ä. 1526

He was the fourth son of Elector Ernst and followed his brother Friedrich the Wise in rule. Little is known about Johann's childhood and youth. Presumably, however, he and his brothers enjoyed a good upbringing at the Electoral Saxon court, whereby the main focus was certainly placed on the first-born Friedrich as a potential successor to the electoral throne. After his father's death in 1486, Friedrich took over the government together with his brother Johann, who was then eighteen. The other two brothers Albrecht and Ernst (II.) Entered the service of the church. In 1513 Friedrich and Johann agreed to divide the country internally. Since then, Johann has ruled part of the electorate from Weimar , making the city a permanent residence of the duke. Externally, however, they ruled Electoral Saxony and the Ernestine parts of Thuringia together until the death of Frederick in 1525, the elder of the two brothers who held the electoral dignity.

The entire common reign of the two brothers was characterized by good understanding and cooperative cooperation. Neither of them made important decisions without first consulting the other. Although this approach often paralyzed the decision-making process, on the other hand, disputes between the ruling princes or political solo attempts would not have been exactly helpful for an effective and successful policy.

After his second marriage to Margarete von Anhalt († 1521), he and his brother shared the lands of Electoral Saxony among themselves. Johann then settled in Weimar, where he founded his own farm and from then on was responsible for the Thuringian, Franconian and Vogtland parts of the country. Since Johann had never shown a great interest in the administration and finances of his state, these were neglected after he had received his own court. Both before Friedrich's death and afterwards, when Johann was responsible for the finances of the entire electorate, the administration was described as very corrupt. Allegedly, officials are said to have enriched themselves at the elector's expense and only dealt with writing very superficially, which is why his son and successor Johann Friedrich had to struggle with a desolate financial system and administrative apparatus after his father's death in 1532.

Because of differences of opinion, between 1530 and 1533 there was a so-called Saxon coin separation between Johann and the Albertine Duke George the Bearded . Johann was of the opinion that the high-quality Saxon guldengroschen harmed the population, since they were brought out of the country by usurers and imported there for less valuable money, and he called for the silver content of the coins to be reduced. In contrast, the Duke insisted on maintaining the previous value of the coins. As a result, the common Schneeberg mint on the territory of the elector was closed. The Zwickau mint , which was temporarily reopened in 1530, and the Buchholz mint began to mint for Johann after a lighter monetary standard. Under his successor Johann Friedrich, the former coin community came into force again.

In 1531, Johann raised a Turkish tax for Turkish aid “and other troubled care and need in matters of faith and religion” .

Johann and the Reformation 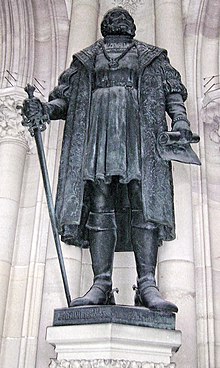 Statue in the Speyer Memorial Church

Johann the Steadfast of Saxony. (by Lucas Cranach the Elder, 1509) 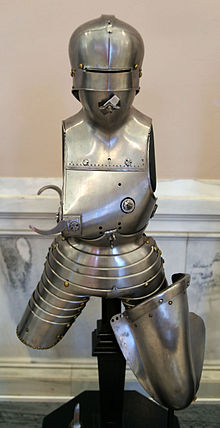 As his nickname suggests, he had the same positive attitude towards the Reformation as his brother. His steadfastness and courage to stand by his confession probably earned him most of the fame among his contemporaries. Christian beliefs were also the basis of his political decisions, which were considered very fair. In political matters, however, he was often hesitant. In the cooperation between him and Landgrave Philipp of Hesse , with whom he was in close relationship due to the common denomination, Philipp was the driving force and rather spoke out in favor of an aggressive foreign policy. Johann, on the other hand, was particularly cautious about the question of whether Protestants should defend themselves against the emperor and for a long time stood on the side of Luther, who did not approve of a defensive alliance against the Catholics, as it was officially forbidden to oppose themselves to ally the emperor.

As the sovereign of Martin Luther , Johann maintained a very close, almost amicable relationship with the leading Protestant theologian. Luther was also often positive about Johann. He particularly praised him for his behavior at the Augsburg Reichstag in 1530: “I certainly believe that the Elector John of Saxony had the Holy Spirit. He proved that in Augsburg through his confession (...) ”. Often Johann is said to have said: "Tell my scholars that they do what is right, to praise and honor God, and show no consideration for me and my country." By insisting on the Protestant creed, he should even appeal to Protestant theologians have kept from being too lenient to the emperor.

In 1527 the Evangelical Lutheran Regional Church was founded, the regional bishop of which was the Elector. In 1529 he was one of the princely representatives of the Protestant minority ( Protestation ) at the Reichstag in Speyer . The Schmalkaldic Confederation of Protestant Imperial Estates, founded in 1531 to defend the Reformation, was under the leadership of the Electorate of Saxony and Hesse . After his death, Johann was buried next to his brother Friedrich in the castle church in Wittenberg .

Johann was married to Sophie von Mecklenburg (1481–1503), daughter of Duke Magnus II of Mecklenburg , in his first marriage since 1500 . From this marriage there was a son:

In 1513 he married Margarete von Anhalt (1494–1521), daughter of Prince Waldemar VI. von Anhalt-Köthen , with whom he had the following children: