List of the electors, dukes and kings of Saxony 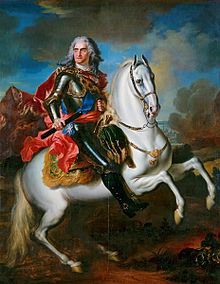 Elector Friedrich August I.
Due to the Polish royal dignity, "August the Strong" is often incorrectly referred to as the King of Saxony.

The list of electors, dukes and kings included in chronological order (above) Saxon rulers of the collection of the old part of the Duchy of Saxony-Wittenberg under the Ascanians in the Elector Stand (1356) about their extinction and the transition of electoral rights and territories of the acquis the Wettin until the end of the monarchy (1918) in Saxony, which was elevated to a kingdom, as the predecessor of today's Free State . Both noble families practiced a patrilineal line of succession , i. H. only the sons of a ruler or - if there were none - his brothers were considered heirs to the throne. Electresses, duchesses and queens of Saxony therefore did not exist in their own right, but as honorary titles of the wives of the respective ruler. You can find them in the list of Electresses, Duchesses and Queens of Saxony .

Unless otherwise noted, the rulers listed here are the sons of their predecessors. Due to a lack of primogeniture , however, all male descendants were equally entitled to inherit until the late period, which is why there were diverse and complicated splintering of territories and the development of new branch lines. In the 15th century, for example, in addition to the elector himself, his uncles and brothers temporarily ruled over independent lands that had been detached from the property of the entire house - since it was possible, due to previous leaseholdings by the Wettins, that all (including younger ones) Members of a princely family were able to hold all titles in the entire house. B. every Wettiner from 1423 the title of Duke of Saxony - regardless of whether he was also elector of the empire, only had areas of land in Thuringia or was a non-ruling prince.

The Golden Bull issued by Emperor Charles IV in 1356 counted the Duchy of Saxony-Wittenberg among the electoral princes . As a result, Saxony-Wittenberg secured the previously exercised right to elect a king and many other privileges, which made the dukes rise to the rank of the highest-ranking princes in the empire.

After the Ascanians of Wittenberg died out , Margrave Friedrich IV of Meissen was enfeoffed with the Duchy of Saxony-Wittenberg , recognizing the electoral dignity associated with it. The name Saxony now moved further up the Elbe in order to ultimately cover all other Wettin territories (including the heartland of Mark Meißen and the Landgraviate of Thuringia ). The new Electorate of Saxony , which had now emerged , had nothing in common with the old tribal duchy (main part of today's Lower Saxony ) and with the former Ascanians, who still belong to Lauenburg and Anhalt .

The division of Leipzig

In the partition of Leipzig in 1485, the brothers Ernst and Albrecht divided the Wettin lands among themselves. The Duchy of Saxony-Wittenberg (with the later Kurkreis ) and the associated electoral dignity as well as most of the Thuringian lands remained with Ernst and his descendants ("Ernestine line"). The descendants of Albrecht ("Albertine line") received the main part of Meissen and henceforth ruled Dresden as dukes of Saxony.

Electoral Saxony among the Albertines

As a result of the Schmalkaldic War , Johann Friedrich, as head of the Schmalkaldic League, lost large parts of his land in Upper Saxony and the electoral dignity to his cousin Moritz , who had been on the emperor's side . His sons could only keep the possessions in Thuringia .

Elevation to the Kingdom of Saxony

Napoleon elevated the Electorate of Saxony, which was on his side, to a kingdom in 1806 .