Johann Georg II., Illustration from a coronation diary from 1658 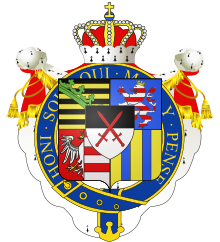 Johann Georg was a son of the Saxon Elector Johann Georg I (1585–1656) from his second marriage to Magdalena Sibylle (1586–1659), daughter of Duke Albrecht Friedrich of Prussia .

His reign was marked by the economic reconstruction of Saxony after the Thirty Years War . The economy slowly revived, to which established and new trades and manufactories contributed (textile industry, hard coal mining, glass, etc.). On March 9, 1668, together with CW Lüttichau and C. Schindler , he sealed the first guild ordinance of the Dresden watchmakers' guild. The silver of the Ore Mountains filled the empty princely coffers, and the Leipzig trade fair generated new income. The Bohemian exiles (1654) also contributed new income to the economy. Furthermore, the electoral administration tried to protect the traditional rights of the peasantry.

Johann Georg had the Bautzen Mint rebuilt in 1666 for the minting of land coins in his neighboring region of Upper Lusatia in order to prevent the execution of the full and the introduction of low- value coins . The special coinage of the mint was supposed to be equivalent to the coins circulating in the imperial lands that were lighter than those prescribed in the imperial footer. Since the measure in Bautzen proved to be a failure, the mint was shut down again in 1667 and its equipment was brought to the Dresden mint .

The main interests of the elector, however, were not economic or political, but cultural. During his reign, Dresden became a European center of art and music, especially religious music. He revitalized the Dresden court orchestra and drew numerous artists from Italy to his court, who were dismissed after his death due to austerity measures.

In 1658, Duke Wilhelm IV of Saxe-Weimar accepted the Elector into the Fruitful Society . It was given the prize-worthy company name and the motto is unchangeable . A cedar tree was given to him as an emblem. The electoral entry can be found in the Koethen Society Register under number 682.

In the style of Louis XIV of France , he began to embellish his residences in baroque style . In Dresden z. B. an opera and comedy house , ballroom, shooting house and riding house were built or expanded. In the castle itself, numerous rooms and the Hausmannsturm were designed in the Baroque style, but the old facade painting was also renewed . Furthermore, an Italian garden was laid out and the Great Garden began . He had the Hoflößnitz designed by his court painters in a mannerist manner. The most famous architect in his government was Wolf Caspar von Klengel .

The country's economic revival was also reflected in the increasing number of courtly festivities, which also impressed his younger grandson August as a child. In February and April 1678 there were e.g. B. two great events that were celebrated accordingly: one time the meeting of the elector with his brothers, the secondary princes of Saxony-Merseburg , Saxony-Weißenfels and Saxony-Zeitz ; and once the feast of St. George was celebrated. On this occasion, the thaler was minted for the award of the Order of the Garter and for the St. George Festival of 1678. The ceremony of awarding the Order of the Garter was previously on April 13, 1669. In 1676, the court comprised over 300 people. A wig tax of 10 thalers (1676) and a sledge order (1682) became necessary because the lower classes also wanted to express their improved situation through status symbols.

The reconstruction after the Thirty Years' War and his lavish courtship devoured enormous sums of money, led to the threat of national bankruptcy (1660) and made Johann Georg II politically dependent on the French King Louis XIV, who paid him substantial subsidies. The elector tried to balance the disadvantages of this alliance through secret diplomacy with the imperial family, Brandenburg and Bavaria (1664). When he died, he left behind a considerable debt of around 4 million thalers.

In the development of absolutism and a standing army, his government activities lagged behind his opponents in Bohemia and Prussia , where the estates had already been disempowered in 1620 and 1663, respectively. Johann Georg II remained dependent on the Saxon estates . His foreign policy sphere of activity was also relatively modest, if one compares him, for example, with the Great Elector . The verdict of a French marshal is correspondingly unfavorable : “ This prince was manipulated by a stranger and showed nothing industrious but to drink excessively throughout his life; he had inherited this rare quality from his father. Its chief councilors were entirely dependent on the imperial court. (...) "

Johann Georg II married Magdalena Sibylle von Brandenburg-Bayreuth on November 13, 1638 in Dresden . The children are from the marriage: