Georg the Pious , also called the Confessor (* March 4, 1484 in Ansbach , Principality of Ansbach ; † December 27, 1543 ibid) was Margrave of the Franconian Principality of Ansbach from 1515 to 1543. Between 1527 and 1541 also administered Brandenburg-Kulmbach for Albrecht Alcibiades , the underage son of his late brother Casimir . He managed to be recognized as a Silesian Duke. As an early follower of Martin Luther , he introduced Protestantism in his areas.

Painting of the margrave

Georg, from the house of the Hohenzollern (see also list of the Hohenzollern family ), was born as the son of Friedrich the Elder , the second son of Albrecht Achilles . His mother was Sofia , the daughter of Casimir IV Jagiełło , Grand Duke of Lithuania and King of Poland, related to the Imperial House of Habsburg .

The third marriage was on August 25, 1533 with Aemilia von Sachsen (1516–1591). She was a daughter of Henry the Pious . They had four children and with Georg Friedrich also the hoped-for heir:

In the oven at the royal court of Vladislav II

Georg was an educator, then co-guardian, of the later King Ludwig II.

Father Friedrich planned Georg's career at an early age. After his brother Kasimir was intended to be the heir of the margravate as the first-born son, a spiritual career was planned for Georg and he was endowed with canons' foundations in Würzburg in 1498 , later he renounced. Despite participating in the Landshut War of Succession , he did not embark on a long-term military career. In 1506 Frederick sent him to the court of his uncle, King Vladislav II of Bohemia and Hungary in Ofen . Due to a special position of trust, he became educator and later co-guardian of the son Ludwig II.

In his first marriage, Georg married Beatrice de Frangepan in 1509, who died a year after the wedding. She was the widow of Ivaniš Korvin , the illegitimate and only son of King Matthias Corvinus . George inherited an extensive inheritance (e.g. Hunedoara Castle ). He could hardly defend his new possessions in part in border disputes with the Zápolya family .

Georg and his brother Casimir ousted their father Friedrich in 1515 . Accused of leading a lavish lifestyle, they imprisoned him at the Plassenburg . Since Georg stayed mainly at the royal court, Casimir ruled in fact solely over the margravate of Kulmbach and Ansbach. His name stands for the bloody suppression of the Peasant War in the region in 1525.

In the years that followed, Georg tried to gain influence in the Silesian region. An initial success was that he agreed with Duke Johann II of Opole and Valentin of Ratibor to succeed him as Duke if he continued to have no children and therefore had no heirs. King Vladislav II had no objection to this plan and the Bohemian estates, which had initially determined that foreigners were not allowed to acquire the ducal dignity, granted Georg an exception clause.

When Duke Valentin von Ratibor died in October 1521, Georg succeeded him in the Duchy of Ratibor . Johann von Oppeln also left the town and castle Oderberg to him . He only received Opole as a pledge against payment of a corresponding pledge. King Ludwig II gave him the power of Bytom . A little later he acquired the Duchy of Jägerndorf , which included the towns of Jägerndorf and Leobschütz , from Georg von Schellenberg . There he had a new castle built under the guidance of Hans Beheim . The castle was included in new defensive measures from a strongly fortified city wall and city gates. The city streets were paved.

The marriage policy was also aimed at securing the Silesian territories. In 1525 Georg Hedwig (1508–1531) married, a daughter of Charles I von Münsterberg . In 1518, Georg's sister Anna married the Duke of Teschen Wenzel II and sister Sofie the Duke of Liegnitz Friedrich II.

When King Ludwig II died at the age of 20 in the battle of Mohács , Ferdinand I was followed by a Habsburg who resolutely opposed the expansionist efforts of the Hohenzollern in Silesia and exercised his rights as a liege lord. For the Hohenzollern, only the rule over the Duchy of Jägerndorf until 1621 with four rulers from the family was of a longer duration, whereby Georg's son Georg Friedrich still had considerable property in Silesia.

Return to the home margravate

Coin with guardian Georg and his nephew Albrecht

From 1535 Georg built the Ratibor hunting lodge in Roth

Epitaph for Georg and his father Friedrich in Heilsbronn Monastery

Detail from the ensemble, on the left the bust of George

In the dispute for the throne, Ferdinand I had his opponent in Johann Zápolya . Despite the differences over influence in Silesia, Georg and his brother Casimir stuck to Ferdinand. Casimir, who finally contributed to the victory in Ofen with auxiliary troops in 1527, died on site in the Ruhr . He entrusted the king and Georg with their five-year-old son Albrecht . As a result, Georg returned to Ansbach and concentrated on the government of the two margravates. He administered Brandenburg-Kulmbach for Albrecht . He became reconciled with his father Friedrich, whom he released from the Plassenburg and brought to his court in Ansbach. In 1532 he married Aemilia von Sachsen for the third time, with whom he had four children. From the income of the Duchy of Ratibor he was able to finance the construction of the Ratibor hunting lodge in Roth , which began in 1535. 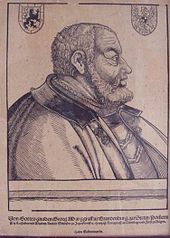 George the Pious, Margrave of Brandenburg-Ansbach

Georg was an early supporter of Protestantism . He used the correspondence with Martin Luther , which has been handed down, and first introduced the Reformation in the Silesian possessions. In Leobschütz , the forcible expulsion of the Franciscans , whose monastery then served as a granary, led to an unpleasant confrontation. After Kasimir's death, he promoted the Reformation in the margravate by visiting churches and introducing the Brandenburg-Nuremberg Church Ordinance in 1533. The church ordinance had its starting point in Nuremberg and was written by well-known reformers such as Andreas Osiander , Lazarus Spengler and Johannes Brenz . The diocese of Regensburg under Johann III. of the Palatinate lost the Deanery Wunsiedel to the new confession. In Hof , Georg supported the preachers Kaspar Löner and Stephan Agricola . During the church visit, George the Pious judged the clergy on their loyalty to him and their attitude towards the new confession. He had unwelcome people incarcerated in order to bow to their will or withdrew their income. He also influenced his relatives. He advised his brother Albrecht , Grand Master of the Teutonic Order , to transform the state of Prussia into the secular Duchy of Prussia and induced Joachim II of Brandenburg-Prussia to convert to Protestantism. At the Ansbacher Hof, Georg Vogler , Johann Rurer and Johann von Schwarzenberg were among the supporters of Protestantism; his brother Friedrich was seen as an opposing force. Georg transferred the administration of church property to state officials and also confiscated church property for his own benefit.

In imperial politics, Georg strongly advocated the new teaching. At the Diet of Speyer in 1529 he was one of the signatories of the Protestation in Speyer . He confessed to the Schwabach articles . At the Diet of Augsburg in 1530, he explained to the emperor that he would rather have his head chopped off immediately than renounce his convictions. Then he was among the signatories of the Confessio Augustana .

Due to his Protestant convictions, Georg also received the additions to his name, "the pious " and "the confessor". The former appreciation in particular was controversial in the classical literature. Starting points for criticism arose in the father's disempowerment, the upbringing at the Hungarian court and the behavior especially towards the monasteries, whose secularization gave the territorial lords a number of welcome advantages regardless of their religious convictions. The abbot of Heilsbronn monastery even reported on excessive, improper drinking bouts .

He was buried in Heilsbronn Monastery. On the epitaph, a work by Loy Hering , you can see him and his father kneeling on either side of a cross and praying.

For Berliner Siegesallee , the sculptor Harro Magnussen created a bust of George as a secondary figure to the monument to Joachim II in monument group 20 . The central theme of this group was the representation of the Reformation. Magnussen used two portraits (relief and painting) of George from the Heilsbronn monastery church as a template for his depiction . He implemented Hanns Henneberger's painting, showing Georg at the age of 39, almost plastically.