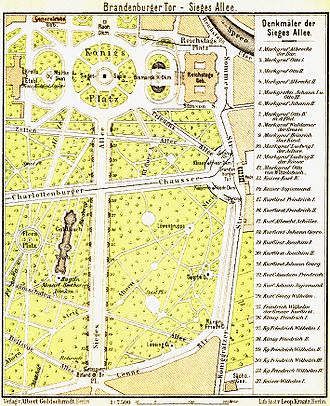 Plan of Siegesallee with the 32 groups of figures, 1902

The groups made of marble consisted of 32 statues, each 2.75 meters high, depicting all margraves and electors of Brandenburg , kings of Prussia and emperors of Germany between 1165 and 1888. Each statue was assigned two smaller busts of people who played an important role in the life or time of the respective rulers. The groups were arranged on a semicircular platform that was closed at the back by a bench. The two secondary characters were fitted into the bench and divided it into three sections. The statues stood centrally on a plinth above the three-step platform staircase.

The monumental avenue, ridiculed by parts of the Berlin population as "Puppenallee", was built between 1895 and 1901 on behalf of Kaiser Wilhelm II. The artistic director was the sculptor Reinhold Begas , the historical program was directed by the historian and president of the Prussian Secret State Archives Reinhold Koser . Siegesallee was demolished after the Second World War , and some figures are missing. Most of the remaining, partially damaged monuments were buried in the Bellevue Palace Park and were stored in the Lapidarium in Berlin-Kreuzberg from 1978 to 2009 after they were excavated . In May 2009 the 26 statues and 40 busts, including two busts from the so-called groups 33 and 34, were moved to the Spandau Citadel . There they were restored and have been part of the new permanent exhibition “Unveiled. Berlin and its monuments ”.

The list also lists two additional groups that were set up in 1903 on the semicircular square in front of the Brandenburg Gate and are based on the style of the Siegesallee groups. The list gives details for each group: title, function, reign and dynasty of the main character; the persons represented by the secondary busts and their function; Sculptor of the group; Date of disclosure; The whereabouts and state of preservation of the figures. In addition, some groups contain additional information on the history of their creation, composition or artistic design.

Postcard (around 1900), in the foreground the group with Otto II. 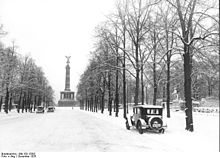 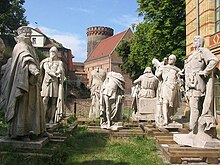 Statues in the museum courtyard of the Citadel , August 2009, before restoration

Albrecht I. (Albrecht the Bear)

Johann I and Otto III.

Otto IV. (With the arrow)

Ludwig I (the Brandenburger)

In addition, in 1903 statues of Emperor Friedrich III. and Empress Friedrich placed on the semicircular square in front of the Brandenburg Gate . The overall designs for the facility come from Oberhof building officer Ernst von Ihne , the architectural and decorative equipment from August Vogel and Wilhelm Widemann . The stone sculptor Fritz Tübbecke took on the marble finish . Unveiling of both groups, often referred to as Groups 33 and 34 of Siegesallee, on October 18, 1903. Uta Lehnert contradicts the assignment of the groups to Siegesallee: “The monuments of Wilhelm II's parents were in a certain ideal context to Siegesallee, in In the narrower sense, however, their various claims (as groups 33 and 34) must be denied. ” For example, it would have been inconceivable that Wilhelm II would have erected a memorial to his mother, who died in 1901, in Siegesallee.

After the November Revolution , in which the soldiers' council Hans Paasche had suggested that Siegesallee be demolished, Kurt Tucholsky asked in December 1918 under his pseudonym Theobald Tiger in the magazine Ulk in the poem Bruch : 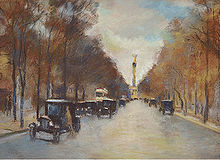 But what will happen to Siegsallee now?
Will you go to the New Lake because it is too royalist,
too autocratic and too monarchist
?

Do you leave the stature of every monument?
and just put new heads on their necks?
Well, let's say that of Lüders Else
and Brutus Molkenbuhr ?

Do you wake up the beautiful, white marble?
Years ago, back then,
when I was taking my exams, I knew how everyone came in sequence ...
Should that have been in vain?

And she is beautiful! - Let's go by
and smile - because we know all about it.
I think we'll let the dolls stand still
as documents of a great time.