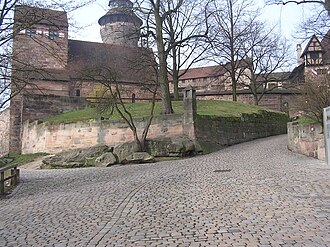 The area of ​​the Nuremberg Burggrafenburg, on the left with the Walburgis Chapel, one of the last remains of the Burggrafenburg.

The burgraviate of Nuremberg was a medieval territory in the Holy Roman Empire . In the 12th century was Burgrave's of the Counts of Raab ruled, in the 13th and 14th century by the Hohenzollern . In 1427 the imperial city of Nuremberg acquired the Burggrafenburg .

The beginnings of the burgraviate of Nuremberg go back to an imperial castle that was built in the first half of the 11th century on a sandstone rock near the Pegnitz . Probably around 1040 King Heinrich III. initiated the construction of this castle complex. With the creation of this base, which is located in the spell of the Reichswald, he pursued the intention of at least somewhat reducing the influence of the Bamberg diocese ; his predecessors had endowed the diocese with generous donations and thus withdrew large parts of the Franconian area from royal rule.

Coat of arms of the Counts of Raabs

Around the year 1105, the Counts of Raabs , who came from a Lower Austrian family, were enfeoffed with the castle and installed as burgraves. In the following period they created the basis for an extensive imperial territory that arose around the castle and was then referred to as the "Burgraviate of Nuremberg".

Expansion of the burgraviate of Nuremberg in 1400

When Konrad II von Raabs, the last Count of Raabs, died around 1190 without male heirs, his son-in-law Friedrich I von Zollern took over his inheritance. Presumably in 1191 he was by King Henry VI. enfeoffed with the burgrave office. With him, a line of the Counts von Zollern, who came from Swabia, came to rule the Burgraviate of Nuremberg. The territory (or the principalities that later emerged from it), which the Zollern acquired during their time as burgraves and subsequently enlarged, they ruled and temporarily some of their side lines until the end of the Old Kingdom in 1806. From the middle of the 14th century the Zollern as Hohenzollern .

With a clever acquisition policy, the Hohenzollern purposefully expanded their territory, especially in what is now Central and Upper Franconia. Through the inheritance of the Counts of Abenberg , they came into the possession of their ancestral castle Abenberg , von Cadolzburg , the old royal estate Riedfeld, the nucleus of Neustadt an der Aisch , and also the patronage of the Heilsbronn monastery . Also by inheritance, they came into possession of the northeastern part of the Upper Franconian possessions of the Counts of Andechs-Meranien with Bayreuth in 1248 . An exemplary financial policy made it possible for the Hohenzollern to make further extensive new acquisitions. In 1285 it came into their possession Wunsiedel, in 1292 Arzberg , 1338 Schauenstein / Helmbrechts , 1373 Münchberg and Hof , 1402 Erlangen and finally 1412 Selb . In doing so, they expanded the so-called "Upper Mountain Country" into a relatively closed territory.

In the “lower mountainous country”, too, the Hohenzollerns succeeded in gaining extensive territory in just a few decades. In 1331 they acquired the bailiwick of the later royal seat of Ansbach . Other acquisitions were the cities and markets Feuchtwangen , Uffenheim , Crailsheim , Creglingen , Kitzingen , Marktsteft , Schwabach , Leutershausen and Gunzenhausen .

Even in Lower Austria , the burgraves of Nuremberg were able to acquire the later so-called “Brandenburg” fiefs , for example Höflein an der Hohe Wand from 1320 to around 1446. As early as 1273, the Hohenzollern was given the imperial district court in Nuremberg by Rudolf I von Habsburg . It developed into one of the most important instruments of their political influence. In the 15th century it was moved to the new seat of government in Ansbach.

Due to the increasing claims to power of the Hohenzollern, there were also increasing conflicts with other imperial estates , such as the Bavarian Wittelsbachers , the bishop of Würzburg and the imperial city of Nuremberg . In 1420 these disputes escalated with the destruction of the Nuremberg Burggrafenburg by the troops of Duke Ludwig VII of Bavaria-Ingolstadt . It was then no longer rebuilt by the Hohenzollern, but sold in 1427 together with the burgrave office of the imperial city of Nuremberg. As early as 1260, the burgraves had moved their residence to the Cadolzburg .

Although the Franconian Hohenzollern still had the suffix “Burggraf zu Nürnberg” in their title, this sale ultimately meant the end of the constitutional existence of the burgraviate of Nuremberg. In the period that followed, the two Hohenzollern margravates of Brandenburg-Ansbach and Brandenburg-Kulmbach emerged from their territory .

In the further development, the former Nuremberg burgraves came from the house of Zollern to Prussia via Albrecht von Brandenburg-Ansbach, who was born in Ansbach . Albrecht of Brandenburg-Ansbach, the 1511 the last Grand Master of the Teutonic Order in the German Teutonic Order was chosen secularized Prussia in 1525 to a hereditary duchy, which later became the Kingdom of Prussia was created, whose kings from 1871 to 1918, the Emperor of the German Reich were.

The burgraves of the von Raabs family have been handed down for the period from 1105 to 1191. The dates in this period are to be understood as approximate. After Konrad II von Raabs died without male heirs, the property passed to the Hohenzollern family through the marriage of his daughter Sophia von Raabs to Friedrich . 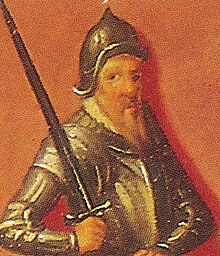 The last burgrave Friedrich VI. He also acted as the first Elector of Brandenburg.

The history of the burgraviate of Nuremberg has a special meaning for the Hohenzollern people . Until the end of the 12th century there was only the Swabian Hohenzollern . First, the Frankish Hohenzollern split off. They acted as burgraves of Nuremberg. In the Middle Ages, a burgrave was subordinate to the king or sovereign. With Konrad I. the Franconian Hohenzollern took on an independent development. Friedrich II. , Previously the burgrave, continued the Swabian Hohenzollern family. The Burggrafenamt and Burggrafenburg were sold to the imperial city of Nuremberg in 1427 . The later Principality of Bayreuth emerged from the unsold "Upper Mountain Land" . The later Principality of Ansbach emerged from the "Untergebirgischen Land" which was not given up either. The first regents were Johann III. of Nuremberg or Friedrich VI. from Nuremberg . Both were sons of Friedrich V, who died in 1398. The younger son Friedrich VI. was also the first elector of Brandenburg . Thus the separation into the Swabian and Brandenburg-Prussian Hohenzollern was completed, as it still exists today. Under Christian Friedrich Karl Alexander , since 1757 Margrave of Brandenburg-Ansbach and since 1769 Margrave of Brandenburg-Bayreuth, the two Franconian principalities of Bayreuth and Ansbach were reunited as the last regent. He was childless and sold the principalities to Prussia in 1791 . Ansbach fell to the Kingdom of Bavaria in 1806 , Bayreuth in 1810.

Between 1357 and 1361 there was a first brief division of the burgraviate of Nuremberg. In 1397 the area was again divided into two parts, which initially remained temporary and lasted until 1420. With this division, two new territories emerged, the "Upper Mountain" and the "Lower Mountain Country". With the mountains to which the names of the two areas referred, the Muggendorfer Mountains were meant, the then common name for Franconian Switzerland .

The Upper Mountain region was mainly in what is now Upper Franconia . This part of the country was also called "land on the mountains and in Vogtland ". In 1437, some sub-mountainous offices ( Neustadt an der Aisch , Dachsbach , Emskirchen , Wernsberg, Rennhofen and Hagenbüchach ) were added to this area for the first time , which were later referred to as the "Unterland" of the Upper Mountain region. After this area expansion, the part located mainly in Upper Franconia was called the "Oberland". The main town of the Upper Mountain Country was initially Bayreuth , but the seat of government was later moved to Plassenburg , located above Kulmbach . The Principality of Kulmbach developed from the Upper Mountain region - from 1604 referred to as the Principality of Bayreuth . The terms Brandenburg-Kulmbach and later Brandenburg-Bayreuth are also used.