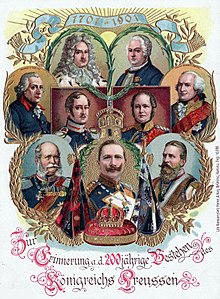 All kings in or from Prussia on a postcard from 1901

The list of rulers of Brandenburg includes princes , margraves , electors and kings who ruled in the territory of the state of Brandenburg from around the 12th century .

King Ludwig appointed his underage son Ludwig the Elder as the new margrave in 1323 , thereby overriding the inheritance claims of Duke Rudolf I of Saxony-Wittenberg.

In 1348 an old man appeared who claimed to be Margrave Waldemar , who had died in 1319 . The new King Charles IV of the Luxembourgers enfeoffed him with the margravate.

In 1350 Ludwig the Elder was enfeoffed again with the Mark Brandenburg by Charles IV.

The Golden Bull of Emperor Charles IV of 1356 attributed the function of Arch Chamberlain in the Holy Roman Empire to the Margrave of Brandenburg and thus one of the seven electors .