This article deals with the Brandenburg Elector, for the submarine commander of the Kriegsmarine see Albrecht Achilles (naval officer) 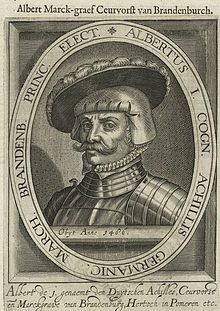 Albrecht I of Brandenburg 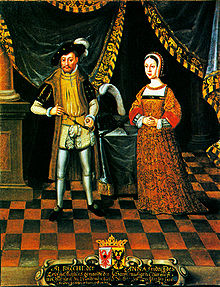 Albrecht Achilles of Brandenburg and his second wife Anna of Saxony

Albrecht von Brandenburg , also known as Albrecht Achilles (born November 9, 1414 in Tangermünde ; † March 11, 1486 in Frankfurt am Main ), from the House of Hohenzollern , was Margrave of Ansbach as Albrecht I from 1440 and Kulmbach from 1464 and later as Albrecht III. Margrave and from 1470 Elector of Brandenburg .

His nickname Achilles goes back to the lawyer and poet Aeneas Sylvius, later Pope Pius II , who called him "the German Achilles " in view of his military successes .

He was the third son of the margrave and elector Friedrich I of Brandenburg from his marriage to Elisabeth von Bayern-Landshut .

In 1434 Albrecht Achilles organized a big tournament in Neustadt an der Aisch , at which the Emperor Sigismund was present (in Neustadt he later resided often and for a long time). Albrecht went on a pilgrimage to Jerusalem with his brother Johannes in 1435, accompanied by Hans Lochner, his father's personal doctor and travel reporter on this trip to Palestine.

After the death of his father in 1440, he first inherited the principality of Ansbach , while his brothers received the remaining territories. Plans that he had for the revival of the Duchy of Franconia could not be implemented, mainly because of the Nuremberg resistance ( Nuremberg City War or First Margrave War , Bavarian War ). When his eldest brother Johann the Alchemist died in 1464, he inherited the Principality of Kulmbach . When his older brother Friedrich II abdicated in his favor in 1470, his margravate Brandenburg, including the dignity of elector and arch chamberlain of the Holy Roman Empire, also fell to Albrecht. He thus united the entire Franconian and Brandenburg property of the House of Hohenzollern.

Albrecht Achilles is one of the most important princes of his time. He moved in politics both as a war leader and as a diplomat. In 1447, in the spirit of the bishops, he had the Hussite preacher Friedrich Müller, who had already preached successfully in the Sugenheim area (Krautostheim, Ingolstadt) in 1446 , captured and brought to Würzburg. After he had taken over the rule in Brandenburg, he managed to victoriously end the long War of Succession in 1472 and to achieve suzerainty over the entire Duchy of Pomerania .

With the Würzburg bishop Rudolf II von Scherenberg and the Bamberg bishop Philipp von Henneberg there was a battle of strength between secular and spiritual power. After he had refused to pay the Turkish tax and had countered himself by levying a “priest's tax ”, he was banned from church and interdict .

In 1459 he established a southern German branch of the Brandenburg Swan Order .

In 1460 he made Ansbach his residence. From 1457 to 1486 he also ruled from the Plassenburg . In 1469 he took over Triesdorf from the Seckendorff family on Mannlehen. Triesdorf later became the hunting seat of the Margraves of Brandenburg-Ansbach.

In 1473 he documented the indivisibility of the Kurmark Brandenburg in the Dispositio Achillea , the Hohenzollern house law. This now fell to the eldest son of the deceased elector. In the same year he handed over the business of government in Brandenburg to Johann Cicero , his eldest son from his first marriage. After his death, his two eldest sons from their second marriage, Friedrich and Siegmund, were to receive his Frankish possessions.

In 1486, despite a serious illness, he took part in the Reichstag in Frankfurt am Main, where Maximilian I was elected king. Under the burdens of the Reichstag, Albrecht Achilles died there on March 11, 1486. ​​On June 19, 1486 he was buried in the monastery church of Heilsbronn . His widow, the Electress Anna of Saxony , moved from Ansbach, where she had initially lived with her son Friedrich, to her widow's seat in Neustadt an der Aisch, determined by Albrecht, and held court there.

Albrecht Achilles was married twice. In 1446 he married Margarete von Baden (* 1431; † October 24, 1457 in Ansbach ), daughter of Margrave Jakob I of Baden . The marriage was not a happy one, however. Margarete died in 1457. The marriage resulted in three sons and three daughters:

In November 1458 he married Anna of Saxony , a daughter of Elector Friedrich II. Of Saxony . With her he had five sons and eight daughters:

Still image in the Siegesallee

The sculptor Otto Lessing erected a statue of Albrecht Achilles as the central statue for monument group 17 in the Siegesallee , which the Berlin population calls Puppenallee . As minor characters the monument were busts of Werner von der Schulenburg and Ludwig von Eyb the Elder (1417-1502), Erbkämmerer and chronicler of the family Eyb assigned. The monument group was unveiled on August 28, 1900. Lessing's portrayal was largely based on the donor picture of Albrecht from the Swan Order Altar in the Gumpert Church in Ansbach. Lessing also underlined Albrecht's knighthood in the Swan Order with an order chain that Albrecht wears around his neck.

(" We Albrecht by the grace of God, Margrave of Brandenburg , Arch-Chamberlain (and Elector ) of the Holy Roman Empire , Duke of Stettin , Pomerania , Duke of the Kashubians and the Wends , Burgrave of Nuremberg , Prince of Rügen ".)