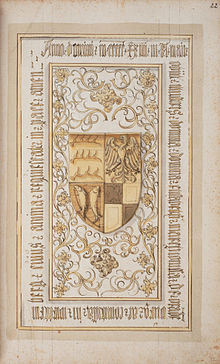 Elisabeth was the second daughter of the Brandenburg Elector Albrecht Achilles (1414–1486) from his first marriage to Margarete von Baden (1431–1457).

In April or May 1467 she married Count Eberhard VI in Stuttgart . von Württemberg (1447–1504). Through the marriage of his daughter, Albrecht Achilles was able to exert considerable influence on his son-in-law. Elisabeth's husband became Eberhard II in 1496 as Duke of Württemberg. The marriage remained childless and was downright unhappy; Elisabeth returned to her father for a long time. On June 11, 1498, Eberhard renounced the duchy in Horb in favor of his nephew Ulrich , with the assurance that Ulrich had to look after Elisabeth as befits his status.

In contrast to her husband, Elisabeth was not expelled from the country, but in the Horber Treaty her maintenance was expressly taken over by the new regent. In 1499 she retired to the widow's residence in Nürtingen Castle. There she was described as pious and benevolent. She did a lot to rebuild the city that had burned down 20 years earlier.