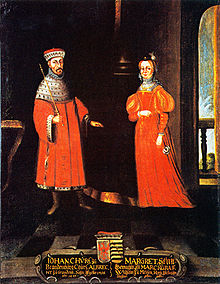 Margaret of Saxony with her husband Johann Cicero, not contemporary painting around 1625, Gripsholm Castle

After the breakdown of her parents' marriage, Margarete continued to live at the court of her father, who also conducted her marriage negotiations. After his death, the Landgraviate of Thuringia fell to Margarete's cousins, the dukes Albrecht and Ernst of Saxony. Her vague claims to the territories of her grandfather Albrecht II had already failed in the person of her parents. In the war against Austria , however, Frederick the Great presented a deduction at the Reichstag in Frankfurt in February 1757 in which he based claims to the Kingdom of Bohemia on the basis of his descent from Margarete .

Margarete married the future Elector Johann Cicero von Brandenburg (1455-1499) in Berlin on August 25, 1476 . The wedding date had been postponed several times due to financial difficulties. Margarete's marriage property could only be paid out in 1492.

In his will, Johann had promised his wife the cities of Spandau, Küstrin , Wriezen , Bötzow , Liebenwalde and Saarmund as personal items and designated Spandau Castle as her home, where she increasingly withdrew.

Margarete had the following children from her marriage to Johann: