Spandau is the eponymous district in the Spandau district of Berlin .

The Spandau district represents the center of the former urban district of Spandau, which was incorporated into Greater Berlin in 1920 . In linguistic usage, location information in Spandau can also be in the directly adjacent buildings in the districts of Wilhelmstadt (Spandau-Wilhelmstadt), Haselhorst (Spandau-Haselhorst) and Falkenhagener Feld (Spandau-Falkenhagener Feld).

Situation in the Brandenburg area around 1150

The Havelland was settled by the Hevellern ( Slavic tribes ) around the 7th century .

The origins of Spandau can be traced back to a Slavic settlement that was built at the confluence of the Havel and Spree rivers. From this dirt conditioning was a fortified until the end of the 10th century castle , the Slavic name is not recorded and therefore in research as " Spandauer Burgwall is called." During excavations, in addition to the remains of a presumed wooden church dated around 980, the cast of the Spandau cross was found. This suggests a Christian reference to this complex. In 1157 the castle wall came into the possession of Albrecht the Bear in the course of the German East Settlement , who had it rebuilt according to his needs (abandonment of the suburbium , new west gate and new Havel bridge). This rampart formed the easternmost pillar of the newly created Mark Brandenburg on the Havel- Nuthe line.

Spandau Castle was first mentioned in a document in 1197 (“Everardus advocatus in Spandowe” in a document from Margrave Otto II ). Apparently it is already about the new Ascanian castle north of Alt-Spandau . The certificate is now in the cathedral museum of the city of Brandenburg an der Havel .

In addition to the castle, a settlement that was attached to the castle developed . When the castle could no longer meet the demands placed on it, it was expanded. In the course of this expansion, the residents were probably relocated to what is today part of the old town of Spandau. 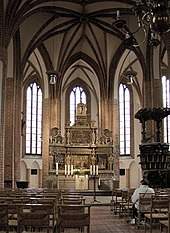 Contrary to popular belief, on March 7, 1232 by the Margraves Johann I and Otto III. issued certificate Spandau not granted the town charter . The text of the certificate - provided the German translation received is authentic, which is in part doubted - rather makes it clear that Spandau already has city rights and that additional rights are granted here - especially the construction of a flood channel, the predecessor of the lock. It does not say when the city charter was granted. However, since the formal securitization of the age of cities by means of a document with the granting of city rights applies and Spandau is mentioned as a city for the first time in the document mentioned, it can only be proven to be a city from 1232 onwards. Spandau continued to grow as a normal city until around 1560, when Elector Joachim II ordered the castle to be replaced by a state fortress. The architect called Rochus zu Lynar built the citadel and himself a castle in the city. The stick war between Spandau and Berlin in 1567 can also be traced back to the Elector. In 1632 the body of the Swedish King Gustav II Adolf was housed in Lynar Castle for one night. His last trip from Lützen to Stockholm .

City and citadel of Spandau in 1633

Cadastral plan of the city of Spandau from 1728 (Intra Moenia)

Tower of the Spandau town hall

Today the hamlet Haselhorst belonging Spandau Citadel was completed in the 1594th From 1626, during the Thirty Years' War , a garrison was stationed in Spandau and the city ​​wall expanded. In 1686 the Lynar Castle became a penitentiary.

Until the end of the 18th century, nothing changed in its status as a military town. This was reinforced by the construction of a rifle factory in 1722 on the orders of King Friedrich Wilhelm I.

From October 24th to 25th, 1806, the citadel was besieged by the French, which moved the Prussians to surrender . During the Wars of Liberation in March 1813, the French- occupied Spandau was besieged by Russian troops. Prussian troops replaced the Russians and began to bombard Spandau and the Spandau Citadel. On April 23, the French announced their surrender and left Spandau. On November 7, 1850, the later American politician Carl Schurz freed the democrat Gottfried Kinkel from prison. In 1859 the Jewish community in Spandau reopened its own burial site on the Schülerbergen. In 1913 a morgue was built according to plans by the architect Steil. On September 15, 1895, the synagogue on Lindenufer was inaugurated in the presence of Mayor Friedrich Koeltze . The Johannisloge to the golden hammer of the Freemasons , which was re-established in 1859, built a lodge house for itself in 1866. In 1878 the name of the city was changed from "Spandow" to "Spandau". The detention center (auxiliary prison) was built on Neuendorfer Strasse from 1877 to 1879. The former Lynar Castle in the old town, on the other hand, was used as barracks for the 3rd Guards Grenadier Regiment "Queen Elisabeth" from 1861 before it was completely demolished in 1898.

In order to protect Spandau from flooding , the Elsgraben was built in 1832 , which led the water to the Havel before the city. The moat , which was navigable until 1886, connected the (old) Spree across from what was then Otternbucht (roughly at the level of today's Reuter power station ) past the flow meadow in Ruhleben and the Schanzenwald with the Faulen See in Tiefwerder , which in turn crossed several arms of the Havel and the Stößensee - still today - is connected to the Havel. With the canalization of the Unterspree in the 1880s, the Elsgraben lost its importance and was gradually filled in until around 1930. Its course is roughly followed today by the Hempelsteig and the Elsgrabenweg.

With the Reich Fortress Act of May 30, 1873, Spandau became a fortress town. One consequence of this decision was the construction of Fort Hahneberg between 1882 and 1888 west of the city, which at the time of completion was already out of date due to the advanced military technology. On January 27, 1903, the deconsolidation was ordered. Now the city could expand. Many public buildings were built on the Hohenzollernring / Askanierring, which was designed as a ring road. 1908–1910 the Roman Catholic Church Maria, Hilfe der Christisten , and in 1911 the Stadtbad Spandau as well as the Royal State Gymnastics Institute and the teachers' college were built. The population of Spandau rose from around 70,000 in 1905 to 110,000 in the war year 1917.

In the 19th century, the arms industry in Spandau was massively expanded. The MG 08/15 machine gun manufactured here became synonymous with the phrase of the same name . During the First World War , this industry was expanded even further, so that by the end of the war Spandau had become an important armaments center of the German Reich .

The first rail connections were made in Spandau in 1846 by the Berlin-Hamburg Railway and in 1871 by the Berlin-Lehrter Railway between Berlin and Hanover .

From 1897 onwards, Siemens & Halske relocated important industrial plants to the northeast of Spandau. Later it grew into a separate district: Siemensstadt .

The Spandau district with its supply facilities is an important business location in Berlin and, on the other hand, also has large areas of forest and water that are used as excursion areas. The Spandau district with the adjacent residential areas can thus fall back on an almost independent urban infrastructure. The cultural center of Spandau is the old town, but little of the old building fabric has been preserved due to the events of the Second World War and a radical renovation in the 1950s.

The redesign of the old town into a pedestrian zone , initiated in 1978, was completed after more than ten years in 1989. The trade in the old town has been under great competitive pressure since 2001 from the neighboring Spandau Arcaden shopping center with its 125 shops. Many visitors to the shopping center are now increasingly visiting the old town.

The most important building in the old town is the St. Nikolai Church , a three-aisled Gothic hall church (15th century), the tower of which has had a reconstructed Baroque hood with Schinkel ornaments based on plans from 1839 since 1989 . The oldest building in Spandau is the Gothic House . It houses an art gallery and you can find out more about cultural events in Spandau. The City History Museum is located in the new armory, a building on the Spandau Citadel. The oldest districts of Spandau, the Kolk , is one of brick masonry rest of the city walls with the following declaration table: "ramparts. Remnants of the old city fortifications from the first half of the d. 14th century ". Not far from the old town, in the neighboring district of Haselhorst, there is the citadel with the Juliusturm , a renaissance fortress that houses various cultural institutions.

Districts of Berlin in the Spandau district