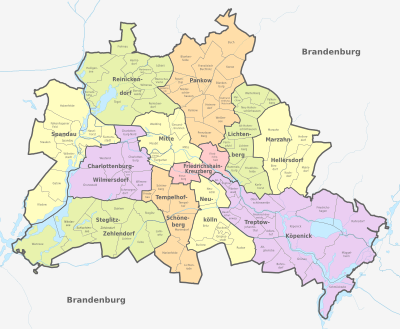 The district self-government has constitutional status (Articles 68–77 of the Berlin Constitution ). It is divided into two administrative bodies, the District Assembly (BVV) and the District Office (BA). BVV than directly by the inhabitants of the district elected representatives ( parliament ) of the "parliamentary" part, the district office leads the administration. Each district office consists of the district mayor (full-time, paid according to the B6 federal salary regulations ) and four district councilors (paid according to the B4 federal salary regulations ). The districts of Berlin can only be roughly compared with rural districts in terms of population . Since the state of Berlin as a city-state is a unified municipality , there is no administrative level of the district in Berlin. The districts are not independent local authorities with their own legal personality - they do not even have the status of a municipality . Rather, it is a matter of “self-governing units in Berlin without legal personality” (Section 2 (1) of the District Administration Act). 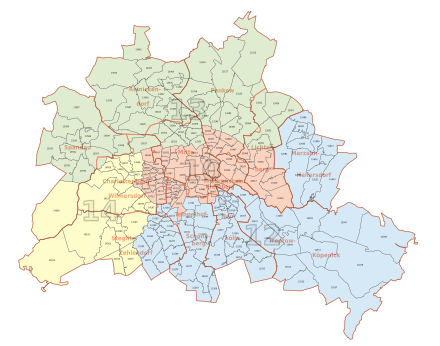 The zip code areas in Berlin

Up until the year 2000 there were 23 districts in Berlin. In the course of the last administrative reform (district area reform ) in 2001, the number was reduced to twelve by merging two or three districts. Spandau , Reinickendorf and Neukölln , which already had over 200,000 inhabitants, were excluded from the district merger .

Subdivision of the districts into districts

The subdivision of the administrative districts into districts is based on the Greater Berlin Act of 1920 , which is still in force :

Section 29, Paragraph 1: "By a unanimous resolution of the district assembly and the district office, an administrative district can be divided into local districts (Section 60 of the City Code) with the approval of the magistrate."

According to the Greater Berlin Act, the previous rural and urban communities became districts. If old communities were divided by the new district boundaries, corresponding districts were created for the individual parts. The district of Charlottenburg, which emerged from the city of Charlottenburg, was the only district that emerged from a single city without subdivision into districts, while the Friedrichshain district was the only " old Berlin " district with districts (Friedrichshain and Stralau ).

Over the years, there have been repeated changes to the district boundaries, smaller districts were dissolved and newly created settlements removed from existing districts (even if often only years later). There were major waves of change in the context of the district reform in 1938, in the early 1950s and as a result of the formation of the new large districts between 2001 and 2004.

From 1965 onwards, no districts were designated in East Berlin , and when the new districts were formed from 1979 onwards, no consideration was given to the former district boundaries. Only after reunification were the old districts re-established - adapted to the changed district boundaries - this led to the special situation that the Malchow district existed twice - in the Hohenschönhausen district as well as in the Weißensee district . The latter was then renamed in 2001 in the suburb of Malchow .

In the districts established in 1920, the settlement structure of the villages that emerged in the Middle Ages was essentially reflected. Several of the changes since 2001 react pragmatically to the massive construction of new apartments in the context of high-rise housing estates between 1961 and 1989. In West Berlin, this applies not only to the Hansaviertel (1960), but also to the Gropiusstadt and the Märkisches Viertel . The more extensive new construction activity in East Berlin, on the other hand, had led to the formation of new districts since the late 1970s (Marzahn, Hellersdorf, Hohenschönhausen). In 2012, Borsigwalde , previously located in Wittenau , was declared an independent district of the Reinickendorf district and thus the 96th district of Berlin.

History of the urban division of Berlin 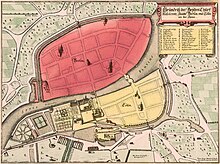 Berlin and Kölln on the Memhardt Plan (northeast above) 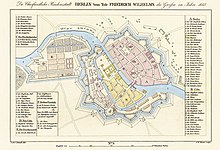 The fortress Berlin to the west upstream Dorotheenstadt 1688 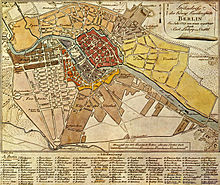 The ten districts of Berlin in the 18th century

In the 13th century both Berlin and Kölln received city rights. As early as 1307 a joint magistrate of the two cities was formed, which were also surrounded by a common city ​​wall . For reasons of power politics, Elector Friedrich II obtained the renewed separation of Berlin and Kölln into two independent cities in 1442. Based on the experiences of the Thirty Years War , the Great Elector Friedrich Wilhelm had a large fortress built from 1658 to 1683 , which included Berlin and Kölln as well as the suburbs of Friedrichswerder in the west and Neu-Kölln in the south. Friedrichswerder received its own magistrate, while Neu-Kölln was administered by Kölln.

Berlin in the 18th century

The building of the fortress proved to be outdated at the time of its completion, because further new suburbs had already emerged outside the ramparts. In 1710 the previously formally independent cities of Berlin, Kölln (with Neu-Kölln), Friedrichswerder, Dorotheenstadt and Friedrichstadt were united to form the royal capital and residence city of Berlin . Together with the other former suburbs included by the customs and excise wall, Berlin consisted of a total of ten districts in the 18th century:

Municipal division in the 19th century

The introduction of the Prussian town order as part of the Stein-Hardenberg reforms brought radical changes to the municipal administrative structure of Berlin. The new town order envisaged dividing larger towns into districts with several thousand inhabitants. Berlin was initially divided into a hundred districts, which initially also had their own names; for example, there was the Hallesche-Thor district, the Spittelmarkt district and the Monbijou district.

The number of districts increased over time as the population grew. After the city expansion in 1861, there were 270 districts that no longer had names, but were only numbered consecutively. In 1884 there was a new division into 326 districts, the number of which increased to 328 by the time Greater Berlin was formed in 1920.

The districts were grouped into districts , although there were no significant municipal institutions at the district level. In the course of the 19th century, more were added to the old ten districts. The Friedrich-Wilhelm-Stadt was separated from the Spandau suburb in 1828 and has since formed its own district. In the area of ​​the city expansion from 1829 to 1841, the Rosenthaler and Oranienburger Vorstadt were created in the north and the Friedrichsvorstadt in the southwest .

In 1861, with the incorporation of the Weddings , Gesundbrunnen and Moabit as well as the Tempelhofer and Schöneberger Vorstadt, the most extensive urban expansion to date was carried out. Existing city districts also extended to some of the incorporated areas; so the Luisenstadt, the royal city and the Stralauer Vorstadt grew beyond their old outer borders. The last incorporations before the formation of Greater Berlin included the Great Zoo in 1881, the area of ​​the Central Cattle Farm in 1878 and parts of the Plötzensee manor district and the Rehberge , which were incorporated in 1915.

The following 21 historic districts existed until 1920

The district reform of 1938 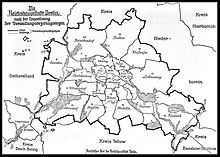 Border changes in the Berlin districts on April 1, 1938

With effect from April 1, 1938, numerous straightening of the district boundaries and some major area changes were made. This came among other things

Already in 1928 and 1937 there had been shifts between Schöneberg and Tempelhof.

Immediately after the end of World War II , for reasons unknown today , the Soviet military administration made Friedenau the 21st district between April 29 and June 30, 1945 with Willy Pölchen ( KPD ) as district mayor; after that, Friedenau became a district of Schöneberg again as before. Correspondingly, the Friedenau District Court existed at the time .

Time of the division of Berlin

At the Yalta Conference , the Allies had already agreed to divide Berlin into sectors (later: four- sector city ), the sector boundaries being based on existing district boundaries. Although Berlin was initially to be administered jointly after the Second World War, the irreconcilable differences between the Western Allies and the Soviet Union led to the city being divided. With a time lag, the two separate administrations of East and West Berlin developed from this .

In East Berlin in 1952 the term “district” was replaced by the “ city ​​district ” in order to separate it from the “districts” created at the same time in the GDR .

Due to the establishment of large new building areas in the east of the city in the 1970s and 1980s, three new districts were created in East Berlin in addition to the number of 20 districts set by the Greater Berlin Act of 1920: Marzahn (1979 from the Lichtenberg districts of Marzahn , Biesdorf , Kaulsdorf , Hellersdorf and Mahlsdorf ), Hohenschönhausen (1985 from parts of Weißensee) and Hellersdorf (1986 from parts of Marzahn). In order to maintain the independence and appropriate size of Weißensee as a district, the Pankow districts ( Heinersdorf , Blankenburg and Karow ) were divided into Weißensee when Hohenschönhausen was separated . 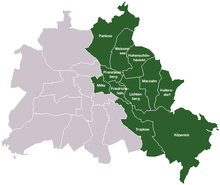 (the ordinal numbers in square brackets)

Division between reunification (1990) and district reform (2000)

After the reunification of Germany and Berlin in 1990, all districts were initially continued unchanged and again consistently called district . Until 2000, the now 23 districts had very different sizes and populations. As part of the administrative reform in 2001, twelve new districts were created through the amalgamation of districts, which - similar to the method of counting according to the Greater Berlin Act ( see above ) - were numbered using a so-called district key. Usually two previously independent districts were merged into a new district, only the districts of Neukölln, Reinickendorf and Spandau remained unchanged. The newly structured districts of Pankow and Mitte each emerged from three previous districts. In the Friedrichshain-Kreuzberg and Mitte districts, districts of the former East and West Berlin were merged into new districts. The dispute over the district name and the district coat of arms lasted for a long time in some of the new districts. Many names of public institutions still refer to the old districts. The Tiergarten District Court , the Tiergarten public swimming pool and the Wedding District Court are located in the newly merged Mitte district, namely in the districts of Moabit and Gesundbrunnen. The traffic signs are also often based on the older, more detailed district names.

Lists of districts by federal state