This article deals with organized public administration. For the journal, see The Public Administration .

Public administration has certain characteristics and, according to Ernst Forsthoff, can be described rather than defined.

The agents of the administration are the authorities , which are structured hierarchically . The execution control ( service , legal and technical supervision ) is the responsibility of the respective higher authority or the top management. The highest authorities at the federal and state level are the ministries , the top administration is the respective minister . In the system of separation of powers, the top management is accountable to an elected body ( parliament ), for example the mayor as the main administrative officer of the city ​​administration to the local council .

Administration in the organizational sense

Management in the material sense

Administration in the material sense is state activity that has the material perception of administrative matters as its object, regardless of the administrative agency or body involved. Previous attempts to define the term did not fully delimit the term or were differentiated, but very abstract.

According to this, public administration in the material sense is, for example, "the manifold, conditional or only purpose-determined, i.e. insofar externally determined, only partially planning, self-involved, decisive executing and shaping perception of the affairs of communities and their members as such by the community administrators appointed for this purpose" or "as the organs of executive power and certain legal entities assigned to them, independently responsible and constant execution of the tasks of the community through concrete measures in legal connection according to (more or less specified) a given purpose. "

Administration in the formal sense

The administrative law covers all legal norms relating to the structure, responsibilities and powers of the administration and the legitimacy of the stage for their activities.

In contrast to these legal norms with external effect , administrative regulations ( decrees , circulars , service instructions ) have basically no effect on the citizen. As so-called internal law, they only regulate internal processes within an administrative body, such as the cooperation between various organs . Exceptions can result from the self-commitment of the administration .

Based on the historically oldest task of protecting the respective territory externally and internally and securing its financial basis, intervention management ( regulatory and tax management ) is one of the classic fields of action of public administration. In the 19th century came Steering administration for promoting economic prosperity through trade and industry, and finally the power management of a modern welfare state added that the social security of citizens through support of individuals (eg. As social assistance ) and the provision of public services of general interest guaranteed.

The demand management is the procurement of staff and equipment for the management activity.

Recently, the public administration has also been expected to perform its tasks “ sustainably ”. 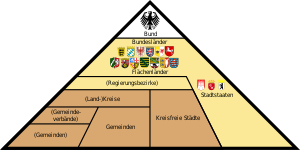 A total of around 4.2 million civil servants and employees are employed in the German public service . 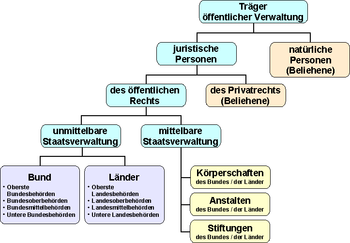 The direct federal administration is entrusted with the implementation of all matters which, according to the Basic Law , fall under the jurisdiction of the federal government ( Art. 87 to Art. 89 GG). It has a total of 316,500 employees. Below are some federal authorities and their number of employees:

There is also the indirect federal administration. This includes the employees of corporations, institutions and foundations under public law under federal supervision and the employees of the Bundesbank .

The federal administration has given up a considerable proportion of its employees since 1990. First of all, the postal reform transferred all employees of the postal authorities to the private-law units of Post , Telekom and Postbank ; with the railway reform , the former authority of the Federal Ministry of Transport was also transferred to private structures (with the exception of the federal railway assets ). In addition, German air traffic control was privatized.

Since the states are entrusted with the vast majority of administrative tasks in Germany ( Art. 30 GG), the state authorities and the affiliated companies are the outstanding part of public administration in terms of staffing levels. 2.3 million people work in the 16 German state administrations, specifically:

The municipal task structure distinguishes between:

The municipalities of an area are counties (in some countries circles called) joined forces to cope more effectively to higher-level tasks (in particular mandatory tasks). From a certain number of inhabitants, which varies depending on the federal state , cities are independent. In addition to districts, there are other municipal associations for special tasks , such as the landscape associations in North Rhine-Westphalia and Lower Saxony . The supervisory bodies of these corporations are made up of local representatives and are financed by contributions from the local budget .

In summary, the local governments employ 1.57 million people, divided into the following areas:

If public administration tasks are transferred to natural or legal persons under private law, one speaks of lending .

The demarcation of public and private law is judged according to the modified subject theory .

Forms of action by the administration

The reform goals are both to increase effectiveness and citizen-friendliness as well as to consolidate the budget . Due to the sometimes enormous downsizing, which can only be absorbed to a limited extent by privatization or the use of modern office communication technologies, structural adjustments in the administrative organization are often necessary in addition to administrative process optimization. Whether this can compensate for the downsizing depends on the individual case.

A basic distinction can be made between functional reforms in the distribution of tasks, administrative structural reforms such as the enforcement of territoriality and regional reforms .

The strict hierarchy leads to an authoritarian structure within the administration. Authorities therefore often work in a way that is based on a division of labor and decisions follow fixed official channels . The management of the administration is therefore very formal and, due to its politically oriented management top, is not essentially geared towards economic goals. The lack of economic principles can also be seen in the fact that the financial system is organized in a cameralist manner: budgets are often politically negotiated. At least in the area of local government , the budgets in almost all federal states are currently being converted to commercial bookkeeping ( new communal financial management ).

A factor that is increasingly viewed as a problem today is the regulatory incentive system. Since everyone should have access to the public service and the services of the administration have no market, the administration uses auxiliary variables ( assessments ). In these assessments it is not always clear which services are expected and to what extent good behavior is rewarded. In the absence of a performance definition, there are no performance-related incentives, particularly of a monetary nature. Instead, internal prestige is often measured in terms of the size of the authorities, departments or budgets. The civil service law reflects the requirements of the Basic Law on public employees. For those inexperienced in administrative matters, it is seen as a hindrance to administrative innovations or professional initiatives. Changes are on the way here due to the introduction of elements of modern personnel management in public administration. The new TVöD provides incentives for employees in the public sector , and these are also to be transferred to civil service law.

Initiated by the Maastricht Treaty and the latest EU expansion to the east , the European administrative area is currently characterized less by a common policy than by intensive scientific research into individual developments and the attempt to systematize and control them.