The Federal Office for Building and Regional Planning ( BBR ) is a German higher federal authority and as such subordinates to the Federal Ministry of the Interior, Building and Home Affairs (BMI). The BBR is headquartered in Deichmannsaue Castle in the federal city of Bonn ( Rüngsdorf part of the Bad Godesberg district ). The authority has its neighboring seat in the Ernst-Reuter-Haus in Berlin (district Charlottenburg of the district Charlottenburg-Wilmersdorf ). The BBR employs around 1250 people, 180 of them at the Federal Institute for Building, Urban and Spatial Research (BBSR). Around 400 employees have their permanent office in Bonn, the rest in Berlin properties.

The Federal Office was created in 1998 by merging the Federal Building Directorate (BBD) and the Federal Research Institute for Regional Studies and Spatial Planning (BfLR) and was expanded to include Federal Building Authorities I and II of the Oberfinanzdirektion Berlin on January 1, 2004. The BBR looks after the most important federal buildings in Germany and abroad and supports the federal government with technical and scientific advice in the fields of building and housing, spatial planning and urban development . The BBR is a member of the working group of departmental research institutions .

Since 1998 the office has been publishing a yearbook entitled “Construction and Space”, in which the most important federal construction and research projects are published. The yearbook appears in German / English and is available in bookshops.

The BBR is headed by the President as head of the authority . Previous incumbents:

Construction area of ​​the Federal Office for Building and Regional Planning

Around 800 of the total of 1250 employees work in the construction division of the BBR. The range of tasks in the construction sector ranges from large-scale construction sites to issues relating to building culture and the preservation of monuments to architecture competitions . The federal buildings in Berlin, Bonn and abroad as well as the building work of the Prussian Cultural Heritage Foundation are accompanied from the first idea to the handover of the finished building. The range of services extends from general user advice to project development, real estate appraisal, infrastructure and energy concepts to the implementation of construction work of all sizes. Federal construction measures as well as funding measures or projects in PPP models are supervised.

In Bonn and the surrounding area, the main task is to look after the buildings of the first and second offices of the Federal Government, including the headquarters of the Federal Ministry of Defense on the Hardthöhe , subordinate offices and cultural buildings such as the House of History and international organizations. A particular focus here is the development and expansion of the UN campus for United Nations institutions . Outstanding building projects coordinated by the BBR in Bonn are, for example, the new building of the plenary area for the German Bundestag by Günter Behnisch, the art and exhibition hall of the Federal Republic of Germany by Gustav Peichl and the radio house of Deutsche Welle by Joachim Schürmann. In addition, the BBR outside Bonn is responsible for the Petersberg guest house (former federal guest house) in Königswinter and the Federal Chancellor Adenauer House Foundation in Bad Honnef - Rhöndorf .

In Berlin, the BBR oversees the political capital buildings, cultural building measures and buildings of the Prussian Cultural Heritage Foundation as well as buildings of the Bundeswehr, subordinate federal authorities and research institutions.

Illumination of the Ernst Reuter House

In Berlin, after the decision to relocate the seat of parliament and government (1991) , the BBR oversaw the construction of new offices for all federal ministries and constitutional bodies , with 90 percent of all accommodation being in old buildings. The oldest building in Berlin, the Invalidenhaus of Frederick the Great , today serves the Federal Ministry of Economics and Technology , the Foreign Office is located in the former Reichsbank , the Ministry of Labor and Social Affairs in the former Reich Propaganda Ministry and the plenary session of the Bundestag meets in the Reichstag building. The Federal Council moved into the old Prussian mansion and the Federal President moved into Bellevue Palace .

The major construction measures for the highest federal authorities are focused on the expansion of existing offices that has become necessary and the relocation of federal ministries to central locations. These new buildings and extensions for the Federal Ministries, the Federal Chancellery and the Bundestag are role models for energetic, sustainable building and, as designs that have mostly emerged victorious from international competitions, meet high architectural standards.

The Bundestag administration, however, clearly criticizes the work of the Federal Office. Accordingly, the construction times for projects carried out by BBR are extended by five to eight years and cost an average of 55% more than estimated. The Federal Office must therefore be “relieved considerably”. A Bundestag building that has not been completed for five years is threatened with demolition. The BBR was therefore withdrawn from other Bundestag building projects.

In addition to the culturally outstanding capital buildings, such as the Humboldt Forum in the Berlin Palace , which is to be rebuilt in the historic center of Berlin, the German Historical Museum and the Topography of Terror Foundation , the BBR also oversees the construction work of the Prussian Cultural Heritage Foundation. As part of a long-term construction program, the buildings of the Berlin State Museums such as the World Heritage Museum Island and the Ernst von Ihnes State Library on Unter den Linden are being repaired and supplemented with the help of internationally renowned architects. The museums in Dahlem and the Kulturforum with the New National Gallery by Mies van der Rohe and Scharoun's State Library are also looked after by the BBR.

Another focus of the BBR construction division is the support of large research institutions. These include the Physikalisch-Technische Bundesanstalt and the Federal Institute for Materials Research and Testing in Berlin-Steglitz and at the science location Berlin-Adlershof as well as the Federal Office for Radiation Protection in Berlin-Karlshorst . For these research facilities, new construction, expansion and reconstruction of entire institute buildings as well as individual special laboratories from the physical, medical or chemical field are carried out. The Robert Koch Institute is currently getting a new building in Berlin-Wedding with high security laboratories up to the highest security level of category S 4.

The Bundeswehr's construction work in Berlin is concentrated on the Bendlerblock , where the BBR also oversaw the competition and the erection of the Bundeswehr memorial , as well as the Bundeswehr hospital , the Julius-Leber , the General-Steinhoff , the Blücher and the Dahme -Spree barracks . The military area also includes construction work for the Federal Academy for Security Policy and for Bundeswehr facilities at Tegel Airport , the former Tempelhof Airport and the new Berlin Brandenburg Airport in Schönefeld .

In addition to its core tasks of building and research, the BBR also provides the central nationwide program center on behalf of the BMUB for special economic and energy policy programs. The implementation of urban development, architecture, landscape architecture, art in architecture and design competitions by the BBR contributes to technical and cultural development. With the support of domestic funding measures from the social and educational sector and from the field of cultural and political foundations, the Federal Office is devoting itself to another important task. In addition to specific planning tasks in the building construction sector, the range of tasks also includes project developments, long-term target planning for federal properties, including feasibility studies , profitability studies and implementation strategies .

A cross-sectional department for construction-specific services takes care of all construction-related and construction-related fundamental issues in the BBR. She advises the construction departments and supports them in handling projects. Project developments, long-term target planning for federal properties including feasibility studies, profitability studies and implementation strategies support active construction operations. Instruments for quality assurance and risk management are being developed, higher-level tasks for cost management are being performed and building software is also being made available to other federal authorities. Overall, the maintenance and development of quality is in the foreground in all construction work. The obligation to use public funds responsibly is also followed up. The fulfillment of this responsibility is supported by a higher-level construction controlling. 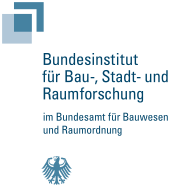 Logo of the BBSR

The Federal Institute for Building, Urban and Spatial Research in the Federal Office for Building and Regional Planning , BBSR for short , is effective from January 1, 2009 by merging the scientific area of ​​the Federal Office for Building and Regional Planning (BBR) with the integration of the Institute for Conservation and Modernization of buildings e. V. (IEMB), Berlin. As a departmental research institution, it supports the Federal Ministry for the Environment, Nature Conservation, Building and Nuclear Safety (BMUB) and other federal departments in the policy areas of urban development , spatial development, urban planning, the housing and real estate market, and building and building culture on a national and European level. The head of the institute in Bonn's Deichmannsaue Castle was until May 31, 2017, the lawyer Harald Herrmann. From 2009 to 2011 the BBSR was headed by the urban planner Elke Pahl-Weber.

The BBSR is part of the spatial information architecture of the Federal Government and provides information, research results and analyzes, expertises and reports for politics and the public. It oversees the departmental research programs of the BMUB, the results of the scientific monitoring of model projects support the discussion of new concepts, and studies prepare legislative proposals at national and European level. The programs of urban development funding and other funding measures of the BMUB are further developed through monitoring and evaluation .

The spatial planning and urban planning departments as well as building and housing form the two pillars of the institute.

Duties of Department 000001I - Spatial Planning and Urban Development

Subordinate division of the Federal Ministry of the Interior, Building and Home Affairs (BMI)