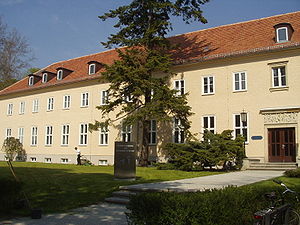 The Federal Academy for Security Policy (BAKS) is the cross-departmental training center in the Federal Republic of Germany in the field of security policy . The commissioning board of trustees is the Federal Security Council . BAKS is based in a complex of buildings belonging to the Schönhausen Palace complex in Berlin-Niederschönhausen .

In order to continue to fully fulfill its security policy tasks in the future, the BAKS has been based on the following academy concept since 2015:

Public discourse and communication
What is new is the opening of the security policy discourse to the wider public. For this task, the "Communication" area was initially created; Since autumn 2015 it has been further professionalized and is called “Communication and Public Discourse”. With traditional press work, public relations, internet editing, social media and citizen dialogues as well as the promotion of security policy youngsters, one of the main pillars of the academy's work has now established itself.

The teaching
The core seminar is aimed at employees from federal ministries who are to be prepared to take on key presentations on security policy. The course is open to comparable participants from business and society. The management seminar for management personnel from the state, business and society is intended to give the participants the opportunity to deepen their knowledge of complex security issues in an intensive exchange phase of three weeks.

Specialist events and international collaborations
Every year the BAKS organizes around 70 events with around 4,000 participants. For the national and international specialist level, the Federal Academy will be expanded as a platform for questions of future security policy and strategy. This is intended to strengthen the trusting exchange of views between experts.

Since the mid-1980s, a national training institution for the discussion and dissemination of security policy topics has been discussed, as it already existed in other countries (for example the National Defense University in Washington, DC , the Institut des Hautes Etudes de Défense Nationale in Paris or the Royal College of Defense Studies in London ).

In the summer of 1987 the Federal Security Council dealt with the question of an institution for the first time and decided on the following basic demands for such an institution:

Ceremony for the 20th anniversary of the two-plus-four contracts

In 1992 the academy began its work under President Admiral a. D. Dieter Wellershoff in the Rosenburg in Bonn. At the same time, an advisory board was set up to accompany the work of the academy primarily with recommendations for the structuring of teaching.

In 2002 the board of trustees decided on the recommendation of the advisory board and the academy to finally move to Berlin. After extensive construction and renovation work, the new property in the Schönhausen palace complex in Berlin-Pankow was moved into in March 2004.

Since March 2004, the Federal Academy for Security Policy has had its own facility with lecture halls, conference rooms and offices integrated into the park of the Schönhausen palace complex. With the move to Berlin, the demands on the academy increased enormously and made a new structure necessary, which was introduced in 2007.

In April 2015 the working group “Young Security Politicians” was founded together with the Friends of BAKS eV, which promotes the targeted networking of young specialists and executives from politics, authorities and society and involves its members in the work of the Federal Academy.

The President and Vice President of the Academy are alternately nominated by the Foreign Office and the Federal Ministry of Defense. In addition to the management, the academy consists of a study area and a support area. Since February 2016, the management has consisted of the President, the Vice-President and the Director of the three department heads (communication, specialist events, seminars). The employees of the study area are sent by the ministries that belong to the Federal Security Council (Foreign Office, Federal Ministry of the Interior , Justice , Finance , Economy and Energy , Defense and Economic Cooperation and Development ).

The Board of Trustees is composed of the members of the Federal Security Council chaired by the Federal Chancellor and decides on fundamental issues of the Academy. An advisory board has the task of advising the board of trustees on all questions of interdepartmental security policy training. The advisory board includes people from politically and socially relevant areas. Currently, with the constitution of the 6th Advisory Board in September 2012, these are, for example, Professors Herfried Münkler and Joachim Krause and people like Jörg Schönbohm and Walter Wakenhut .

With the realignment of the BAKS, the website has become the media hub of the academy work. At www.baks.bund.de, readers can find out about the latest findings from the seminars and specialist events. In addition, a wide range of information is provided with the working papers on security policy, the information letters and the statements of the academy management. If you wish, you can also subscribe to this free of charge by email.

Every two years, the BAKS awards the Karl Carstens Prize , which is named after the former Federal President, through the BAKS Circle of Friends . It honors personalities "who have made a particular contribution to promoting security policy issues in German-speaking countries and communicating a broad approach to modern security policy to the public". The award ceremony alternates with the “Manfred Wörner speech”. This is intended to recall the tradition of memorial speeches and the former Federal Minister of Defense and NATO Secretary General Manfred Wörner , as well as promoting the security policy dialogue.

From 2005 to 2013, a security policy analysis was developed, discussed and presented by the participants in the earlier security policy seminar. The following work was done:

Higher command authorities and services of the armed forces base