This article deals with the rank of admiral. For other meanings, see Admiral (disambiguation) . 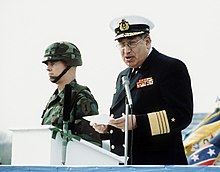 Admiral ( plural : admirals , also admirals ) is a rank of the naval forces in most states and at the same time the collective name for the rank group of flag officers , i.e. all admiral ranks. 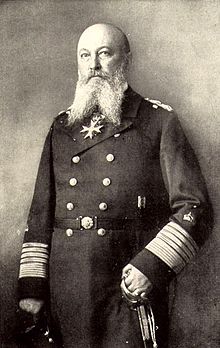 The name is derived from the Arabic أمير البحر / amīr al-baḥr  / ' Commander at sea'.

In the 10th and 11th centuries, naval leaders in Greece ( Byzantine Empire ) carried the designation Amiralios (roughly equivalent to the degree of admiral), while the army leaders were called Amiras (roughly general); both terms are derived from the same Arabic word root amir . In the 12th century the commanders of the fleets of Genoa and Sicily received the name, in the 13th century also those of England and France , which the other European states later followed.

In German, the word was initially used from the 12th century in variants such as amiral, ammiralt, admirat and the like. evidenced, initially in the meaning of 'Muslim commander', 'caliph'. From the 14th century it was borrowed from the French with the new meaning 'Fleet Commander'.

The designation "Admiral", as the last instance in a fleet, was not limited to military units . Up until the 17th century, one of the members could be elected admiral in convoys from merchant ships in a captain's or skipper's meeting. This association then sailed in an admiralty . The commander of a convoy ship could also become an admiral. This captain could be the commander of a city , a sovereign or a private warship . If he was employed or accepted by the merchant captains for their protection, ie if they paid appropriate taxes - the so-called "convoy money" - he became the admiral of this protected convoy . Here, too, one sailed in an admiralty.

Armed forces of the German states

In the Reichsmarine from 1922 to 1935 the ranks rear admiral, vice admiral and admiral were awarded.

To the rank of admiral in the navy was the equivalent of the general of the armed forces in the army and air force .

In the naval forces and the People's Navy (from 1960) of the GDR there were three admiral ranks: rear admiral, vice admiral and admiral. With the decision of the State Council of the GDR on March 25, 1982, the rank of Fleet Admiral , equivalent to Army General , was created, but never awarded.

The admiral was the second highest rank of admiral in the People's Navy of the GDR . He corresponded to the Colonel General of the NVA. The rank badge consisted of shoulder pieces with a navy blue background and a braided gold-silver cord on which three pentagonal silver-colored general stars ("pimples") were attached. Shoulder pieces were worn with all parts of the uniform. The sleeve badge consisted of a wide yellow stripe and three other simple stripes. Above it was a five-pointed star, inside of which was the coat of arms of the GDR. In contrast to all other German naval forces, the sleeve badges only covered about 40% of the sleeve circumference. The admiral's collar tabs showed a gold-colored tendril that had an angle of 90 ° at the lower end.

Waldemar Verner , Wilhelm Ehm and Theodor Hoffmann were the only admirals in the People's Navy. One was promoted to this rank only in connection with the position of the Minister of National Defense or his deputy. Until 1989, the head of the People's Navy was also deputy minister. Theodor Hoffmann was promoted to admiral on the occasion of his appointment as Minister for National Defense and retained the rank as head of the National People's Army under the Minister for Disarmament and Defense Rainer Eppelmann . Waldemar Verner was promoted to admiral during his time as head of the main political administration , also deputy minister.

The admiral is one of the ranks of the Bundeswehr for naval uniform wearers . The legal basis is the order of the Federal President on the rank designations and uniforms of soldiers and the Soldiers Act .

Within the command structure of the Armed forces Navy no service positions are deallocated for admirals. For example, the inspector general of the Bundeswehr can be an admiral. Another possibility is the use in higher staffs of NATO . So far there have only been five officers in the rank of admiral .

See also : List of German admirals  and top military structure of the Bundeswehr

The rank badges of the admiral show a hand-width, three medium- width sleeve stripes on both lower sleeves .

The rank designation for air force and army uniform carriers of the same rank is General . With regard to the authority to command, appointment , pay , positions , the subordinate and superior ranks, admirals and generals are on an equal footing. Both ranks were newly created by the order of the Federal President on the rank designations and the uniform of soldiers on May 7, 1956.

Use as a collective term

According to Duden, the plural is admirals or admirals, with the plural form “admirals” predominating in colloquial language (usually also in the parlance of the Bundeswehr ).

According to the Central Service Regulation (ZDv) A-1420/24 "Ranks and Rank Groups" there is no rank group "Admirals" or "Admirals". Rather, the higher naval uniform bearers belong to the rank group of the generals . Nevertheless, the plural is used as a collective term for several ranks in addition to a summary of several soldiers in the rank of admiral. Due to the unofficial nature is not always clear whether admirals says only all the soldiers who are addressed as Admiral (so only the ranks Rear Admiral , Rear Admiral , Vice Admiral and Admiral) or beyond all other naval uniform carriers (including relevant medical officers ) of the rank group of Includes generals.

The first English admiral in the Royal Navy was William of Leybourne , who was appointed Admiral of the sea of ​​the King of England by King Edward I in 1297 . The admiral as a naval officer must not be confused with the office of Admiral of England or Lord High Admiral , the holder of which was responsible for the entire navy, i.e. a naval minister in today's sense.

In the Royal Navy there was the function of Vice and Rear Admirals ( Vice or Rear Admirals ), who were originally deputy to the commanding admiral, since the 16th century . A commanding admiral could lead his fleet from the top or from the center. If he was on a ship in the middle of the fleet, he was headed by a deputy, the vice admiral. He had another deputy in the rear area opposite the tip, the counter or rear admiral (from Latin contra , against, or English rear for behind).

In the Elizabethan era , the fleet was so large that it in squadron ( squadrons are divided) had. The admiral's squadron had a red stand , that of the vice-admiral a white one, and that of the rear admiral a blue one. After these squadrons grew more and more, each of them was led by an admiral with a vice and a rear admiral. The names for the commanders were then Admiral of the White , Admiral of the Blue , etc.

The ranking of the fleets and thus also their admirals was in descending order: red, white, blue. The promotion to admiral was based on seniority as captain and was valid for life. Accordingly, one could only be promoted if the holder of the higher rank had died or had said goodbye. Another option was to promote an incompetent admiral, or one who had aroused the displeasure of the lords of the admiralty, without command. This practice was referred to as yellowing and the person thus cleared out of the way as the yellow admiral .

The ranking of the flag officers / admirals (descending)

When Lord Nelson died, he was Vice Admiral of the White .

In the 18th century one began to occupy the originally nine posts with several owners.

In 1864 the division of the fleet into different colored divisions was completely abandoned. The red flag was assigned to the merchant marine , the white to the navy and the blue to the reserve and auxiliary ships.

Today the ranks of the flag officers of are Royal Navy of Rear Admiral , Vice Admiral , Admiral and Admiral of the Fleet . Since 1996 the rank of Admiral of the Fleet is no longer awarded in peacetime. Exceptions to this rule are only made for members of the royal family. The fleet admirals appointed before this date, however, retain their rank for life.

The rank of Commodore (German until 1945 Commodore, today roughly Flotilla Admiral) was not an admiral rank in the Royal Navy until 1996, but a designation for a senior captain, which was omitted after leaving the post. Since 1996 the rank “Commodore” is an official rank in the Royal Navy. He is superior to the captain and subordinate to the rear admiral (NATO code: OF 6).

The Russian naval fleet has had the following admiral ranks since 1992.

Only once was the title Amiral de la flotte (Admiral of the Fleet) awarded to François Darlan again in 1939 .

Today ( Law of 1972 ) the title of Admiral of France is a state dignity that has not previously been conferred.

A US admiral's peaked cap with double oak leaf decoration

The United States Navy had no admirals at all until 1862, although the establishment of this rank was repeatedly requested, including by John Paul Jones , who believed that the commanding naval officers should be on a par with the army generals. He also considered higher-ranking officers necessary to avoid or settle disputes between the senior captains.

The various naval ministers repeatedly proposed to Congress to create the rank of admiral in order to achieve equality with the navies of other countries, because the senior officers of the US Navy repeatedly got into protocol difficulties with officers of other nations. Finally, on July 16, 1862, Congress approved the appointment of nine Rear Admirals , but this had less to do with adapting to international requirements than with the rapidly growing strength of the Navy in the American Civil War . Two years later, Congress allowed one of the new rear admirals, David Farragut , to be named vice admiral. In July 1866 he authorized US President Johnson to appoint Farragut as admiral and David Dixon Porter as vice admiral. When Farragut died in 1870, Porter became admiral and Stephen C. Rowan became vice-admiral. After the death of the two highest ranking admirals, no further promotions were granted, so that there was no more admiral or vice admiral until 1915, when Congress agreed to appoint one admiral and one vice admiral each for the Atlantic Fleet , the Pacific Fleet and the Asian Fleet .

Even so, there was a senior admiral in the meantime. In 1899, Congress recognized George Dewey's service in the Spanish-American War by authorizing President McKinley to appoint him Admiral of the Navy , which he remained until his death in 1917. To date, Dewey was the only US naval officer with this rank.

In 1944, the Congress approved the rank of Fleet Admiral ( Admiral of the Fleet ). The first and so far only holders of this rank were Ernest J. King , William D. Leahy , Chester W. Nimitz (all in December 1944) and William F. Halsey , who received his fifth star in December 1945.

→ Main article : Badges of rank of the kuk armed forces

Well-known Austrian and Austro-Hungarian admirals were: