A convoy is a group of transport and escort ships assembled to protect against threats at sea. The term convoy , here more precise ship convoy , is often used synonymously for convoy. In military parlance, the term convoy only includes the ships to be protected, while convoy refers to the entire association.

Time of the sailing ships

With the growing sea ​​trade , the need to protect cargo ships from pirates and enemy states grew . From the late 14th century onwards, the Hanseatic League institutionalized convoy shipping as a procedure to protect its ships in those sea areas in which they could not exercise safe control of the sea. The Hanseatic cities of Hamburg and Bremen maintained convoy shipping even after the decline of the Hanseatic League into the 18th century. Another example of the organization of convoys are the Spanish silver fleets in the 16th century. In the 1st Anglo-Dutch War from 1652 to 1654, the focus was on convoys.

The large European trading companies built heavily armed ships that were particularly suitable for overseas trade, so-called East Indiamans , who protected each other in convoys and were additionally secured by warships . Some of these convoys were able to take up combat with naval units, for example in the 1804 naval battle of Pulo Aura, in which a British East India Company convoy consisting of 16 merchant ships , protected only by a brig of the Royal Navy , a French unit of a ship of the line , two frigates and a brig to flee.

After the end of the Napoleonic wars and the emergence of the new peace order of the Congress of Vienna in 1815 and due to the emergence of steam shipping , convoys played a less important role during the rest of the 19th century than in previous centuries. For example, at the beginning of the First World War, the British Admiralty did not consider a previous type of convoy system to be necessary. 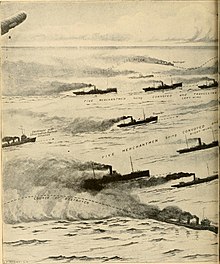 Postcard with a convoy in the First World War

The Imperial Navy introduced the first modern convoy system in the Baltic Sea on April 7, 1916. The reason for this was the sharp rise in the losses of merchant ships in 1915, which transported iron ore, which is essential for German armaments, from Sweden. The increase in losses was due to an intensification of the submarine war on the part of the Tsarist Russian fleet in cooperation with the Royal Navy : In the course of 1915, the British Navy relocated five large E-class submarines to the Baltic Sea during the Baltic fleet was able to put a total of 18 submarines of the modern Bar class into service until the outbreak of the October Revolution . The effectiveness of the convoy system became apparent shortly after its introduction. The losses fell drastically from July 1916, while the German armed forces, organized in commercial flotillas , succeeded in sinking two submarines and damaging others. Participation in the German system was voluntary for the shipping companies, but was widely accepted after a brief period of skepticism. The system was supplemented by agreements with Sweden to be allowed to sail in the coastal waters there. to be able to evade them during attacks.

In both world wars, supplies to the United Kingdom from overseas, and particularly from the United States, were crucial to the war. New threats to shipping came from submarines , aircraft , auxiliary cruisers and sea ​​mines in particular .

"The Germans will win if we don't put an end to these losses ..."

By then, the British had lost - possibly unnecessarily - two million tons of shipping space , as they had refused to order a convoy system because they were supposedly moving too slowly. Before the future US President Herbert Hoover left the United Kingdom to take up a new service, his friend Admiral William Sims asked him to work with Woodrow Wilson to insist on the creation of a convoy system. The Germans sank 800,000 tons per month, far more than the official figures suggest; Allied shipping could have come to a standstill in December 1917.

The convoys then proved to be the most effective method in the First World War to protect merchant ships against submarines (→ Sea War in the First World War ). The convoys were usually guarded by warships; In addition, the merchant ships often carried their own guns. With their help, Germany's opponents succeeded from 1917 onwards to considerably reduce their ship losses from submarines. Against the tactics of the convoy, the German admiral Karl Dönitz developed the pack tactic, which was tried out occasionally during the First World War and which was successful for a long time in the Second World War.

World War II in the Atlantic

Ship convoy WS-12 on the way to Cape Town. In the air a Vought SB2U from the American aircraft carrier USS Ranger on submarine patrol (November 27, 1941)

Convoy routes in the Atlantic, 1941

During World War II , the United Kingdom and the United States created a powerful convoy organization early on . This led large convoys to assembly points such as B. together before Halifax , who crossed the Atlantic together and under escort. It was a great organizational achievement to bring associations of dozens of merchant ships of different types and nationalities together under the convoy commodore to form an association that could act together. A convoy could stretch over an area of ​​many square kilometers.

The escort system consisted of fast combat ships such as sloops , corvettes , frigates and destroyers , which were specially equipped for submarine hunting . The side guards of the convoy protected the flanks and attacked recognized submarines that were fought until the aft guard could take over the fight. This attempted either to sink the submarines or to push them under water until the convoy was too far away for the submarines, which were slow under water. Rescue ships, which were supposed to take over the crews of sunken ships, were also part of the aft protection.

During the Second World War, small aircraft carriers, so-called escort aircraft carriers , began to be used to protect against submarines and bombers . There were also CAM ships ( English : CAM ship = " C atapult A ircraft M erchantman" - in German about: "Katapult-Flugzeug-Handelsschiff") and MAC ships (Merchant Aircraft Carrier) used. In order to be able to turn into the wind at any time for the take-off and landing of their aircraft, the escort carrier drove far in front of the convoy so as not to be hindered in his necessary travel movements by the fixed driving order of the escort. The carrier's aircraft secured a wide area against submarines and, as far as possible, also prevented submarines standing in front of the convoy from sinking into the convoy.

With the increase in the range of the aircraft and the use of radar , land-based bombers in the Atlantic also posed a threat. Convoys around Norway on the way to northern Russia ( northern convoys to Murmansk and Archangelsk ) and in the Mediterranean were also attacked by bombers.

World War II in the Pacific 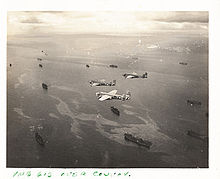 US convoy in the Marshall Islands

The poor anti- submarine doctrine of the Japanese Navy also contributed to the high casualties. Before and during the first years of the war, the submarine hunt and the protection of merchant ships were only of minor importance, and protected convoys did not become the rule until 1943. It was not until the end of 1943 that the Grand Escort Headquarters was set up to coordinate convoy trains and develop a standard doctrine for forming convoys. In April 1944, an escort of convoy headquarters was also set up . It represented a pool of experienced commanders who were to serve as convoy commanders. None of them had any real experience in convoy warfare or anti-submarine defense.

Attacks on merchant shipping in February 1944 resulted in a new composition of the Japanese convoys. That month, over ten percent of the merchant fleet was lost to submarines and air strikes. Among the losses were several transport ships with reinforcements for the Marianas and Carolines . In response, Grand Escort Headquarters increased the standard size of the convoys from five to "large" convoys of ten to twenty ships. This change enabled the Navy to provide more escort ships per convoy and hoped by reducing the number of convoy to make it more difficult for enemy submarines to find targets.

The Japanese Navy continued to protect convoy trains and a. Kaibokan a. One known submarine attack on a Japanese convoy was on the Take Ichi convoy . Japanese submarines also attacked convoys, but they mainly focused on attacks against warships. A well-known example of a Japanese attack is the GP55 convoy . In response to the ongoing Japanese submarine attacks on merchant ships, the Australian Navy ordered that from June 8, 1942, every ship with a displacement of more than 1200 ts and a maximum speed of less than 12 knots should circulate in armed convoy.

After the Second World War, the convoy system was discontinued. With the beginning of the Cold War , the Soviet submarine threat to the connections between North America and Europe was assessed as so great that in May 1950 NATO established a new naval shipping organization based on the experiences of World War II under the name Naval Control of Shipping Organization (NCSOrg) .

After the end of the East-West confrontation, this organization was transformed from a mandatory to a cooperative system, which is designed for voluntary cooperation and is called Naval Co-operation and Guidance for Shipping ( NCAGS ).

During the first Gulf War, the armed forces of escorting US umgeflaggte Kuwaiti oil tankers in the Persian Gulf (see also Operation Earnest Will ).

With the rise of piracy off the Somali coast, a new threat to shipping has arisen since 2002, which has led to the deployment of convoy trains for merchant ships. In addition to various organizations such as NATO and the European Union, a number of individual states take part in the escort operations . The EU is providing escort to ships of the United Nations World Food Program as part of Operation Atalanta . In parallel, the US Navy is offering slower ships for the passage of the International Recommended Transit Corridor in the Gulf of Aden.