The Marianas , also Mariana Islands, are an archipelago in the West Pacific ( Oceania ), which are geographically assigned to the island region of Micronesia .

Geopolitically , the Marianas are divided into the two US American outlying areas of Guam and the Northern Marianas .

The arch of the Mariana Islands extends over a distance of about 800 km from the northernmost island Farallon de Pajaros to the southernmost island Cocos Island near Guam . Most of the islands are of volcanic origin. Some were created by corals . The Mariana Trench east of the islands has the deepest point in the world's oceans with a maximum depth of 11,034 m. Together with the Ogasawara and Izu Islands in the north, they form the system of the Izu-Bonin-Mariana Islands arch .

The most important islands of the Mariana Islands are:

On March 6, 1521, Ferdinand Magellan was the first European to discover the archipelago, formerly known as Ladrones ("Ladrones"), and his sailors called them Islas de Ladrones ("Thieves' Islands" because of thefts by islanders who had come on board). ).

The Spanish colonial rule of the Philippines rested on the connection to and from the east, specifically the Manila galleon route from Acapulco in New Spain ( Mexico ) to Manila. On this route, the islands about 2,000 kilometers east of the Philippine Archipelago are the closest landmass and were soon a natural and common stopover on the long journey across the Pacific to ingest fresh water and food. 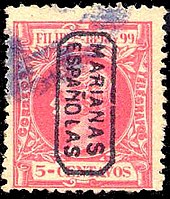 Postage stamp from the Mariana Islands from the late Spanish colonial period, around 1898–99. 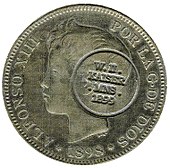 Commemorative coin to the time of the German occupation in 1899.

The Mariana Island of Pagan during the German colonial period, illustration by Rudolf Hellgrewe around 1900 . 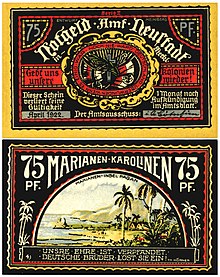 75 Pfennig emergency note from 1922. The text laments the loss of the colonies on the Marianas and the Carolines after the Treaty of Versailles .

But Magellan had little good to say about the islands, he experienced the inhabitants as thieving, even a dinghy was stolen from him, which he recovered in a bloody punitive expedition; in short, he had nothing but trouble there and couldn't even take up fresh supplies. Disgusted, he left the islands after a short stay. His chronicler Antonio Pigafetta wrote: "Since the inhabitants of these islands were very skilled thieves, we gave these islands the name" Ladronen ", thief islands" (quoted from: Fernão de Magalhães. The first circumnavigation , based on contemporary sources by Dr. Hans Plischke , FA Brockhaus, Leipzig 1936).

Spanish war of conquest and hub of the Asian fleet

For the geographical reasons mentioned above, it was obvious for Madrid in the long term to incorporate the archipelago under Spanish rule in order to be able to better organize the sea connection from Manila to Mexico. In 1667, almost 150 years after Magellan's "discovery" of the Philippines, the "Islas de los Ladrones" were officially subordinated to the Spanish crown. In a protracted war of conquest from 1668 to 1696, the archipelago was conquered and proselytized against the bitter resistance of the population. Contemporary sources estimate the population before the war of conquest at up to 100,000 inhabitants, of which only about 5,000 survived. This population collapse is viewed by some historians as genocide , while others, such as B. Jesuit historians , as a result of the diseases introduced. Almost all of the surviving population was forcibly relocated to the island of Guam in order to keep it under direct Spanish control.

The Marianas became the hub of the Spanish Asian fleet with the Manila galleon . On Guam, the necessary infrastructure for supplying the galleons was expanded. For this purpose, a garrison was maintained on the island of Guam, which consisted of around 20 Spanish officers and NCOs, 110 Filipino troops, and a militia. Around 460 men from the population deported to Guam, who were selected by lot, had to serve in the militia. The cost of this garrison in the amount of 20,000 Pesos was financed as an annual real situado from the customs revenue of the Manila galleon collected in Acapulco.

Only the term “thief's islands” was no longer really suitable for a Spanish territory and for a more detailed description of the now subjects of the crown; a new name was needed. In the meantime, King Philip IV reigned in Spain, the islands could not be named after him, the Philippines already existed. His wife was Maria Anna of Austria , Archduchess of Austria, the daughter of Emperor Ferdinand III. , in Spanish she is called "Mariana de Austria". In her honor the Spaniards renamed the archipelago “Islas Marianas”, the name has been kept to this day.

With the end of Spanish colonial rule in South America , the trade in the Manila galleon also ended. The former hub of the lucrative silver trade with China became an insignificant outpost of Spanish East India , which was directly subordinate to Spain after the independence of New Spain. The maintenance costs previously borne by Acapulco had to be borne by Manila. However, the financial means were lacking for the technical renewal of the fleet and garrison. The militia service was retained, but only required a few hours per week. The stationed troops were mainly used as guards for the newly created Spanish penal colony.

Already at the beginning of the Spanish-American War , Spain lost almost its entire Pacific fleet to the technically superior US Asia Squadron in the battle of Manila Bay . The Marianas, who had not yet been informed of the war, were thus helplessly delivered to the US squadron. The Spanish governor of Guam, Juan Marina, surprised by the protected cruiser USS Charleston (C-2) , handed over the understaffed garrison and civil administration to Captain Henry Glass on June 21, 1898 without a fight. Finally, in the Peace of Paris in 1898 , Spain officially ceded Guam to the USA . Even before the peace treaty came into being, Spain sold the rest of the Marianas, together with the remaining Spanish colonies in the South Seas, to the German Empire in the German-Spanish Treaty on February 12, 1899 . From then on they were administered as part of the German New Guinea colony . The Marianas were thus divided between the German Empire and the USA, with the Germans taking over the northern Marianas and the Americans owning the island of Guam, which, with around four-fifths of the total population, was the political and economic center of the Spanish Marianas up until then.

Based on archaeological finds, it is assumed that the Marianas were settled from the Philippines 4,000 years ago. Before the violent proselytizing and colonization, an estimated 100,000 people lived on almost all of the islands. The population called Chamorro by the Spaniards lived matrilinearly from farming near the coast and from extensive fishing. Unlike in colonial times, there was a constant exchange between the islands. Due to the almost complete extinction in the course of the Spanish colonization and the deportation of the few survivors, the Chamorro were denied their traditional way of life, so that their culture was largely destroyed by the colonization.

On the island of Saipan , the Spaniards settled with Carolinians in 1816, who for a long time formed the largest minority of the Marianas. In contrast to the Chamorro, they were able to retain parts of their culture. In the meantime, the Chamorro on the Mariana Islands have become a minority themselves through many waves of immigration and only make up a third of the population. The largest group are Filipinos . (As of 2020)

The four large islands in the south - Guam , Rota , Saipan and Tinian - are inhabited, the islands in the north of the island arc are mostly because of active volcanism , but uninhabited ( Alamagan island since 2009).

Since the most widespread language of the Marianas, Chamorro , does not belong to the Micronesian languages , the culture of the Marianas is sometimes referred to in older literature under the collective term " Melanesian culture".

The rail traffic in the Marianas played only until the end of the Second World War, a role for the transport of sugar cane and military supplies. 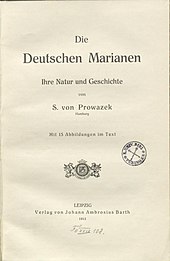