A medical officer is an officer who serves in the medical services of the armed forces .

Medical officers and other medical personnel from various nations, including a (female) German medical officer in air force uniform

A medical officer is in the broadest sense an officer who serves in the medical services of the armed forces . In this broad sense, this also includes officers who are not used as medical specialists , but also officers who, for example, drive or operate vehicles of the medical service or their facilities, protect medical service facilities as part of self- protection or are employed in logistics and personnel planning. A somewhat narrower definition only includes officers who are used as medical specialists. This also includes, for example, officers who do not belong to the medical profession , but who have often learned a medical profession and are active in curative care , for example in nursing , rehabilitation or psychological care for wounded or traumatized soldiers .

Usually, however, only those officers be counted among the medical officers, a license to practice as a doctor , dentist or veterinarian have. Officers with a license to practice medicine are also counted among the medical officers (so-called military pharmacists ). Since it is often a formal legal status in the sense of a soldier's career regulation, this also includes doctors or pharmacists who are only remotely active in their specialist area, but instead are primarily concerned with troop leadership or logistics planning, for example.

Medical officers usually wear the regular uniform of a combatant and, like other officers, are often superiors of other soldiers and are fully integrated into the hierarchy of the armed forces. In some armed forces, such as the Bundeswehr , the rank designations of the licensed doctors and pharmacists differ from those of other officers. In some armed forces, the “regular” ranks are often supplemented by an addition, such as B. (MC) for medical corps ( English for "medical corps "), added. Although medical officers are “regular” soldiers in this regard, medical officers are considered non-combatants if they work as a doctor or pharmacist in one of the medical services facilities . They are then marked by special protection symbols, are under the special protection of the Geneva Conventions and are only armed for self-protection or the protection of their patients and medical facilities .

According to Central Service Regulations 14/5 and Soldiers' Careers Ordinance , medical officers hold special ranks, which are defined in the order of the Federal President on the rank designations and the uniform of the soldiers . According to ZDv 14/5, these ranks can be divided into the rank groups generals , staff officers and captains . These ranks are also referred to as "medical officer ranks" or "medical ranks". In detail, these are the ranks listed in the following table.

Authority to command and positions

Medical officers are on an equal footing with other officers with regard to their superior function and can, regardless of their rank, on the basis of § 4 ("Superiors relationship on the basis of the rank") of the Superiors Ordinance within the limits set there, soldiers of the rank groups of the teams , the NCOs with and without porterage and the lieutenant Give orders.

Medical officers are mainly deployed in facilities and associations of the medical service of the Bundeswehr . Medical officers are mainly used in the medical treatment of patients. For this purpose, they serve in the Bundeswehr hospitals, specialist medical centers, or sometimes directly in the troop as a troop doctor , ship doctor or flight doctor as doctors. Pharmacists are responsible for the replenishment of the medical supplies and technical questions of food monitoring and (hospital) hygiene in the Bundeswehr pharmacies or in a supply and repair center for sanitary materials . Veterinarians deal with the treatment and questions of animal husbandry and animal breeding and often serve in this function in the service dog clinic or in the pack animal center or where laboratory animals are kept. In addition to the curative activity , medical officers are employed in the institutes of the medical service and other departments but also in military medical research and analysis . Of particular interest are studies of epidemics and specific clinical pictures in the countries of deployment , the effects of ABC and conventional weapons, toxicology and related research subjects in pharmacology . In food and drug monitoring , in animal and environmental and health protection , as well as animal disease control , veterinarians and pharmacists in particular also perform public law tasks in the Bundeswehr. Advisory support senior medical officers in the army as a division or brigade doctor commanders in medical issues. Higher-ranking medical officers are employed in the above-mentioned institutions or in staff departments of other offices , command authorities and in the ministry as heads of units , departments and laboratories, senior and chief physicians . Medical officers, like troop officers, are also used in more "classic" commanding functions as unit commanders when they serve as company commander of a medical company or commander of a hospital or medical regiment or a supply and repair center. In these positions , questions of logistics , self-security and troop leadership are in the foreground. According to the decree of December 16, 1960, medical officers of the Bundeswehr may also practice privately in secondary employment , provided that this does not endanger the performance of official duties . A total of 3,150 medical officers serve in the Bundeswehr (as of December 2007), 2,400 of them as doctors, 430 as dentists, 240 as pharmacists and 80 as veterinarians .

The training to become a medical officer takes place in the sense of the Soldiers' Career Ordinance as a medical officer candidate . Initially, officer candidates of most careers complete basic training and further training phases, sometimes in the form of courses, at various training institutions. For medical officers, however, the academic training that takes place at a civil university is also in the foreground . The training to become a medical officer ends with graduation. In most cases, officers ' courses are attended at one of the officers' schools before their studies (sometimes also afterwards) in order to be able to fulfill the role of military superior . Before being appointed lieutenant, an officer examination must be passed at an officers' school. During their studies, medical officers usually only have contact with the "regular" troops during military internships , clinical traineeships or practical study phases. After the license to practice medicine, there is often a (military) advanced training (post-university modular training (PumA), consisting among other things of operational, leadership and language training) in order to "reintegrate" the young medical officers into the troops.

When they are employed as officers, further courses are regularly added to provide officers with the basic knowledge they need to fill a new position at a higher hierarchical level or to adapt to changing technical, social, mission-specific, medical, etc. framework conditions. For doctors, training in emergency medicine is the first priority. For medical officers, further training to become a specialist , specialist veterinarian , specialist dentist or specialist pharmacist is made possible. The staff officer course at the command academy of the Bundeswehr is not necessary for promotion to staff officer . However, particularly efficient medical officers complete this course and / or the general / admiral staff course there , which makes a later use in the top positions of the medical force more likely.

The rank badges for medical officers are essentially the same as for officers . Career badges in the form of a (modified) Aesculapian staff are used to distinguish between the medical officers . In the career badge for doctors, the snake winds in a double twist , for dentists in a single twist around the staff. In the case of veterinarians and pharmacists, the snake twists around a (imaginary or not shown rod); at pharmacists, a pharmacist bowl is also shown below. Medical officer candidates already wear one of these career badges according to their subject.

Armed Forces of the German Empire

Confusing the Nachrangstellung appears the General upper physician (designation in 1934 abolished) to the General doctor. In addition, this should not be confused with the senior general physician rank introduced around 1910/11. 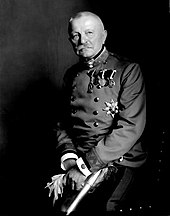 The Austro-Hungarian armed forces also knew the position of a medical officer. For example, Joseph Ritter von Kerzl (1841-1919), the long-time personal physician of Emperor Franz Joseph I , held the rank of Chief Staff Officer . The Josephinum (Vienna) was an important training facility for the medical officers of the Austro-Hungarian armed forces .