The deployment and training center for pack animals 230 ( training / training center TrgTWes 230 ) is a unit for replenishment with pack animals of the mountain hunter brigade 23 with approximately company strength . The unit is stationed in the Hochstaufen barracks in Bad Reichenhall .

With its Haflingers and mules , as means of transport suitable for high mountains , it is the only unit with service animals in the Bundeswehr, along with units with service dogs . The operations and training center is one of the army logistics troops and is able to transport supplies in unfavorable terrain and under difficult weather conditions, especially in the mountains and during special operations. The unit belongs to the German mountain troops and, like the army centers , also serves as a central training and further education facility and for the further development of the Bundeswehr's military pack animals.

Soldiers from Eins- / Ausz TrgTWes 230 and PzGrenBtl 391 supplying the Observation Point Citadel (at 2400 m above sea level) during the pack animal testing of the German army contingent in Kosovo in 2002 with exclusively native pack animals.

In the mountains and difficult terrain, mountain troops are supplied by a train specializing in the mountains using pack animals, in particular mules as a means of transport. The main task of the mountain carrier company is to support the mountain troops through the subsequent, rarely accompanying transport of weapons , ammunition , food and other supplies and the subsequent supply. This task is performed either together with wheeled and tracked vehicles (the Mountain Logistic Battalion 8 is planned for this in the Mountain Hunter Brigade 23) or helicopters , or in bad weather and under extremely unfavorable terrain conditions also by the pack animals alone.

The mission of the mountain animal unit also includes the use of the horses as mounts when exploring, maintaining connections and in scouting teams in rearward areas , less endangered areas or in difficult terrain such as the KFOR mission in Kosovo . Pack animals have also been used in special operations in Afghanistan.

Even in times of high-tech weapon systems, the Bundeswehr's mountain animals are the only way to supply troops in difficult, severely divided terrain in bad weather. The army service regulation HDv 342/300 provides for the use of pack animals in peace missions , but also in peacekeeping, peace enforcement , peace consolidation and humanitarian operations, and therefore also supports special forces in action.

Mules and Haflingers are the only means of transport that are able to cover long distances, silently and inconspicuously, in difficult and heavily cut terrain. The pack animal company therefore also supports special forces such as the special forces command or long-distance scouts in the transport of heavy infantry weapons, ammunition and food to the scene of action, as well as in the return of the wounded and freed hostages to a base in the rough terrain with pack animals, less often with riding horses. Due to the structure, however, these are to be secured by security elements in the enemy-penetrated area. For extended training, members of the Special Forces Command at the Operation and Training Center for Mountain Animals 230 were trained in riding .

In difficult terrain, scouting forces can be supported by pack animals with the transport of equipment and supplies and these can also be brought into enemy territory up to a supply point with pack animals to the rear. There, the loads are to be taken over by the special forces and from there to be transported the last distance themselves. The whereabouts of the pack animals in the disposal area in order to take over transports or to leave immediately depends on the location .

The Bundeswehr logistics school, on the other hand, provides general course-related training for the next generation of leaders in the area of ​​supplies . For the veterinary field, the operations and training center is dependent on cooperation with the training and research facilities of the Central Medical Service .

The Bundeswehr introduced in the Gebirgstruppe 1958 in Mittenwald the rock supporting animal Company 8 for the 1st Mountain Division on. A disconnected train lay in Bad Reichenhall from January 1960 . This train became the nucleus of the later deployment and training center for mountain animals 230. The mountain animal comapnie 8 was on July 20, 1960 in the mountain supply battalion 8 on.

Due to the experience made in Kosovo , where a large part of the mountain animal company 230 is deployed every six months to maintain peace with mounted site surveillance and patrols (see the Swiss patrol riders ), as well as because of the political demand to be able to carry out two foreign missions simultaneously in the future , the Expansion of the structure of the pack animal component considered.

Nevertheless, the abolition of the center is discussed again and again. There is, however, a need for the troops, as was shown by the local rental of Afghan donkeys by several combat units of the Kunduz Task Force in Afghanistan in 2010 and 2011. Special forces have long recognized the advantages of using animals for riding or for transporting water and equipment in the multinational environment as well as in this country. In Bad Reichenhall there is now an annual riding and transport course lasting several weeks for members of the special forces command . In view of the increasing mechanization and automation of the military battlefield, this development may seem unconventional and strange, but the advantages of using mules and horses in difficult terrain and in extreme temperatures, in mine-contaminated areas or areas at risk of booby-traps, as well as during reconnaissance missions or in urban operations, are evident and, depending on the location and area of ​​application, are the only alternative to mechanized transport systems.

The operations and training center is managed in the structure of a company and consists of a company command group and three pack animal trains . The company commander holds the rank of senior field veterinarian . He and his deputy are medical officers and licensed veterinarians . These take over the medical care of the riding and pack animals. Some soldiers are farriers and horse landlords with additional training as horse carers and horse management masters. 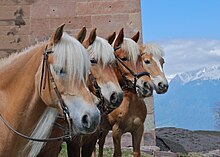 The three pack animal trains each have 24 pack animals of eight Haflingers as riding and pack animals and 16  mules (mules). The total load capacity is around two and a half t per train plus own requirements. The company has another six pack animals in the veterinary troop, which are kept ready as a reserve. The animals can be used with riding saddles or pack saddles as well as with single-axle carts . As transport for the pack animals are special truck  5t  tmilgl used to transport construction. The containers have a stable room to accommodate four pack animals. Mulis and Haflingers are decommissioned after around 15 years and are then between 20 and 25 years old.