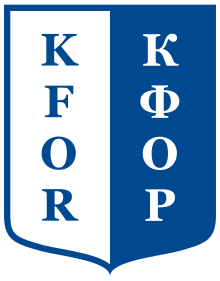 The Kosovo Force , shortly KFOR (English Kosovo Force ), the 1999 after the end of the Kosovo war established multinational military formation under the leadership of NATO . It is incumbent upon it to ensure a safe environment for the return of refugees in accordance with Resolution 1244 adopted by the United Nations Security Council in June 1999 . Thus, the first KFOR task was to monitor the withdrawal of Yugoslav troops and the demilitarization of Kosovo. The headquarters are in the Kosovar capital Pristina .

In Kosovo, KFOR works closely with missions of the United Nations ( UNMIK ) and the European Union ( EULEX Kosovo ). In April 2009 UNMIK handed over essential tasks in the development of the police and judiciary to EULEX Kosovo.

With the adoption of UN Resolution 1244 by the Security Council on June 12, 1999, NATO - as the leading organization for the implementation of the peace support operation in Kosovo - received the mandate:

In 2011, KFOR was restructured and comprised two multinational battle groups based in Peja and Ferizaj as well as joint regional detachments. The Joint Regional Detachments were in charge of the liaison monitoring teams. Through this restructuring, a bridge was built from traditional military forces to military forces firmly anchored in the population. This created the “feeling of the pulse” within the population as a further management element for the KFOR commander (COM KFOR).

The current organization (as of September 2019) is as follows:

The following elements are assigned to the headquarters in Pristina:

The KFOR Multinational Specialized Unit (MSU) is based in Pristina and is part of the COM KFOR force. It consists entirely of Italian carabinieri .

The MSU is a military unit made up of police forces with military status. It provides COM KFOR with the ability to implement security measures, including criminal investigation, crowd and riot (CRC), and information gathering and evaluation. The MSU can also provide assistance to local police forces on a variety of police advice and support as needed, including: law enforcement, the fight against organized crime and terrorism, war crimes investigation, crime prevention and public safety.

The MSU is commanded by an Italian Carabinieri officer who advises COM KFOR on all civil police matters.

Regional Command East (RC-E) is a NATO command based at Camp Bondsteel near Ferizaj in southeast Kosovo. This camp is the main base of the US Army under the KFOR command in Kosovo.

The RC-E conducts peacebuilding operations in Kosovo to ensure a safe environment and unrestricted freedom of movement.

The unit is commanded by a US officer and consists of US troops as well as troops from Poland, Romania and Turkey.

The Regional Command West (RC-W) is a NATO command headquarters at Camp Villaggio Italia near Pec in western Kosovo. This camp is the main base of the Italian troops under the KFOR command in Kosovo.

The RC-W conducts peacebuilding operations in Kosovo in order to contribute to a safe environment and freedom of movement. The RC-W also carries out the surveillance in the Decane monastery as first responder.

The unit is commanded by an Italian officer and consists of troops from Italy, Austria, Moldova and Slovenia.

The Joint Logistics Support Group (JLSG) is based in Camp Film City Pristina.

The JLSG's task is to provide the KFOR armed forces with logistical support throughout the operational area as well as military technical support in order to ensure a safe environment and freedom of movement. The functions of JLSG include general provision of pioneering technical means, transport and repair, defusing of explosive substances, fuel supply, provision and transport.

The unit is commanded by an Austrian officer and consists of troops from 16 different troop-contributing states.

The KFOR Tactical Reserve Battalion (KTRBN) is stationed in Novo Selo, in Camp Marshal de Lattre de Tassigny (CMLT) and is directly under the tactical control of COM KFOR. KTRBN's range of services includes a wide range of security measures, for example the protection of people with a special security status, protection of goods with a special security status, roadside checks, escorting people / vehicles, monitoring of rooms, education, first aid measures for the population and other military capabilities. KTRBN is specially trained in Crowd and Riot Control (CRC) operations. The KTRBN can be used anywhere in Kosovo. The battalion consists of Hungarian troops.

The Headquarters Support Group (HSG) is based in Camp Film City Pristina. The HSG has the task of protecting Camp Film City / HQ KFOR from internal and external threats. The unit also provides support for the KFOR headquarters at Camp Film City and has the following facilities: Camp Marechal de Lattre de Tassigny, Camp Nothing Hill and the Pristina military airport. The unit is commanded by an Irish officer and is made up of troops and civilian personnel from several troop-contributing countries.

The states marked with * are not NATO members.

During the Kosovo War in 1999, US General Wesley Clark, as Supreme Allied Commander Europe (SACEUR), was in command of NATO troops. Until the troop reduction in 2010, KFOR was led by a lieutenant general who usually belongs to one of the Lead Nations, who also headed one of the five multinational brigades. Due to the troop reduction, COM KFOR has been occupied by a major general since 2010.

In addition to KFOR - the largest mission in terms of numbers - the following missions are currently active in Kosovo:

Wikinews: KFOR  - on the news