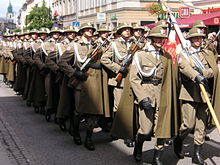 Polish mountain troops at a parade in Warsaw

The mountain troops belong to the ground forces that are specially trained and equipped for combat in difficult terrain (in the mountains ) and under unfavorable climatic conditions.

Special features are the ability to dismantle weapons and equipment into payloads, the appropriate clothing and equipment for the soldiers ( mountain boots , safety equipment for the march in the mountains, ski equipment , snowshoes , etc.) as well as some alpine skills. The mountain troops can also be deployed in difficult low mountain ranges and in flat areas, in pathless and confusing, heavily forested and built-up areas.

In most countries, the mountain troops are not a type of troop, but are made up of several types of troops such as artillery and army reconnaissance troops . However, their characteristic core is formed by light infantrymen , known in Germany and Austria as mountain troops .

In Germany, Austria and Poland the mountain troops wear the edelweiss as a badge. 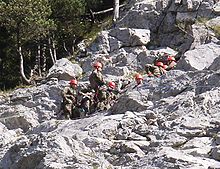 Mountain troopers of the Bundeswehr during a climbing exercise in Mittenwald

General principles of use

The mountain troops are particularly suitable for use

Their training and equipment enable them to work in mountainous terrain and in extreme weather conditions, either on foot or on skis .

The Mountaineer lead it as the Jägertruppe the fight in all types of combat and special combat operations , primarily in heavily overcast and transected terrain against enemy infantry and their vehicles. They are particularly suitable for fighting in narrow areas and waters , to be used in hunting combat and to keep spaces open for subsequent forces.

Fight in the high mountains 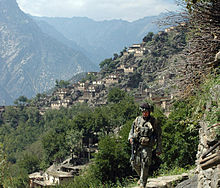 Soldier of the U.S. 10th Mountain Division on patrol in Aranas, Afghanistan

The high mountains make extraordinary demands on the mountain troops. In Central Europe, for example, roads usually only lead into the area of ​​alpine farming, beyond that one can only use crates. All loads, their own weapons and equipment, food and especially ammunition must then be carried by the soldiers. The same applies to all supplies. There are no differences between teams and superiors. Transporting the wounded is particularly difficult under such conditions. The troops are still supported by the use of pack animals . If the weather and the battle situation allow the use of helicopters , they take over the task. During the Second World War, the mountain troops in the Caucasus were able to make their first experiences with it.

The greatest challenges are the terrain and the weather. In alpine heights, the weather situation can change almost every quarter of an hour and you have to reckon with strong temperature fluctuations (of up to 45 ° C temperature difference in summer) between day and night. There is little cover above the tree line, and fortifications are often only possible with the help of blasting. In the rock, the enemy weapon effect is intensified by ricochets and by artillery fire by rock fragments. Rock falls and avalanches in winter often cause great sacrifices among the soldiers.

The physical demands on the mountain troops are enormous. At high altitudes (from approx. 2000 m above sea level) this factor is intensified by the thin air and the associated lack of oxygen.

The mountain troops in different states

The first troops specially trained and equipped for mountain warfare were set up in Italy in 1872, and numerous armies followed suit.