The alpine edelweiss ( Leontopodium nivale ) is a species of the genus Leontopodium (edelweiss) within the sunflower family (Asteraceae). It is one of the most famous and symbolic alpine flowers.

The alpine edelweiss is a wintering green, perennial herbaceous plant that reaches heights of 5 to over 20 centimeters. The above-ground parts of the plant are woolly, white-felt, with the narrow, lanceolate, approximately 5 cm long leaves that are particularly hairy on the underside. The leaves stand together in a basal rosette .

The flowering period extends from July to September. Five to fifteen glossy white bracts form a multi-pointed star and surround the actual inflorescence . The two to twelve similar cup-shaped partial inflorescences each contain 60 to 80 white-yellow tubular flowers. The very narrow tubular flowers on the edge are female. They are also called thread-like flowers. Further inwards are larger male tubular flowers. Since the functionless stylus is still there, the flowers can appear hermaphroditic.

There are achenes formed. 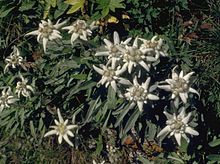 Detail of the inflorescence with white bracts, which are often mistaken for the actual flower 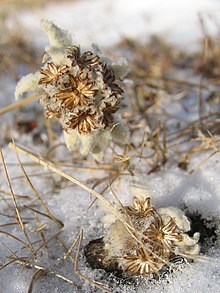 The alpine edelweiss is a hemicryptophyte .

The achenes are spread out as an umbrella flyer; when wet, they can also stick to animals.

The apparent flower is an inflorescence, just a false flower ( Pseudanthium ). The viewing function is created by the thick, white felted bracts. The actual flowers sit in the hundreds, organized in individual flower heads, in the middle of the star and together with the bracts form a pollination-biological unit (superpseudanthium).

The dazzling white shimmer on the bracts is created by the fact that thousands of small air bubbles reflect the incident light on the often tangled, frizzy hair. This serves as a signal for nectar-seeking insects, as protection against evaporation and as protection against heat loss. The working group led by the Belgian physicist Jean-Pol Vigneron from the University of Notre-Dame de la Paix in Namur has found that the hair itself consists of parallel fibers with a diameter of 0.18  micrometers , which is in the order of magnitude of the wavelength of UV radiation and leads to their absorption. However, the rest of the light is let through so that the plant can photosynthesize .

Pollinators are mainly flies as well as hymenoptera , butterflies and beetles . The pseudo-bloom lasts into winter.

Since the 19th century, many botany enthusiasts found joy in enriching nature with plants that they brought back from their travels (so-called anointing ). These plants also include edelweiss, which was planted on rocky sites in some low mountain ranges and can still be found there occasionally.

From the perspective of invasion biology and nature conservation , this is assessed critically. According to § 40 of the Federal Nature Conservation Act , all such anointings are subject to approval.

Edelweiss stick on the Höfats in the Allgäu Alps

Contrary to popular belief, the alpine edelweiss is not a steep rock plant. It is true that it also inhabits ledges, but according to its original origin from high steppe areas, it is far more likely to be found in alpine lawns, especially since it is no longer picked in all easily accessible places thanks to greater awareness of nature conservation. Such practice had made it survive in harder-to-reach places.

The alpine edelweiss can thus be found - in addition to the occurrence on limestone cliffs  - again on stony meadows and lawns, and - more rarely - on alpine meadows , is unevenly distributed and prefers rocky limestone surroundings at altitudes between 1800 and 3000 meters. It shows a preference for siliceous sites, including on lime, where it indicates chert tubers. The very abundant occurrences z. B. in the Allgäu on the Höfats are localized on silica-containing chert limestone .

The alpine edelweiss is a weak character species of the Seslerio-Caricetum sempervirentis.

The alpine edelweiss "immigrated" into the Alps " after the last ice age cold period from the high steppes of Central Asia". At that time the Alps were free of vegetation and resembling steppes , because the ice sheet that had covered most of the mountains had only just melted. "Relatives of the Alpine edelweiss occur in the high steppe areas of Central Asia and East Asia.

The alpine edelweiss is considered to be endangered in Germany. a. Entering and driving on the locations, in the past mainly the partly commercial picking. The stock at the Höfats in the Allgäu Alps can be cited as an example of successful protection of a deposit . There the remaining deposits of the alpine edelweiss, which were already protected at that time and which were found there, fell sharply during the inflation period due to excessive picking, and were guarded by the Allgäu Mountain Rescue from 1935 to 2007 during the heyday. For this purpose she had set up a tent and later a bivouac box . Today the populations there have recovered and the nature conservation awareness of the mountain hikers has increased so that guarding is no longer necessary.

In Switzerland, the alpine edelweiss is under nature protection in all cantons and may not be picked, even if it is no longer considered endangered in Switzerland today.

In Austria, edelweiss was placed under nature protection as early as 1886 , many decades before all other rare and endangered plant species. With the advent of tourism in the Alps, it quickly became a coveted and durable souvenir due to its numerous myths. In Austria, the plant is only on the Red List in Carinthia (potentially endangered here because of its attractiveness). In Austria, however, edelweiss is still completely protected in the federal states of Salzburg, Carinthia, Vorarlberg, Upper Austria and Tyrol, in Styria it is partially and in Lower Austria classified as endangered to pick.

The common alpine edelweiss Leontopodium alpinum Cass. was changed to the subspecies Leontopodium nivale subsp. in 2003 by Werner Greuter . alpinum (Cass.) Greuter recombined. As a result, the taxon was incorporated into the species Leontopodium nivale , which as a total species is referred to in German as "Alpen-Edelweiß". The species name Leontopodium alpinum , which dates back to 1822 ( Alexandre Henri Gabriel de Cassini in Cuvier Dict. Sci. Nat. , 1822, 25, p. 474), was different from the older species name Gnaphalium nivale Tenores in 1811 ( Fl. Napol . 1, xlviii, 1811) should not be considered valid, since according to the general opinion both clans belong to one and the same species. So only the recombination remained, so that at least the name alpinum could be kept for the subspecies . 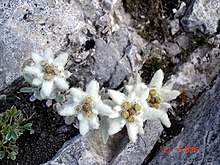 The alpine edelweiss is divided into two subspecies:

The botanical generic name Leontopodium is derived from the Greek words leon for lion and podion for little feet, this refers to the characteristic thick, felted, white hair and the shape of the bracts. The specific epithet nivale refers to the alpine level (from Latin nivalis 'snowy').

Other common names are Wollblume, Bauchwehbleamerl, Irlweiß, Almsterndl, Federweiß, rarely also Silberstern and Wülblume (in Switzerland). In Romansh [fourth Swiss national language, spoken and written in addition to German and Italian in the canton of Graubünden] is Leontopodium nivale Alvatern (alv = white, etern = eternal): this reflects the peculiarity that the white inflorescences persist into winter.

In addition to varieties bred from alpine edelweiss, nurseries also have species and hybrids from the Himalayas that, if cultivated correctly , can retain their white color in the lowlands. However, in places that are too nutritious and shady, they run the risk of becoming less compact and greening. The alpine edelweiss was traditionally used as a medicinal herb and boiled with milk and honey was used against stomach ache. This usage is also reflected in the Bavarian popular name "Bauchwehbleaml" (bellywehblümchen). It was also used by the mountain dwellers as a durable flower ("eternal flower") in dry bouquets. However, the flower was not very well known before the middle of the 19th century.

An instant product is sold as an isotonic , anti-inflammatory drink with edelweiss extract from the Swiss town of Delsberg . Extracts from the leaves of the alpine edelweiss are also used in cosmetics as a moisturizer and UV protection for anti-aging products and sun creams due to their high antioxidant content . Edelweiss is therefore cultivated agriculturally in the Swiss Alps and is also available as an additive in beer, tea and liqueur.

Edelweiss as a symbol

The passion for edelweiss, which had previously been neglected, began in the middle of the 19th century. The focus is on an incident from 1856 when the Austrian Emperor Franz Joseph I and his wife Sissi went on a mountain hike to the Pasterzen Glacier on the Grossglockner . There the emperor picked his wife an edelweiss from the steep rock with the words “The first in my life that I picked myself”. The affection for edelweiss was a common feature of the famous couple and this well-known story raised people's attention to this alpine plant.

The plant became known as a symbol of the Austrian Empress Elisabeth. A portrait by the painter Franz Xaver Winterhalter painted in 1865 shows Empress Elisabeth with nine artificial edelweiss stars braided in her hair. The jewelery made of precious metal and diamonds was designed in the years after 1850 by the then court and chamber jeweler Alexander Emanuel Köchert . In the ku k monarchy, with the increasing veneration of the empress Sissi, more and more romantic myths have grown up around the alpine plant . Only daring climbers manage to pick an edelweiss. It embodies values ​​such as love, courage, loyalty and community. According to such myths, the edelweiss is said to have arisen from tears which the Ice Maiden shed over the infidelity of her beloved hunter. Before her death jump, she conjured tears in the form of edelweiss stars on the rocks there. Anyone who reaches for the edelweiss in the rock should from now on perish.

With the rise of mountain tourism at the end of the 19th century, the edelweiss became the badge and symbol of alpinists and mountaineers. In order to prevent the extinction of the often picked symbolic species, it was placed under nature protection early on. The edelweiss was soon adopted as a symbol in the logo of numerous alpine clubs and associations. In the Austro-Hungarian Army in particular , the symbolic relationship between defiant, frugal and resilient alpine plants or the required perseverance, agility and cutting edge of the alpine troops was recognized and emphasized and often promoted by badges and designations.

Face of the 1 shilling coin

Rank loop of the fire brigades in Austria with edelweiss as a star, around 1990

In earlier times the plant was used for love spells and as a symbol for tokens of love and daring boldness. Edelweiss served as a badge of opposition youth groups of Edelweiss Pirates in the era of National Socialism . A song called Edelweiß from the film The Sound of Music (1965) became very popular, especially overseas. The film is based on the musical of the same name by Richard Rodgers and Oscar Hammerstein . While the song is generally little known in Austria, it is often seen by tourists as the unofficial national anthem of Austria or elsewhere by tourists as an old folk song.

Occasionally there are abnormally large flower stars (maximum 6 to 12 centimeters in diameter), which appear in the legendary world as magical "edelweiss kings".

In the comic Asterix with the Swiss , an alpine edelweiss has to be found as part of a healing potion for a poisoned quaestor .