Compositae is a redirect to this article. For further meanings of the singular form, see compound word (disambiguation).

The daisy family (botanically Asteraceae or Compositae ), also called daisy family , aster family or cap flower family, are the largest family of the order of the aster-like (Asterales) within the flowering plants (Magnoliopsida). About 10% of the species of flowering plants belong to the Asteraceae. The German name composites and the botanical name Compositae ( Latin for 'compound') are derived from the shape of the inflorescence .

The Asteraceae family contains around 1,600 to 1,700 genera with around 24,000 species and is represented worldwide on all continents, except for Antarctica , in all climatic zones . In Europe it is one of the most species-rich plant families.

There are mostly one to two years or perennial herbaceous plant species, but there are also woody species: subshrubs and shrubs , rarely vines or trees . There are monocarpic and polycarpic species. There are species in almost every type of habitat , only a few species grow as real epiphytes or aquatic plants. In some taxa , the plants contain milky sap .

The arrangement of the leaves is mostly alternate, rarely opposite or whorled; they are often combined into a basal rosette. The stalked to sessile leaves rarely have simple, often pinnate to pinnate leaf blades. They are herbaceous to leathery, sometimes they are transformed into thorns . The leaf margin is smooth, wavy, lobed, serrate, serrated or toothed. There are usually no stipules present.

The cup-shaped inflorescences are typical of this family . The bracts surround the flower heads and form the involucre ("calyx"). The conically elongated or flattened inflorescence axis , the flower base, the flower bed (Clinanthium, Phoranthium), of the individual flowers, which together form the flower head (Calathium, Anthodium), is glabrous and smooth or hairy. The bottom of the cup can have seated, scale-shaped bracts , the so-called chaff leaves (Palea).

A flower head contains one to a thousand flowers, depending on the species. The flowers of a flower head develop and bloom from the outside to the inside (centripetal).

The hermaphroditic or unisexual flowers are usually five-fold. The sepals are partially or completely reduced, in many taxa they are transformed into a characteristic fringe of hair or, less often, a membranous border; this flying machine for the fruit is called pappus . The petals are fused to form a tube. There is only one circle with three to five fertile stamens . The stamens are short. The anthers (anthers) are fused into a tube and form a typical feature of the family. Two carpels have become an under constant ovary grown. The stylus , with always two stylus branches, push through the anthers tube and push the pollen out of the tube with purging hairs that are located on the outside or at the tip of the stylus. Only then will the scar become fertile.

Achenes with pappus from Centaurea cyanus

There are two basic flower shapes in the family: radially symmetrical tubular flowers (disc flowers) and zygomorphic ray flowers (ray flowers). Depending on the subfamily, both flower forms are present together or just one of them.

The flower formula is or .

The fruit is usually a special form of a nut, the achene , usually with a pappus that can be in the form of scales, bristles or hair.

Pollen grains of the sunflower ( Helianthus annuus ). Most of the Asteraceae are pollinated by insects; the prickly surface, which gives them support, helps.

The flower heads look like individual flowers and also function as a whole to attract pollinators from an ecological point of view . These are flowers in which many, small individual flowers are grouped together, so they form a pseudanthium . At the edge of the basket flowers arranged florets often reinforce the impression that it is in the inflorescence is a single bloom.

The pollination is mainly by insects or by the wind.

The unit of spread ( diaspore ) is the achene . The achenes are spread either by the wind through the flying hair or by animals. The involucral leaves form z. B. with the great burdock ( Arctium lappa ) hooks at the tip, which get caught in the fur of mammals or in the clothing of humans, only to fall off again later at another point. This is a special form of zoochory called epizoochory .

Many species are rich in essential oils that are found in very characteristic glandular scales. Inulin is often formed as a reserve substance .

Individual species of the Asteraceae family and especially their cultivated forms are used in a variety of ways. Here is an incomplete list with the plant part that is mainly used:

As a salad or vegetable:

As a medicinal and aromatic plant:

For the extraction of vegetable oils:

A great abundance of species and their varieties are used as ornamental plants in all parts of the world. They are planted in parks and gardens or serve as cut and dried flowers.

Asteraceae fossil finds are mostly pollen deposits and fruits. There are only a few pollen records from the Eocene , but from the Oligocene and Miocene , the pollen of the Asteraceae is common. The importance of the family in the earth's ecosystems has increased from the Middle Oligocene to the present day.

Recently, pollen fossil finds and molecular genetic studies (of ndhF and rbcL genes) have been used to uncover the origin of the Asteraceae. Bremer and Gustafsson 1997 or Kim et al. 2005 concluded that the origin is at least 38 million years ago, probably in the Middle Eocene (42 to 47 million years ago).

The current distribution of the closest related families Goodeniaceae and Calyceraceae and the basal and isolated subfamily Barnadesioideae suggest that the origin of the family was on Gondwana in what is now South America , Antarctica and Australia . 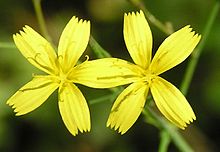 Subfamily Cichorioideae : Mauerlattich ( Mycelis muralis ), the five corolla lobes of the yellow, zygomorphic ray-flowers and the two-part stigmas of the pistil are nice to see

The Asteraceae family contains around 1600 to 1700 genera with around 24,000 species . According to phylogenetic knowledge, twelve subfamilies were introduced, which contain a total of about 43 tribes .

Pedigree according to Panero & Funk 2008: