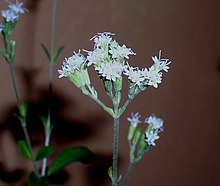 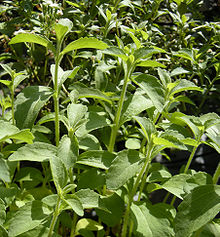 Stevia rebaudiana (syn. Eupatorium rebaudianum ), also Süßkraut , sweetleaf , honey cress or Stevia called, is a plant from the genus of stevia ( Stevia ) in the family of Compositae (Asteraceae). The plant has beenusedas a sweetener stevia for centuries because of its strong sweetening power. In November 2011, thesteviol glycosides, which mainly consist of stevioside , wereformallyapprovedas a food additiveby the European Commission . Previously, in April 2010, the European Food Safety Authority published a positive assessment of the safety of steviol glycosides, which wasprecededby a joint application by Morita Kagaku Kogyo Co. (Japan), Cargill Incorporated (USA) and the European Stevia Association (EUSTAS, Spain) was.

Stevia rebaudiana is a perennial, heat-loving, herbaceous plant that comes from the subtropics, is not frost-hardy and is therefore usually cultivated as an annual plant . It grows 70 to 100 cm high and has 2 to 3 cm long leaves . The leaves are opposite. Stevia is a short day plant . It blooms white, the flower heads are grouped into umbels and are terminal. The wind-pollinated Stevia rebaudiana is self-sterile . The germination rate of the seeds is only around 13 to 15 percent even with fresh seeds. Stevia rebaudiana only germinates from seeds that are not older than half a year.

The plant is originally from Paraguay in South America . Stevia rebaudiana has been used as a sweetener and medicine by the indigenous peoples of Brazil and Paraguay for centuries . The Guaraní Indians call it ka'a he'ẽ (sweet cabbage) and use it to sweeten their mate . Europeans learned about Stevia rebaudiana in the 16th century when the Spanish conquistadors reported that the South American people used the leaves of a plant to sweeten herbal tea. The plant was first scientifically examined around 1888 by the botanist Moisés Santiago Bertoni , who emigrated from Ticino to Paraguay and who also wrote the first description in 1899.

Natural stevia can be found in the highlands of the border area between Brazil and Paraguay, for example in the Amambay department . Without the effects of frost, the plant can be used in Paraguay for four to six years. Elsewhere, stevia cultures have to be re-established every year due to the lack of frost resistance. In order to extend the growing season, the plants are grown from seeds or cuttings in the greenhouse. The harvest takes place between September and October, but no later than the first early frost. In cultivation trials with stevia, yields of 1000 kg / ha were achieved, from which 60 kg of stevioside could be extracted. With a stand density of 14 plants per square meter in the foil tunnel, leaf yields of over 5 t / ha can be achieved with medium growth and 7.6 t / ha with fertilization.

Stevia is a plant species that has been known for centuries and can also be described as a natural sweetener. Its ingredients, often also called steviosides , are mainly used in Asia as a sugar substitute for sweetening teas and foods. Korea produced stevia for the Japanese market as early as 1973, where the sweetener from the stevia plant now makes up 40% of the sugar substitute market.

In comparison to beet sugar, stevia leaves are 30 times sweeter, and the sweetening substance contained in them, stevioside, is even 150 to 300 times sweeter in its pure form. The leaf contains only one 300th of the physiological calorific value of the equivalent amount of household sugar. The advantage of stevia over the sweetener aspartame is that it is also sufficiently temperature stable and can therefore also be used for baking and cooking. The leaves can be stored for years when dry.

Approval as food in Europe

After a UN expert committee confirmed that sweeteners made from stevia were harmless to health, the first individual applications for the use of sweeteners made from stevia were approved in Switzerland. In Switzerland, stevia has been approved for individual products such as chocolate or iced tea. In addition, stevia (liquid, tabs, powder) is now also available in pharmacies and drug stores in Switzerland, and has even been available in some supermarkets since March 2010.

In the EU, the sweetener obtained from stevia leaves is approved as a food additive from December 2nd, 2011 . France had previously been the first EU state to issue a preliminary approval for sweeteners from the Stevia rebaudiana plant by decree . The EU approval provides for maximum stevioside levels for various foods and beverages . Before the approval, there was already a brisk internet trade in stevia preparations, although these were used to circumvent the ban or criminal liability, e.g. B. (because of their simultaneous anti-caries effect) were declared as dental care products.

More than 100 active plant ingredients were found in the leaves of Stevia rebaudiana . These belong mainly to the groups of terpenes and flavonoids . The ingredients responsible for the sweetness of stevia were documented in 1931. These are eight previously unknown glycosides . The stevioside content in the fresh plant is between 3.7 and 4.8%. When dried, the leaves contain an average of 7% stevioside, with the values ​​varying between 2 and 22% depending on the year and cultivation method. In addition to stevioside, dried leaves also contain rebaudioside A , which is more water-soluble and around 30% sweeter, with 1.5 to 4 and sometimes up to 10%. It also contains 1 to 2% rebaudioside C and 0.2 to 0.7% dulcoside .

From the Guaraní and from Brazilian and Paraguayan traditions it is said that stevia can also be used as a medicine. Stevia is said to have a strengthening effect on the heart, and also to be effective against obesity, high blood pressure and heartburn . Studies of the effect of stevia extracts on sterility in the rat did not show consistent results. The first indications come from the 1960s. The effect of stevia on fertility is therefore not scientifically proven and is discussed controversially.

In studies, antihypertensive, antihypertensive, antimicrobial and vasodilatory properties have been observed. No negative effects were observed in Japan and South America. Stevia is also suitable for diabetics and does not increase blood sugar levels. It has a plaque-inhibiting effect and is therefore preventative against tooth decay and therefore tooth-friendly. No addiction was observed.

The actual sweetener, the stevioside , was not found to have any mutagenic or genotoxic effects. The mutagenicity of the breakdown product of stevioside, steviol , is controversial. In some studies, teratogenic and mutagenic effects in hamsters and rats have been described, as well as mutagenicity in vitro . The studies available to the WHO on the effects of steviol in vivo have not produced any indications of mutagenic effects in humans. In animal experiments on rats, hamsters and mice, acute and subchronic toxicity was shown which, although low, raises doubts about the safety of use. Further studies on rats showed significant impairment of male fertility. Critics of these studies argue that the fertility loss in rats is related to extremely high doses of fresh stevia leaves of more than half their body weight per day. Studies in Brazil and Japan have shown that consumption of less than 38.5 mg stevioside per kg body weight and day is not expected to cause toxicity.