Vincent Klink (born January 29, 1949 in Gießen ) is a German chef , author , editor and publisher of culinary literature and television chef .

Vincent Klink was born in Gießen in 1949 as the son of the official veterinarian Alfred Klink and grew up in Schwäbisch Gmünd with an older brother and four sisters. He spent his school days in a monastery boarding school of the boys' secondary school Heilig Kreuz of the Sacred Heart Missionaries in Donauwörth . After completing secondary school and a six-month internship in a butcher's shop, Klink did an apprenticeship with master chef Walter Haas (1922–1996) ( Waidhof ) in Inzlingen near Lörrach (1966–1969). Haas was considered a pioneer of nouvelle cuisine and often accompanied the German foreign minister as "ambassador of German cuisine" on visits abroad.

He then signed up for two years in the German Armed Forces, where he was employed as a cook and tank commander. From 1971 to 1972 he worked in Rudolf Katzenberger's Adler in Rastatt and from 1972 to 1974 in the Munich restaurant Humplmayr , which, according to him, was once “the most feudal bar for classic gourmands” in Germany. Klink's father, Haas and Katzenberger were members of the Confrérie de la Chaîne des Rôtisseurs , an international community of chefs and gourmets.

After taking the master craftsman's examination , Klink started his own business in 1974 at the age of 25 and opened his first restaurant with his wife Elisabeth, the Postillion in Schwäbisch Gmünd. The inn belonged to his father who had previously leased it. He made his son an offer to take it over, otherwise it would have been sold. If Klink had the choice again, he would not have to face the associated hardships again. The Postillion already had a Michelin star in 1978 . 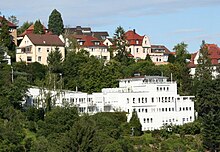 Vincent Klink has been running the Wielandshöhe restaurant in Stuttgart - Degerloch since 1991 , with a total of ten cooks, eight employees for service and other staff. A large part of his kitchen workforce are now (2015) career changers and most of the academics. In 1998 this kitchen was also awarded a Michelin star, which it lost in 2001 and which was awarded again in 2002 after a year without a star. Klink attaches great importance to the ecological cultivation of vegetables and animal welfare . He supports regional, organic farmers and gardeners whom he has personally visited beforehand.

Its gastronomic offer is described as "classic-modern cuisine with Swabian and Mediterranean influences"; he himself describes it as a “kitchen in the same climate zone” . In 2018, the restaurant critic Jakob Strobel y Serra described Klink's kitchen with only a few “concessions to the high-end kitchen” as “perfected home-style cooking with complete renunciation of refinement or alienation” [...] “which is so sinfully seductive despite its simplicity”. [...] "Vincent Klink is not about experimenting, it's about preserving."

From 1986 to 1992 Vincent Klink was the editor and author of the magazine Rübe , a magazine for culinary literature in Haffmans Verlag . Then he devoted himself to Cotta's Culinary Almanac , which he edited for ten years at Klett-Cotta . The poet and spokesman for the Enlightenment, Christoph Martin Wieland , gave its name to Klink's Restaurant Wielandshöhe . Together with the writer Wiglaf Droste , Klink published the quarterly magazine " Chief Own Hearth " from 1999 to 2013 .

From 2004 to 2007 Klink published the journal culinaire every six months , which initially appeared under the title Campus Culinaire . The cultural studies articles in the magazine are devoted to the topic of eating and drinking. At the end of 2009, Klink published his autobiography on childhood and adolescence ( Sitting Küchenbull. Peppered memories of a cook ). He himself also became the subject of literature, namely as a fictional character or prison cook in the crime satire Der Mullah von Bullerbü by Wiglaf Droste and Gerhard Henschel . Klink published the culinary travel guide A belly walks through Paris (2015) and a homage to the first modern gourmet and founder of gastronomy criticism Alexandre Balthazar Laurent Grimod de la Reynière (2016).

Appearances in films and on television

Klink became known to a larger audience through the television cooking programs ARD-Buffet and Kochkunst (1997–2015). For the three-part series EpochenKochen (2014), Klink cooked historical dishes from Romans, knights and citizens at original locations . In February 2015, the SWR TV series got off to a really good start! Klink & Nett with the restaurant owner and cook Susanne Nett , in which old Palatinate dishes are reinterpreted.

He had one of his first film appearances in the crook comedy c (r) ook by Pepe Danquart , in which he played a cook. In 2002 he had a guest role as a cooking judge in the final sequence of the crime scene crime thriller Alibi for Amelie . Klink played the chairman of a gourmet club in a supporting role in the 2009 television film It's on my Tongue .

Klink is a jazz lover and musician. In his spare time he used to play the flute . In October 2005 he performed together with the trumpeter Till Brönner . Since 2008 he has also played bass flugelhorn and trumpet. In 2008 he performed with the mezzo-soprano Helene Schneiderman in a matinee to the music of Rossini on the island of Mainau .

Since 2009 Klink has been playing with his friend jazz pianist Patrick Bebelaar . You have been a guest at major festivals such as Lit.Cologne and the Baden-Württemberg Literature Days . The joint CD Stupor Mundi (dml-records) was awarded the German Record Critics' Prize in 2015.

In November 2006, Klink took part in an Internet initiative against green genetic engineering , which was also supported by environmental, nature conservation and church associations as well as consumer advocates. He also runs a beekeeping, just like his grandfather .

In 2017, Klink had to pay additional taxes of 16,000 euros because he had not specified in his employment contracts that no staff meals would be served on either of the rest days.

Vincent Klink has been married since 1974. He has two children, a son from a previous relationship and a daughter with his wife Elisabeth who works with her mother for the service of their Wielandshöhe restaurant .