The Michelin Guide [ ɡid miʃ.lɛ̃ ] is a hotel and travel guide that appears annually in different country versions. The French edition is published by Michelin Editions des Voyages in Paris . The well-known Red Michelin is a guide for restaurants and hotels , the Green Michelin is a general tourist guide.

A list of starred restaurants can be found in the list of the Michelin Guide restaurants in German-speaking countries .

The Michelin Guide was published for the first time in 1900 with a circulation of 35,000 copies and initially limited to France . Designed by the tourism department of the tire manufacturer Michelin , it was intended as a workshop guide for the fewer than 3,000 drivers who were in France at the time. The initiators André and Édouard Michelin found a niche in the market and gave tips on how to deal with cars and tires as well as the names of workshops, battery charging stations and petrol depots.

In 1904 Michelin published the first foreign edition with the volume Belgium . In 1910 the first German-language Guide Michelin appeared for Germany and Switzerland. In 1920 the guide was charged, it cost seven francs . Hotel and restaurant recommendations appeared for the first time in 1923. From 1926 onwards, the Michelin Guide gained even greater importance for gastronomy because it was the first to award individual stars . In the years that followed, the travel publisher refined its rating and, from 1931, awarded two and three stars for particularly outstanding kitchen services. Initially, this multi-star system only applied to the French province; From 1933 Michelin expanded it to Paris . In 1936 the definitions of the stars that are still valid today were introduced.

Michelin plaque at the restaurant L'Auberge du Pont de Collonges of Paul Bocuse , which received three stars from 1965 to 2019 every year

As in World War I , no Michelin Guide appeared in World War II . Nevertheless, the book made a career in the service of the Allies . While the British and American troops formed in England in the spring of 1944 to cross to France, the Allied headquarters feared that it would be difficult for them to find their way around after landing, as signposts and signage could have been largely destroyed or dismantled. After meticulous research and supported by the Michelin management, the Allies decided to reissue the last pre-war volume of the Michelin Guide and to use its numerous city maps as a source of information. For this purpose, the Michelin Guide France of 1939 was reprinted in Washington and given to the officers of the United States Army . The reprint can be recognized by the note "For official use only" on the book cover . With the Michelin Guide in their luggage, the American troops landed in Normandy on June 6, 1944 ( D-Day ).

In 1994 a Swiss edition was added. From 2005 to 2009 there was also an edition for Austria, which was then discontinued because sales had not developed as expected. In the last year of publication, 49 establishments in Austria were rated with one or two stars, there was no restaurant with three stars. Since then, Michelin stars in Austria have only been awarded in the cities of Vienna and Salzburg that are covered by the “Guide Michelin - Main Cities of Europe”. In addition, restaurants in Kleinwalsertal , which belongs to the Austrian state of Vorarlberg , are also included in the German edition .

The Michelin Guide has since given up its original restriction to Europe. Restaurant guides are now also available for selected travel destinations in the USA (Chicago, New York City and the greater San Francisco area or, from summer 2019, California ), Japan (e.g. Tokyo and Kyoto ), China (e.g. Hong Kong and Macau ) and, among others, for the Cities of Seoul , Taipei and Singapore published.

Since 2010 there has been a website of its own, on which restaurants can be searched for, rated and commented on. This was set in 2017 and again in cooperation with the British online restaurant reservation service Bookatable by the service Bookatable by Michelin replaced. In addition, the restaurant and hotel reviews from the Michelin Guide have also been integrated into the ViaMichelin online route planner , which is operated by another subsidiary of the Michelin Group.

The red book cover, which has developed into the typical identification mark for this gastronomy guide, was not introduced for all country editions until 1950. The design remained unchanged until 1999, but with the anniversary edition 2000, both the cover design and the explanatory designation were varied almost annually. The cover of the respective annual edition is identical for all countries - except for the language.

Since January 2004 Travel House Media GmbH , Munich, a company of the Ganske publishing group , has been selling the country editions for Germany, Switzerland and France as well as all other country versions in the German-speaking area. The publisher of the German and Swiss country editions is Michelin Reiseverlag in Karlsruhe .

Gwendal Poullenec has been the director of all international editions since September 2018. The French editorial team was headed by the German Juliane Caspar until the beginning of 2017 , who had been editor-in-chief for the country editions for Germany, Switzerland and Austria until the end of 2008. Her successor for the France edition was Gilbert Garin, and Ralf Flinkenflügel for the German-speaking countries at the beginning of 2009. The 43-year-old chef and hotel specialist worked in hotels and top-class restaurants before he joined Michelin in 1992 as restaurant inspector and became deputy editor-in-chief in 2000.

According to the company, the Michelin Guide in Europe employs a total of 85 critics for the twelve European restaurant and hotel guides, who can be used across borders. Evaluation criteria are the consistent quality of the ingredients and their freshness, their professional preparation, the harmony of the taste combination as well as the innovation and uniqueness of the dishes, which is reflected in creativity and personal touch.

On average, the 3800 restaurants and 5000 hotels are visited every 18 months, with a star rating more frequently. Differentiated recommendations are made for more than 1500 restaurants, whereby the test reports are limited to a few sentences (unlike, for example, the competitor Gault-Millau , in which detailed restaurant reviews are published).

In 2005 the Michelin Guide came under fire because the Ostend Queen restaurant in Brussels was positively rated in the Benelux guide , but it was not yet open when the guide was published. The 50,000 already printed copies of the edition were then destroyed.

In the Guide Michelin Germany 2019 published in February 2019, the restaurant "Alte Vogtei" in Köngen was listed with one star by Lars Volbrecht , although it was finally closed in summer 2018. In a statement, the editors stated that the operators withheld this information several times and only spoke of a temporary closure for renovation work. 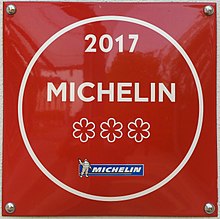 In the German edition of the guide, the meaning of the Michelin stars is described as follows:

The symbol used worldwide for the stars is more reminiscent of a flower with six petals than a star. In France, the word macaron is often used colloquially as a name for the Michelin star, alongside the word étoile . This synonym is now occasionally used in German-speaking countries.

Below the star spectrum, the “Bib Gourmand” award is given for carefully prepared and at the same time inexpensive meals. Restaurants that have neither received stars nor the “Bib Gourmand” rating, but which the editors believe are still recommendable, are marked with a plate symbol (Assiette).

The restaurant's kitchen performance is recognized in each case. There is a separate rating for the ambience and the service, each represented by up to five knife and fork cutlery placed crosswise. So it is quite possible that a very simply furnished self-service restaurant (just a cutlery symbol) will receive one or more stars thanks to its outstanding kitchen. In 2017, for example, a street kitchen in Bangkok was awarded a Michelin star.

Since 2020, the topic of sustainability has been awarded a Green Star ; this concerns the origin and transport routes of the products as well as the type of cultivation, animal husbandry or processing. The testers highlight restaurants that follow a sustainable concept. For Germany, the pictogram will initially appear on the website and in the smartphone app. In Germany 18 restaurants received this award.

→ Main article : List of restaurants awarded by the Michelin Guide in German-speaking countries

In the 2020 edition of the Michelin Guide for Germany (published in March 2020), ten restaurants are rated with three stars, 43 with two stars and 255 with one star (one of the 255 single-star restaurants is in Kleinwalsertal and thus in Vorarlberg / Austria). 372 addresses were given the title “Bib Gourmand”.

The highest rating of three stars was first awarded in Germany in 1980 in the Michelin Guide, to the Munich restaurant Aubergine under the direction of the Austrian Eckart Witzigmann . Witzigmann had previously also been the chef who received two stars (Michelin Guide 1975) for the first time in Germany (for the Munich restaurant Tantris ). The first chef with German nationality to receive the three-star rating was Herbert Schönberner in 1982 in the Goldener Pflug restaurant in Cologne-Merheim (which has since been converted into a rustic brewery ). As the only restaurant in Germany, the “Adler” restaurant in the “Schwarzwald Hotel Adler” in Hauser has consistently been awarded a star since it was first opened in 1966.

In Switzerland there are three restaurants with three stars, 22 with two stars and 97 with one star (status: Guide Michelin Switzerland 2020 , published in February 2020).

Other important German-speaking competitors of Michelin in the field of restaurant and hotel guides are the publications, which are also published annually, such as:

In addition, leaderboards such as The World's 50 Best Restaurants are published regularly .

A typical characteristic of the touristic Green Guide (Guide Vert) is their green cover and the narrow format. They were published for the first time in 1926 by André Michelin , who bundled the directions he had previously sent individually to motorists. The target group are individual tourists interested in culture, for whom the sights of a region are described in condensed form in the Green Guide and - similar to the Baedeker system - classified by highlighting.

The Green Guide is currently being published in German for the following regions: