Brew Pub is a redirect to this article. See also: Gasthaus Brauerei . 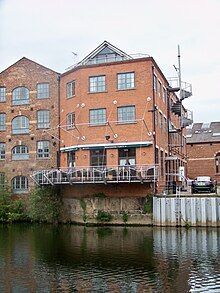 A brewery out of date, even brewery , has traditionally been the combination of a brewery with an affiliated restaurant , where mainly the brewery's own beer is served. Because of their ambience, breweries can be classified as adventure gastronomy . In addition to the beer, they also offer food.

In addition to breweries with brewers together with the connected gastronomy there are dining options, traditionally located Brauhaus call, though the brewery has long been outsourced or no longer exists. Other restaurants that were not part of a brewery in the first place, be Brauhaus called when viewed from a brewery to its parent company were collected and figurehead. Nowadays, gastronomy without mentioning spatial reference to a brewery in many cities Brauhaus . Only the decoration of your facility is characterized by large copper-shining brew kettles or other utensils of the traditional brewing trade.

Historically, there were urban and court breweries in many places from the Middle Ages to the beginning of the 20th century. Citizens or court employees could have their own beer brewed in these under the guidance of a brewer . The use of the breweries was regulated by ordinances and regulations and these breweries were mostly equipped with a malt kiln .

With the craft beer trend , small commercial breweries have emerged in the USA since the 1980s. With the corresponding alignment as a pub brewery , they are classified as brewpubs by the brewery association. On the other hand, the name Regional Craft Breweries is chosen. This trend is also beginning to develop in Germany with microbreweries offering special varieties.

A special form is the restaurant brewery or restaurant brewery . They are mostly larger inns with appropriate equipment that want to promote the attractiveness of the location and the location or in tourist areas with their own range of beers - regionally or for a limited time - to promote sales. A pub brewery operates an active brewery, whereas a purely historical reference to a former brewery is sufficient for the brewery. A brewery can, but doesn't have to be, a brewpub.

The term Bräustüberl (also Bräustübl or Bräustüble ) refers to a pub connected to the brewery in Bavaria , Baden-Württemberg and parts of Austria , in which the self-brewed beer is served. It is very often owned by the brewery in question. The combination of brewery and pub is known in other parts of Germany as a brewery.

The focus of the gastronomic activity is on serving home-brewed beer. Traditional Bavarian cuisine is usually on offer and the furnishings are rustic. The name “Bräustüberl” is often carried on by former brewery restaurants whose affiliated brewery no longer exists.

"Pannhaus" or Ripuarian "Pannes" is the common name for a brewery in parts of the Rhineland . Here brewing beer was only allowed against a fee to the landlord in the Pannhaus. The name comes from the wort kettle, which is also called beer pan, beer kettle, brew kettle. Pannhäuser were also used as a court, as was the case for hereditary courts and taverns . The Kinzweiler Pannhaus was built in 1435. Further Pannhäuser in the Aachen area are in Dorff and Eilendorf .

A facility that is still often found in the traditional Cologne brewery, the Bräues , is the counter- bar , a counter-like construction in which the innkeepers monitor the catering operations. Accordingly, instead of a waiter , the Köbes usually works in breweries in Cologne, Düsseldorf or Krefeld . This profession can be traced back to the medieval brewery servant, who also served beer.