Taferne, tavern (from Latin taberna : hut / shop / (show) -bude / inn, then also taberna publica ) or tavern or tavern are old names for a restaurant . Various place names are derived from this, such as Tafern in Bavaria . Tafers in the Swiss canton of Friborg is traced back to the Latin-Romance tabernas , which is likely to have its origin in Latin ad tabernas ("at the inn"). The origin of the place name in the case of Tawern in Rhineland-Palatinate is archaeologically proven . Tabernae (plural) was also the name of the Roman settlement from which Rheinzabern arose .

The landlord of a Taferne or Tafernwirtschaft, called Taferner or Tafernwirt, held the right to drink in earlier times . This right, roughly comparable to today's restaurant license, included various privileges. It was awarded by the sovereign. 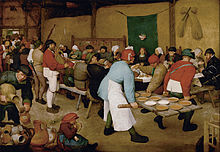 The peasant wedding , painting by P. Brueghel the Elder Ä.

According to this, the landlord of a tavern, a so-called “perfect economy”, not only had the public tapping right , the right to host and host guests, and the stables for foreigners (the supply and sheltering of the train and riding animals ), but he was also allowed to dine in engagement (Häftlwein), weddings , chair festivals , baptismal align and other festive feasts -. The landlord was allowed to serve beer, wine and brandy. Legal transactions used to be drunk with wine. The wine goblet on the guild sign still reminds of this today . For Tafernrecht included the right to brew beer , the focal law and justice back, so the right to create an oven and bake bread.

A tavern had to accommodate traveling journeyman craftsmen for money or handicrafts in return, so they had a social obligation. In addition, the funeral feast was held in the Taferne in the event of death and the estate negotiations were held. If there was no office building, court hearings also took place there (see Inheritance Court ). The Taferne was the communal center in secular affairs for the residents of the village.

A landlord without the right to drink was only a tap host.

In southern Germany, this name is still used for an inn, although the meaning varies regionally, from the modest inn, pub to the stately inn with hotel or guesthouse . Both the spelling “Tafernwirtschaft” and “Tavernwirtschaft” are used. In Switzerland and Austria, on the other hand, the spelling with “v”, modeled on the Italian “taverna”, is preferred. The replacement of the “v” by “f” is due to the Middle High German phonology , where [v] was not a phoneme of its own , but only an allophone of / f / (cf. the very similar case “Tafel”, mhd. “Tavel ( e) ", ahd." tavala "," tabul (a) "from Latin" tabula ", from which Italian" tavola ").