Freiburg ( abbreviation FR ; Swiss German Frybùrg , French Friborg , Italian Friburgo , Rhaeto-Romanic Friburg ? / I , Franco-Provencal le Tyinton dè Friboua ? / I ) is a canton in western Switzerland . He belongs to both the Francophone Romandie and the German-speaking Switzerland on. About two thirds of the population speak French and almost one third German , which means that Friborg, along with the cantons of Bern, Valais and Graubünden, is one of the officially multilingual cantons. The main town is the city of the same name Freiburg (Friborg) . 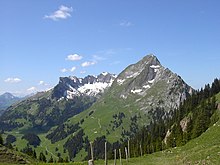 With 1670.8 square kilometers, the canton of Friborg is the eighth largest canton in Switzerland. Topographically , Freiburg can be divided into two larger areas: the northern and western parts belong to the Swiss Plateau , the southeast to the Swiss Pre-Alps (see the main article Freiburg Pre-Alps ).

The highest point is the Vanil Noir at 2389  m . It is located in the south of the canton in the Gruyère district , on the border with the canton of Vaud . The lowest point is at 430  m , on Lake Neuchâtel (Lac de Neuchâtel) .

The coat of arms of the canton of Friborg shows a shield divided by black and silver. This coat of arms originated from the banner of the city of Freiburg when it was released from the sovereignty of Savoy in 1477. At that time, the Savoy crosses on the city gates were replaced by a representation that showed a double shield, divided in black and white, overlaid by the imperial coat of arms. The banner is shown for the first time in 1410 in the Freiburg hand festival. A second coat of arms was created in the 17th century and was used in parallel. In blue it showed three pinnacle towers, sloping down to the left, crowned by a black eagle. This coat of arms originated from the Freiburg city seal and was combined with the old coat of arms in a four-part shield. When the modern canton of Friborg was established in 1803, the coat of arms was separated. Since then, the canton has had the old shield divided by black and silver, the city the blue coat of arms with the tin towers. The canton colors were initially white and black. From 1500 black and blue came into use. It was not until 1831 that the canton's colors were set back to white and black.

The canton of Friborg is an officially bilingual canton, the official languages are French and German . The majority of the population is French-speaking, German is mainly spoken in the north and northeast of the canton. In the Sense District and in the parish Gurmels is in everyday life Senslerdeutsch , in the lake district  - a former commons domination majority - of Bern and Friborg Bern German , spoken the dialect of Jaun in the Gruyère district resembles that of the Bernese Oberland .

In 2011, the residents of the canton were asked about their main language, after which they were able to specify several main languages. Up to three main languages ​​per person were taken into account.

What is striking about the above result is that English (no official or national language of a canton or Switzerland) has a higher proportion than Italian.

Denominations in the 19th century

Friborg is a Roman Catholic canton, although it is surrounded by the majority Protestant cantons of Vaud and Bern. Only in the north-west of the canton, in the lake district, is the majority of the population traditionally Protestant, as the area was a common rule of Bern and Friborg until 1798. Today around 70 percent of the canton's population is Roman Catholic and 15 percent Protestant. The Catholics belong to the Catholic Ecclesiastical Body of the Canton of Friborg ( French Corporation ecclésiastique catholique du canton de Friborg ) and religiously to the diocese of Lausanne, Geneva and Friborg . The Reformed are united in the Evangelical Reformed Church of the Canton of Friborg . 3 percent belong to a different Christian denomination, the rest have a different religion, are not denominational or did not provide any information in the census .

A new cantonal constitution was adopted in 2004, replacing the Basic Law dating from 1856 and revised forty times since then.

See also : List of cantonal referendums in the Canton of Friborg

Necessarily a referendum ( mandatory referendum ) the partial or total revision subject to the cantonal constitution and decrees of the Great Council, which will have a new net output result that exceeds 1% of the total expenditure of the last approved by the Grand Council of State Accounts.

6000 citizens who are entitled to vote and vote can apply for a partial or total revision of the canton's constitution and for the enactment, amendment or repeal of a law by means of a popular initiative . Popular initiatives are to be submitted to the referendum after deliberation in the Grand Council.

300 voters can submit a motion to the Grand Council ( Volksmotion ), which is to be treated like a motion by one of its members.

The cantonal parliament , the Grand Council or Grand Conseil, has had 110 seats since the new constitution came into force. A legislative term lasts five years. The elections are carried out on a proportional basis.

See also : List of Councilors of State of the Canton of Friborg

The cantonal government , the Council of State or Conseil d'Etat, consists of seven members. These are appointed every five years by the people in a majority vote.

See also : List of State Chancellors of the Canton of Friborg

The courts of justice precede the first instance as the arbitration authority in civil matters .

The administrative jurisdiction is exercised by the cantonal court, unless the law says no other authority has jurisdiction.

Administrative and disciplinary supervision of the judiciary is exercised by the Judicial Council . One representative each of the State Council, the Grand Council, the courts of first and second instance, the Bar Association, the University and the Public Prosecutor's Office, as well as two other persons, have a seat on this body.

The city of Freiburg

→ Main article : Municipalities of the canton of Friborg

The canton comprises a total of 136 political municipalities (as of January 2017).

The most populous political communities with more than 5,000 inhabitants as of December 31, 2018 are listed below:

→ Main article : Districts of the Canton of Friborg 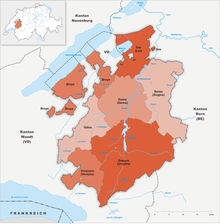 Districts of the canton of Friborg

The canton is divided into seven districts:

1(French-speaking with the only German-speaking municipality Jaun )

The administration of a district is called Oberamt, the head of which is Oberamtmann . Following the French model, each district bears the name of a body of water ("lake" stands for Lake Murten ).

The people of Freiburg seem to be so enthusiastic about singing that there is one “organized” singer for every 35 residents in the canton. Church choirs and secular choirs , mixed or not; Choirs with young and less young members, with or without professional ambitions: The Freiburg Choir Association comprises around 7,200 singers in 234 groups; In addition, there are short-lived formations for certain projects and informal ensembles outside any club structure.

This unusual density can be explained by an age-old tradition that is firmly anchored in regional history. Although the choir movement developed in all Catholic cantons, it found particularly fertile soil in Friborg - in a rural society that was firmly led by the clergy. The choir also developed outside of the religious environment, sometimes as a reaction to it. However, Abbé Joseph Bovet (1879–1951) managed to unite all voices, and his charisma determined the choral life of the entire region for a long time. In the 20th century, the repertoire and the catchment areas expanded, so that the tradition typical of a parish culture, especially in and with the village, in the shadow of the church tower and in the rhythm of local life, faded a little.

→ Main article : History of the Canton of Friborg