The title of this article is ambiguous. See also: Köbes (spirits) or Köbis . 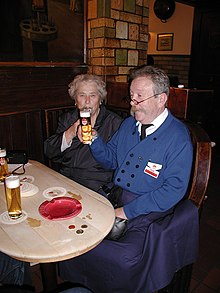 Köbes in the Cologne brewery early after work (2010)

A waiter who serves beer in breweries in Cologne , Bonn , Düsseldorf or Krefeld has been known as Köbes [ køːbəs ] since around the 19th century . Traditionally he always wears a blue linen apron with a leather wallet.

"Köbes" is the Cologne form of Jakob and is also represented in other dialects in the Rhineland, but is occasionally also used with the connotation "stubborn, angular or square person".

Participants in the Cologne congress held in March 1987 as a pilgrimage destination and meeting point for the pilgrims who sat together in the Brauhaus Sion after the end of the conference developed a theory that had been circulating as a legend and Cologne story for decades. The origin of the term can be found in the pilgrimage to the grave of St. James in Santiago de Compostela, Spain . Returning or passing pilgrims had so much to tell about their trip in the inns that they were finally employed by the hosts. This interpretation was included in the relevant literature in 2003 by the non-fiction authors Franz Mathar and Karl-Heinz Schrörs. Due to other sources, this derivation is neither geographically nor temporally sustainable; more likely is an origin from the connotation of the word or from a specific person.

The Köbes and its way of serving are part of the typical Rhenish brewery culture. When a beer glass is empty, the Köbes places a new glass without an order, unless the guest puts a beer mat on the glass or signals that he wants to pay. The often rough nature of the Köbesse is attributed to the brewery servants, who were not trained in visitor-friendly gastronomy and who also had to serve in the taproom:

“Everything was different in Cologne. [...] You don't order a Kölsch in a brewery, you get it. Nor is the Köbes a waiter, but a brewery assistant whose pride precludes carrying beer to the table. Provided that Cologne residents stick to the rules, which is seldom the case, they do so in anticipation of the associated exception, one of which says that, in the end, Köbesse carry beer to the table because they are entrepreneurs and therefore not waiters. [...] You have to believe in a Köbes like in Providence or the Archangel Gabriel. Then everything will be fine."

The counterpart to the Köbes is the Zappes , the tap waiter who pours the beer from the barrel to the Köbes or occasionally directly to guests. The function of the zap can be carried out alternately by the Köbessen. Since Köbesse, like other catering employees, live to a not inconsiderable part from tips , they often share the permanent zappes with their income.

The Köbes used to be an apprentice in a brewery. During the day he helped with brewing, in the evening he served in the taproom. While his job there was limited to filling the beer glasses, he was also referred to as "Zappjung" (tap boy).

Today there are also occasional women who serve in typical Köbes clothing and are sometimes referred to as Köbine.

Traditional Köbesse can still be found today in:

The Köbes is the associative namesake for a large number of terms. In Cologne and the surrounding area, a few dozen inns are called “Zum Köbes” or similar, as well as at least one carnival society. In addition, the house band of the Cologne Stunksitzung is called Köbes Underground . Köbes is also the name of a Cologne herb bitters .

The Institute for German Language and Literature II of the Philosophical Faculty of the University of Cologne publishes the "Cologne Contributions to Language Didactics" under the abbreviation KöBeS.