This article deals with the pilgrim as a person making a pilgrimage; for other meanings of the same name, see pilgrims (disambiguation) . For the story of Tolstoy see The Pilgrims . 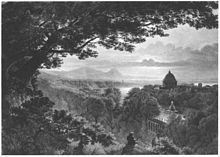 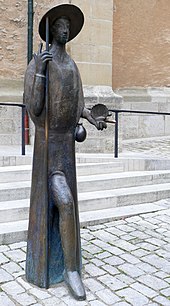 Pilgrim figure in front of the St. Jakobskirche in Rothenburg ob der Tauber

Mantle and staff of a Santiago pilgrim 1571

Pilgrim , also outdated pilgrim ("stranger"), comes from the Latin peregrinus (or peregrinari , "to be in a foreign country"). An individual used to be called a pilgrim's man or woman . In church Latin , Pelegrinus refers to a person who moves abroad for reasons of faith, usually undertaking a pilgrimage to a place of pilgrimage , on foot or using a means of transport.

The occasion of a pilgrimage can be an imposed penance , an effort to gain indulgence , the fulfillment of a vow , a specific cause, spiritual immersion, or the giving of gratitude. The destination is a place considered sacred, such as a pilgrimage church , a temple , a tree sanctuary, etc .; the pilgrimage was and is closely connected with the veneration of relics . In secularized societies, pilgrimage is also practiced as a form of hiking or the word pilgrimage is used in a figurative sense, e.g. B. “Art lovers make a pilgrimage to documenta ”.

More about the etymology

Literally, the pilgrim is someone who, in Latin “per agrum” , that means “over land”, comes from beyond the Ager Romanus , whereby ager does not mean a cultivated field, but the land belonging to the civitas . In this respect, “stranger” is an appropriate translation of the term.

Derived from the term “pilgrim”, the term “Pülcher”, which is derogatory in Austrian colloquial language, means “crook”, “tramp” or “cheater”. The etymological explanation given is that some vagabonds , dodgers , and fraudsters falsely pretended to be pilgrims in rest stops and moved on without paying the bill or the accommodation allowance.

Places of pilgrimage in antiquity

In early times were, among others, certain caves as sacred places, one of the most famous shrines in the Greek world was the Temple of Artemis , but the Apollon - Oracle of Delphi was visited frequently.

One of the most important places of pilgrimage in the world has been Jerusalem since the construction of the first Israelite Temple until today , which became the central shrine of the Jews. Today the city all three monotheistic's world religions sacred: the Jews as well as Christians because of death and resurrection of Jesus Christ , the Muslims visit - except their Hajj pilgrimage named after Mecca and Medina - preferably the Dome of the Rock in Jerusalem. 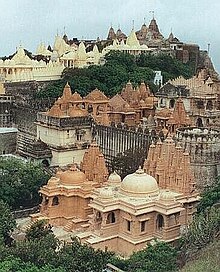 The pilgrimage also plays an important role in Buddhism (cf. Kanischka reliquary and bimaran reliquary ) - for example, as early as the 3rd century BC. A reliquary cult handed down to us, which included both relics of Buddha and the outstanding monks ( arhats ). Later on, Chinese pilgrims such as Faxian (around 400), Songyun (around 520), and Xuanzang (around 630) brought Buddhism to China from their travels through northern India. It is unclear whether Padmasambhava , the semi-mythical founder of Buddhism in Tibet , undertook a similar pilgrimage. Even today, many believers make pilgrimages (mostly in organized group tours) to the four holy sites of Lumbini , Bodhgaya , Sarnath and Kushinagara in Nepal and northern India.

Also the Hinduism has numerous sacred sites; The seven most sacred places are Ayodhya (birthplace of the god Rama ), Dvaraka (capital of the god Krishna ), Haridwar (source plateau of the Ganges ), Kanchipuram (Great Temple of Shiva ), Mathura (birthplace of Krishna) as well as Ujjain and Varanasi . In Ujjain, Haridwar, Nashik and especially at the confluence of the Ganges and Yamuna at Prayagraj , the pilgrimage festival of the Kumbh Mela takes place.

Although the religion of Jainism has no cult of relics , the Jainas also make a pilgrimage naked ( Digambaras ) or in white robes ( Shvetambaras ) in large numbers to their mainly mountain-based sanctuaries (e.g. Mount Abu , Ranakpur , Palitana , Girnar , Shravanabelagola , Parasnath et al.).

Christian pilgrims in late antiquity and the Middle Ages

The spread of Christianity and the building of churches in Jerusalem, Bethlehem and other places in the Holy Land under Emperor Constantine offered Christian travelers new goals to strengthen their faith. The earliest surviving evidence of this is the Itinerarium Burdigalenes , a Latin list of stations recorded in 333 by a traveler from Bordeaux and the report about 50 years later about a trip by Aetheria or Egeria, who came from northern Spain or southern France, to the Holy Land. On site, the travelers' destinations were the places mentioned in the Old and New Testaments , but also in non-Canonical literature , as well as monks and dignitaries who were perceived as exemplary Christians, and later, according to a legend, the cross of Christ identified by Constantine's mother Helena .

Soon women like the noble Roman widow Paula with her daughter Eustochium , who belonged to the circle around Hieronymus , as well as Melania the elder and her granddaughter Melania the younger settled in the Holy Land. Rome then acquired a similarly great importance as the burial place of the apostles Peter and Paul . From the 9th century onwards, Santiago de Compostela was added, which became a leader in the Middle Ages mainly because of its excellent infrastructure with a wide-ranging network of hostels managed by monasteries . Many participants in the crusades to the Holy Land also saw themselves as (armed) pilgrims.

Together with other reformers such as Zwingli and Calvin , Martin Luther also turned against the overwhelming pilgrimage of his time , associated with superstition and indulgences . Even Thomas a Kempis had in his following Christ noted critically: Who pilgrimage lot is rarely holy. After Norway to Protestantism assumed was there, the pilgrims in 1537 even under the death penalty asked.

Pilgrims of the modern age 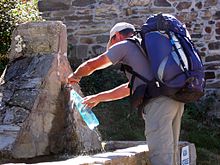 Modern pilgrims on the Spanish Way of St. James 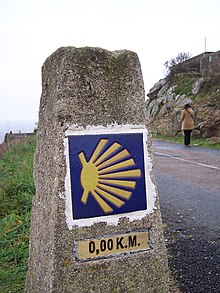 Path marking on a pilgrimage route, here a stylized scallop shell in Spain

Example of a pilgrim pass, a Spanish Credencial del Peregrino with numerous stamps

In contrast to the Protestants, the Catholic Church held fast to the custom of pilgrimages to shrines and promoted them. Ignatius of Loyola , for example, describes his pilgrimage to Jerusalem and Rome in his pilgrimage .

The Pilgrim Fathers were a group of Puritan dissidents from England who sailed to America to establish a colony where they could freely live their faith.

In the last two centuries, Marian shrines such as Lourdes and Fátima have been added to the old pilgrimage destinations . The Camino de Santiago has increasingly been rediscovered in recent decades . In addition to these, there are countless other places of pilgrimage . Occasionally, religiously motivated visitors to places that are not recognized as places of pilgrimage , such as Marpingen , Heroldsbach or Međugorje , are referred to as pilgrims.

Today's pilgrimage is also the subject of empirical research.