The Fridericianum in Kassel during documenta 13 (2012)

The documenta is the world's most important series of exhibitions for contemporary art . It takes place every five years (originally every four years) and lasts 100 days each time; it is therefore also called the Museum of 100 Days . The first documenta was organized in 1955 and was initiated by Arnold Bode . The Documenta is located in Kassel .

“... the documenta has repeatedly shaken the art world, whether in poor post-war times thirsting for art, in rebellious years of revolt, in the carefree epoch of the late 20th century or the change of the century marked by globalization. The documenta story is a story of defeats, doubts, scandals and, at the same time, renewal, knowledge, and artistic productive power. But it has always been a success story ... "

The name of the exhibition is an artificial word. The name carries the claim, especially of the first documenta from 1955, to be a documentation about modern art, which was not accessible to the Germans during the time of National Socialism. It was rumored from Arnold Bode's circle that the name was played by the fact that the Latin word documentum contained the words docere , teach, and mens , spirit - and thus reflected the aim and aspiration of the documenta.

The name comes from Arnold Bode's environment; who the exact author is can no longer be precisely proven today. Arnold Bode himself clearly claimed the authorship of the word documenta: "[19] 50 I invented the name" . The word documenta is a typical creation of the 1950s. In lower case - then more modern - and with the appended "a" (Arnold Bode: "Let's put an 'a' on it, that sounded very good ..." ) it is reminiscent of other word creations of that time, for example the construction fair Constructa (from 1951) in Hanover.

There is no fixed plural formation for the made-up word. Both the plural form "documenten" and word combinations such as "documenta exhibitions" are common. Bode himself and other exhibition directors at the documenta used both (Arnold Bode: “The Museum Fridericianum is ideal between the documentas as a club…” or Manfred Schneckenburger: “The individual documents took place in the following years” ).

Until today, the name of the exhibition is usually written in lower case. Often “documenta” is also abbreviated as “d” , followed by the respective number (for example “d 12” ). Based on the duration of the exhibition, the "documenta" is also called the "Museum of 100 Days". Regardless of who was the originator of the artificial word, the goal of creation was achieved. The word creation should be timeless. And meanwhile “documenta” has also become a quasi-synonym for “contemporary art” .

Wilhelm Lehmbruck's Kneeling Woman (1911). It stood at documenta 1 in the entrance area of ​​the Fridericianum. 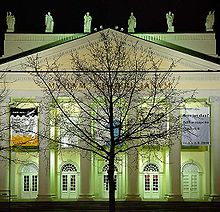 City deforestation by Joseph Beuys , oak in front of the Museum Fridericianum , documenta 7

The initiator of the first documenta was the Kassel art professor and designer Arnold Bode. On the occasion of the Federal Horticultural Show in 1955 , he managed to attract more than 130,000 visitors. The focus of this first exhibition was not so much on "contemporary art", that is, the art created after 1945, but rather Bode wanted to bring visitors closer to the work of those artists who were ostracized under the name " degenerate art " in Germany during the Nazi era . Therefore, abstract art , especially abstract painting from the 1920s and 1930s, was the focus of the first exhibition. In the following years, the focus shifted to contemporary art. Initially the show was limited to Europe, but soon it also included works by artists from America, Africa and Asia.

The documenta presents a cross-section of current art from the perspective of the respective curator , who is named artistic director in the context of the documenta . Her story is full of contradictions and ruptures, in which different artistic and curatorial attitudes, philosophies and theories are reflected as well as political and social trends. The number of visitors to documenta is steadily increasing. The documenta 14 counted over a million visitors at the two exhibition locations Kassel and Athens. The Venice Biennale is the only institution of comparable importance in the world .

The documenta uses different exhibition locations within the urban area of ​​Kassel. The Fridericianum has been a permanent location since 1955 . Since 1992, the DOCUMENTA IX, the newly built documenta hall has been added. In addition, other museums in Kassel will also become part of documenta for the duration of the exhibition, depending on the artistic director's ideas . In addition, there are buildings that are not normally used for exhibition purposes and therefore provide further insight beyond the aspect of the exhibited art, for example as technical or infrastructural systems.

In addition to the artistic works presented inside buildings, works in the open air are also an integral part of the documenta. The location of this exterior work is traditionally the Friedrichsplatz , in front of the Fridericianum, and the Karlsaue , an inner-city park. But other locations within the city have already been used.

Branch offices of dOCUMENTA (13) were in Kabul and Bamiyan in Afghanistan , Alexandria and Cairo in Egypt , and Banff in Canada .

The documenta 14 was held in Kassel (10 June to 17 September 2017) and on equal location Athens (8 April to 16 July 2017) instead. Works by the same artist could be seen at both locations, but different works. 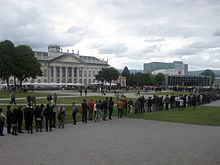 Visitors on the last weekend of dOCUMENTA (13)

A study carried out by the administrative economist Gerd-Michael Hellstern from the University of Kassel provides figures on the visitor structure based on surveys during Documenta11 (2002):

After that, only 7 percent of the visitors came directly from Kassel, while 27 percent came from abroad. 57 percent of those questioned belonged to the group of regular visitors. 61 percent of the people who visited the exhibition in 2002 wanted to come back in 2007. The event is dominated by younger people: 22.5 percent were between 30 and 39 years old, the second largest group were 20 to 29 year olds with 21.8 percent. A third of those surveyed were academics, but only 1.2 percent were skilled workers.

The world exhibition of contemporary art is organized by the documenta und Museum Fridericianum Veranstaltungs-GmbH , a non-profit company that is supported and financed by the city of Kassel and the state of Hesse as shareholders and is also financially supported by the Federal Cultural Foundation . The former managing director was Bernd Leifeld (since 1996), who retired at the end of June 2014. The supervisory board elected the managing publisher of Hatje Cantz Verlag , Annette Kulenkampff, as her successor. At the end of 2017, the Supervisory Board announced the departure of the managing director. The company had generated a deficit of 5.4 million euros for 2017 and was close to bankruptcy. At the beginning of 2018, the Kassel public prosecutor's office started investigations against four people responsible for embezzlement . At the beginning of August 2018, the public prosecutor announced the termination of the proceedings. A clarification on the whereabouts of the million is still open. Kulenkampff ended her position on June 1, 2018. Music manager Wolfgang Orthmayr was appointed as the successor to the management , followed by Sabine Schormann , who has previously worked in Hanover in the management of the VGH Foundation and as managing director of the Lower Saxony Sparkassen Foundation .

The respective Lord Mayor of Kassel, currently Christian Geselle , is the chairman of the supervisory board.

At the suggestion of Arnold Bode , the documenta archive was created in Kassel in 1961 . It houses the files of the respective documenta exhibitions, a special scientific library and a media collection.

→ Main article : List of the documenta works of art remaining in Kassel 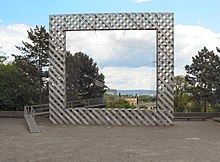 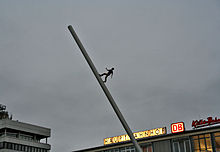 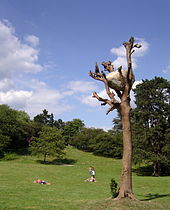 Sign of the comprehensive difficulty of the tasks for the future: "Idea di Pietra"
Giuseppe Penone 2010

Few of the exhibited works remained as purchases in Kassel museums for permanent “documentation” of current art. Some outdoor works can be found in the cityscape today, the most important of which is the 7000 Oaks project by Joseph Beuys with the provocative subtitle “City deforestation instead of city administration”. On the occasion of documenta 6 in 1977, the walk-in steel sculpture frame structure by the Austrian artist collective Haus-Rucker-Co was created . The world's first laser installation in public space, between Zwehrenturm , Hercules , Orangery and Karlsaue , was set up by the artist Horst H. Baumann . It was later reactivated as Laserscape Kassel and is still in operation today in a modified form. It is made of polyester and reminiscent of a folded paper boat dreamboat Aunt Olga of Anatol Herzfeld found a place on the premises of Heinrich Schütz School . Walter De Maria drilled the vertical kilometer of the earth on Friedrichsplatz and filled the hole with solid brass rods 5 cm in diameter, which, one kilometer into each other, were inserted into the earth permanently; From above you can only see a plate on Friedrichsplatz and in its center the round cross-section of the rod.

For documenta 7 , 1982, Claes Oldenburg anchored an oversized pickaxe on the banks of the Fulda. Jonathan Borofsky's Man walking to the sky (now called Himmelsstürmer ) installed for documenta 9 in 1992 is now on the forecourt of Kassel's main train station ( not the Kassel-Wilhelmshöhe ICE train station ). Part of Thomas Schütte's group of figures “Strangers”, which is installed on the balcony of the former Red Palace on Friedrichsplatz, also stayed in Kassel . The other part of these sculptures is on the roof of the music and congress hall in Lübeck .

The steel constructions ( pickaxe , frame construction and heaven stormers ) were manufactured in close consultation with the artists by the Kassel company “Stahlbau Lamparter”.

Contrary to popular belief , the staircase to nowhere built by landscape planner Gustav Lange in 1992 as part of a controversial redesign of the central Kassel Königsplatz was not an original documenta work. It was only classified as part of the documenta by the then director Jan Hoet at the insistence of the city and with financial assurances. The controversial work of art was demolished in 2000 in an illegal action initiated by Kassel's then mayor Georg Lewandowski .

Giuseppe Penone's Idea di Pietra (Views of a Stone) have been in the Karlsaue near the Orangery since 2010 .

Quite a few of these works of art initially met with skepticism or rejection in the Kassel population and had to be enforced against considerable resistance, such as the vertical kilometer of the earth or the 7000 oak trees, which are now highly regarded . City deforestation instead of Beuys city ​​administration . At the time of their installation between 1982 and 1987, the latter were a call against the critical and discussion-ripe impotence of the petrification of people and cities.

A work of art that is a bit out of the way is the artist necropolis , which is located on the Blue Lake in Habichtswald. It is a cemetery where artists can set up their specially designed tombstone while they are still alive. You can reach the necropolis on a half-hour walk through the forest.

The artwork "Alter Bahnhof Video Walk", created by Janet Cardiff and George Bures Miller and exhibited at the documenta (13) 2012 in the Kulturbahnhof, was purchased by the city and is still available for loan through the city museum. A small portable media player with a screen and headphones invites you to take a stroll through the old Kassel train station, where the history of Kassel mixes with artistic fiction.

For documenta 14, the artist Olu Oguibe created a monumental obelisk for the Königsplatz in Kassel with the inscription in four languages ​​"I was a stranger and you took me in". Oguibe was awarded the Arnold Bode Prize by the city of Kassel for the work of art, which remained on the central Kasseler Platz even after the art exhibition ended . After the purchase of the memorial failed due to controversies about the location of the obelisk, the city of Kassel removed the memorial from Königsplatz in an unannounced action on October 3, 2018 and stored it in a building yard. On October 11, 2018, the city of Kassel announced that the obelisk would be rebuilt on stairs street and should remain there permanently.

Artistic director of the documenta