General view of the orangery: on the left the marble bathroom, above the main portal the sun of the planetary hiking trail, on the right the kitchen pavilion

The orangery in Kassel was built below or around 400 m south of the former city ​​palace near the western Fuldaufer under Landgrave Karl between 1703 and 1711. Since then it has formed the northern beginning of the Karlsaue . 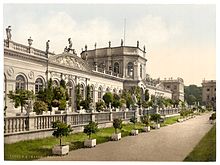 Orangery on a photochromic print around 1900

On the site of today's Orangery Palace and the Hessenkampfbahn in front of it , a walled palace garden was laid out by Wilhelm IV in 1568 , with a small pleasure palace at the south end. His successor Landgrave Moritz redesigned the garden at the beginning of the 17th century.

Today's baroque palace was built based on French models from around 1702; the architect is the landgrave's court architect Johann Konrad Giesler . The main building is 139.40 meters long and designed as a low structure with a higher, two-story middle section and two higher, three-story corner pavilions. The architecture of the building is continued in the axes of the baroque garden. The long galleries served as ballrooms and at the same time as a wintering house for the potted plants set up in the so-called orangery garden in summer. From this, the Kassel orangery culture, classified as important, developed. The corner pavilions were used by the landgrave family as a summer residence. The richly designed Apollo Hall was on the upper floor of the central building. It is significant that it could only be reached via the open roof - there were no stairs. The once open gate of the orangery underneath connected the so-called Voraue (today the Hessenkampfbahn) and the rest of the park. The main axis of the magnificent baroque park thus ran through the building.

Landgrave Karl planned to line the main building of the orangery with several pavilions that were a bit apart. During his lifetime, however, only the marble bath at the western end of the orangery was built (1722), a state chamber that, apart from the presentation of numerous marble sculptures by Pierre-Étienne Monnot, served no practical purpose and can be visited today as part of guided tours. It was not until 1765 that the symmetry of the complex was restored by Simon Louis du Ry with the construction of the kitchen pavilion, which faces the marble bathroom to the east .

After the occupation of Kurhessen by French troops, the orangery initially served as a hospital and warehouse. In 1808 the Westphalian King Jérôme Bonaparte convened the state estates here before the Fridericianum was converted into the “Palace of Estates”. In 1813 Kassel was liberated by the Russian army. The portal of the marble bath still bears the scars of the Russian shell fire.

From 1830 the interior was severely affected by unsuccessful repair work. Most of the stucco work and the interior decoration were lost. In 1872 the stucco work on the exterior was changed significantly. Among other things, the baroque medallions of Roman emperors were replaced by portraits of Hessian regents and the damaged statues were removed from the niches on the north side. The main part of the orangery and the forecourt, which was converted into the Hessenkampfbahn sports field in 1926, were often used as exhibition buildings or grounds for various types of industrial, commercial and specialist exhibitions.

The kitchen pavilion seen from the floodplain

During the Second World War , the orangery was badly damaged in a British air raid in October 1943. The ruins were then temporarily secured and in 1955 served in this form as an exhibition space for the second Federal Garden Show and the documenta . In the 1970s, its external appearance was restored, with the historical remains of the south side of the long wings being replaced by faulty replicas. The decorations on the front only correspond to the condition from 1872, the interior has been completely redesigned.

On the occasion of documenta 6 in 1977, the orangery became part of the Laserscape installation by Horst H. Baumann and Peter Hertha . The beam configurations take up the axial symmetries of the baroque complex of the orangery, Karlsaue and the city of Kassel as such and connect them on special days with nighttime illumination.

Today the orangery is the seat of the astronomical and physical cabinet with an integrated planetarium . This creates a reference to the scientific importance of astronomy in the time of Landgrave Moritz. At that time, the former defense tower in the city fortifications, the Zwehrenturm, housed the first facility for star gazing and the study of astronomical phenomena. The " Karlsaue Planetary Trail" has been affiliated with the museum since 1996 .

The administration of the museum landscape Hessen Kassel aims at the resumption of the orangery culture in Kassel. For this purpose, in the future citrus plants will again overwinter at least in parts of the orangery and the rooms will be used for events in summer. The spacious terrace separates the garden palace from the Karlswiese in front of it and is used in the kitchen pavilion area for catering, especially during the summer.

Castles and palaces in Kassel