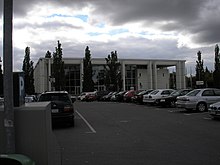 North side of the music and congress hall, 2005 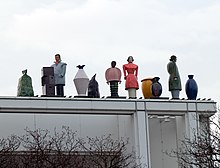 The Strangers by Thomas Schütte

The Lübeck Music and Congress Hall  - usually just called MuK in Lübeck - is located on the Wall Peninsula on the banks of the Trave opposite the Beckergrube and Mengstraße in Lübeck's old town . The MuK was designed by the architect Meinhard von Gerkan and opened on October 1, 1994. It combines the functions of an international congress hall, a philharmonic hall and a town hall.

Every year around 350 events, including around 150 concerts, shows, musicals, theater and comedy events, as well as around 100 congresses, seminars and conferences, are on the program of the music and congress hall. The highlights of the past few years included the congress of the German Society for Pneumology and Respiratory Medicine with over 2000 participants and the first SARS world congress. Outstanding recent concert events include the Rock Tower Festival and the appearance of the Berliner Philharmoniker under the direction of Sir Simon Rattle . In addition, rock / pop greats such as Herbert Grönemeyer , Beatsteaks , Kettcar (band) , Helge Schneider , Anastacia made guest appearances in the premises of the MuK.

The MuK is the main venue of the Schleswig-Holstein Music Festival , it is the home of the Philharmonic Orchestra of the Hanseatic City of Lübeck and a regular venue for the Elbphilharmonie Orchestra of the NDR.

In addition to modern architecture, the figure group The strangers by Thomas Schütte , standing on the roof of the hall, a striking feature of MuK. This former documenta exhibit was financed by the Possehl Foundation and is a symbol for all people fleeing war, persecution, torture, hunger and death who have to leave their living space and try a new, different life in a strange environment.

The design emerged from an architecture competition in the early 1990s. Until the MuK was completed, only smaller rooms such as the Colosseum , the Holstentorhalle or the Lübeck Theater were available for concerts in Lübeck .

In autumn 2015 the concert hall was closed due to the risk of collapse. The building has been refurbished since 2016 and the work should be completed in 2021. In 2018 all event rooms were put back into operation. Offices, rehearsal and conference rooms as well as artists' dressing rooms will be renovated by 2021. The costs are estimated at 21.5 million euros.

The shareholders of Lübecker Musik- und Kongresshallen GmbH are 90% of the Hanseatic City of Lübeck and 10% of the NDR. The managing director is Ilona Jarabek.

The MuK offers rooms for conferences and congresses for 50 to 2000 people. The concert hall seats up to 1900 people, the foyer has no seats for 3500 people.