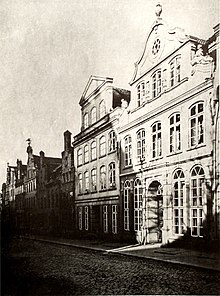 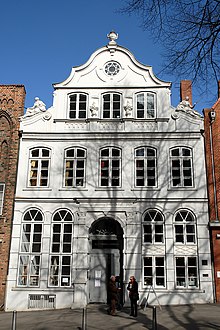 The Mengstraße is through the Buddenbrooks by Thomas Mann world's most famous street of the World Heritage of the Luebeck old town. It is the only street that housed the ancestors of two Nobel Prize winners: Thomas Mann's grandparents lived here and Willy Brandt's biological father , John Möller, a teacher.

The street begins at the geographical center of the old town island, the intersection with the Breite Straße and the Dr.-Julius-Leber-Straße leading to the east . Mengstrasse itself, as one of the historic rib streets of the Romanesque Lübeck town planning of the 12th century, is actually a pit . It leads from the Breite Straße down the Lübeck old town hill to the Trave and ends there at the harbor opposite the music and congress hall . In the lower area it is connected to the Beckergrube and Alfstraße via the smaller cross streets such as Blocksquerstraße .

Mengstrasse is first mentioned in 1259 as a volume rate . It belongs to the area of ​​the old Lübeck merchants' quarter between the port on the Trave and the Lübeck town hall on the market and the adjacent Marienkirche . This area was hardest hit by the air raid on Lübeck on March 29, 1942 , and as if by a miracle, at least in the lower area of ​​Mengstraße, a closed ensemble of old gabled houses on both sides of the street has been preserved. The Marienkirchhof development was removed in the 19th and 20th centuries towards Mengstraße, so that it appears as a free space to the left of Mengstraße behind the office building . The closed building line on the upper right Mengstrasse was badly affected by the war. The Buddenbrookhaus (No. 4) has only been preserved as a facade. Houses No. 6 and Wehde (No. 8 a – d) are still under monument protection in this area , the latter is the pastorate of the St. Mary's Church opposite. The facade of house no. 6 with the historically significant one -hip brick gable was moved here from Fischstrasse 19 after the Second World War.

Germany's oldest publishing house, Schmidt-Römhild, is located at the junction Schüsselbuden / Fünfhausen in a new Gothic-style post-war building . Opposite, on the corner of the Marienkirchhof, the foundation stones of the former Maria am Stegel chapel made of carved granite remind us that in the 1960s it was decided against its reconstruction and the demolition of the outer masonry.

The Schonenfahrer office building at Mengstraße 18, which is historically so important for Lübeck , was demolished in the 19th century after the transfer to the Reichspost.

The upper part of the lower Mengstrasse is characterized by the sober reconstruction substance of the 1950s after it was almost completely destroyed in the bombing raid in 1942 . No. 26 was once the seat of the first electricity company in Lübeck and the seat of the Stadtwerke until they moved to Moislinger Allee in 1932. Between 1864 and 1896, no. 28 housed the Lübeck district court until it moved to Große Burgstrasse . After that it served various administrative purposes. At house number 36, the remains of a renaissance portal were inserted into the reconstruction fabric.

In the lower part of the Trave, an outstanding ensemble of the otherwise more or less completely destroyed Kaufmannsviertel has been preserved. Listed the houses are 19-35, 41-45 and odd 38 -44, 48 and 50 ( Schabbelhaus ), 52-70 straight. The lower part of Mengstrasse does not belong to the World Heritage Site.

Lübeck's municipal cinema is located at Mengstrasse 35 . In house no. 62, a private residential building with a classical facade, which was inhabited in the 18th century by the Lübeck mayor Georg Blohm , a Lübeck woman set up the Lübeck baby hatch as a private initiative in 1997 . Up to 2007, nine newborns were placed there, which were later adopted.

Mengstrasse 70 houses Germany's oldest wine shop, the Carl Tesdorpf company founded in 1678 . The book printer Hans van Ghetelen is documented in 1480 with the acquisition of land in Mengstrasse.

The outstanding cultural and historical value of this part of Mengstraße becomes clear when you compare it with those of the other Rippenstraße between Mengstraße and Holstenstraße, in which only individual parts of the building that have been preserved are reminiscent of the earlier appearance, while otherwise the simply monotonous rebuilding substance predominates.