The river system of the Trave (schematic)

The Trave (lat. Travena ) is a 124 km long river in Schleswig-Holstein that flows into the Baltic Sea.

In the upper reaches, the Trave and the Schwentine formed the Limes saxoniae

Two of the terms used can each have different meanings. According to the hydrological name, the "Obertrave" is the upper course from the source to the confluence of the Elbe-Lübeck Canal. From the legal point of view of the town of Lübeck , “Obertrave” refers to the section from St.-Jürgen-Hafen of the Kanaltrave to the Holstenbrücke at the Holstentor. The "Untertrave" begins according to the traditional name at the Holsten Bridge, according to the city map on the Teerhofinsel and the signature of the Land Surveying Office as coastal waters on the Herreninsel.

For the waterway designations applies

The Trave originates in Gießelrade (Ostholstein district), north of the B 432 between Ahrensbök and Scharbeutz. In the center of the village there is the source pool, which is surrounded by a small area with benches. From there it flows in old melt water beds from the last Ice Age and first in a south-westerly direction through the Wardersee to Bad Segeberg and then further south to Bad Oldesloe . There it bends to the east, only to flow past Reinfeld to the south and then to Lübeck at Hamberge and Moisling .

From Bad Oldesloe to the confluence of the Elbe-Lübeck Canal, the Obere Trave was Reichswasserstraße from 1921, but returned to Prussia in 1941.

The salt reservoirs near Travehochwasser, October 2009 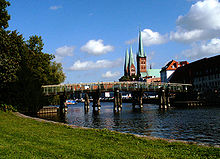 View from the Lübeck Malerwinkel on the Stadttrave (Stadtlübisch: Obertrave) on the old town with St. Petri and Marienkirche

The Elbe-Lübeck Canal joins the Lübeck village, now the Genin district, from the south , built on long stretches along the Stecknitz between 1895 and 1900. At the same time as the canal was built, the river was deepened and widened from the mouth of the canal to the edge of the old town to the Canal Trave . In Lübeck's old town, the course of the river was redesigned to meet the needs of shipping and medieval city defense, so that it forks into several bodies of water south of Lübeck Cathedral . First the city moat branches off to the west, then the canal trave to the east from the original Travelauf and leads in the former bed of the Wakenitz to the Klughafen on the northeast side of the old town. The Wakenitz , which originally bordered the old town to the east, is led at the Rehderbrücke (formerly: Krähenbrücke) by means of a culvert under the Canal Trave into the Krähenteich and from there flows through the Mühlenteich into the Stadttrave (Stadtlübisch: Obertrave). This is part of the original Travelauf on the western edge of the old town. The salt reservoirs stand on their left bank . North of the Holsten Gate , this travelauf becomes part of the Untertrave, but is still officially called Stadttrave until the confluence with the Canaltrave. On its right bank, the street An der Obertrave , is the music college . The Lübeck moat runs west of the former ramparts .

The seaports begin north of the Holsten Gate. At the northern end of the old town island at the castle gate , the city moat, city trave and canal trave come together again. Lübeck's trading ports are located between the Holsten Gate and the Teerhof Island , which was artificially created by a puncture in the 19th century . The Schwartau flows from the north where the piercing and the old fairway meet . The Slavic hill fort Liubice is located on the peninsula between this and the old Trave . It flows past the Schellbruch nature reserve and the fishing village of Gothmund to the Herreninsel , now a peninsula, north of which it is crossed by the Herrentunnel . From Travemünde, connecting line Norder-Südermole, it is regarded as inland water , a regular influx of water from the Lübeck Bay ensures a salt content between around 2 and 5 g / kg. Due to its formation during the Ice Age, the estuary between Herreninsel and the confluence with the Bay of Lübeck including the widening of the Pötenitzer Wiek and its Dassower See bay is also a fjord , the Traveförde.

To the east of the Herreninsel, on the right bank, lies the Schlutup district with the confluence of the Lübeck Landgraben . Opposite the Dummersdorfer Ufer begins with its Stülper Huk . The Trave then widens eastwards to the Pötenitzer Wiek, which has already been mentioned. The Stepenitz flows into the Dassower See . The stretch of the mouth of the Travemünde between the Pötenitzer Wiek and the open Lübeck Bay , bounded west by Travemünde and east by the Priwall , is actually an arm of the sea.

The deep cut of the Trave was created when glaciers carved out a channel in the last Ice Age (the Vistula Ice Age ) . The channel has been connected to the Baltic Sea since the end of the Ice Age and forms the Traveförde . This fjord also represents the lower course of the Trave. The water of the Trave has only flowed since about 12,000 BC. To the north in the Lübeck Bay of the Baltic Sea. Before that, the direction of flow through the glacial channels was to the south, as the route to the north was still blocked by the remains of the glacier.

The steady flow of water from the Trave keeps the outflow of the Trave ( förde ) to the Baltic Sea open - against the masses of sand removed from the Brodtener Ufer and shifted to the east by the current - and thus prevents separation from the Baltic Sea .

The Trave was called Dravus, Drave in the Germania magna in the first century .

In the upper reaches, the Trave and the Schwentine formed the Limes Saxoniae and the western border of Wagrien . In the area of ​​Lübeck's old town it was part of the system of medieval and modern Lübeck city fortifications . In the lower reaches it was and is the state border with Mecklenburg, until 1990 as the inner German border . The sovereign rights of the Trave and the Lübeck Bay were in dispute between Lübeck and Mecklenburg since the Barbarossa privilege (1188). The dispute over the banks of the Trave was decided by the Imperial Court on June 21, 1890 .

The trave crossing in the course of the federal highway 75 was replaced by the new Herrentunnel , which was opened on August 26th 2005 and is chargeable. The Herrenbrücke , a bascule bridge , was demolished by the end of 2006. Pedestrians as well as cyclists and moped drivers are transported free of charge through the Herrentunnel by a shuttle bus, every 15 minutes between 5 a.m. and 9 p.m. (summer schedule), during the night as required.

In the area of ​​Lübeck's old town, the new Eric Warburg Bridge was put into operation as a bascule bridge on March 10, 2008.

The Trave (Tr) is a federal waterway from the confluence of the Elbe-Lübeck Canal, 71 meters northeast of the axis of the Geniner road bridge (km 0.00) to its confluence with the Baltic Sea at Travemünde (km 26.94) , and up to the railway lift bridge in Lübeck (km 5.56) a class IV inland waterway on which the inland waterway regulations apply and from there on an inland waterway in class VIb, on which the sea waterway regulations apply with a pilotage requirement for seagoing vessels. The Lübeck Waterways and Shipping Office is responsible . Until 1934, the city of Lübeck was responsible for the Canal Trave, Stadttrave and Untertrave, from then on it was Reichswasserstraße and then Federal Waterway. In 2006 the city trave went back to the city of Lübeck.

Because of its importance, the course of the Untertrave has been corrected several times in the past.

original location of the Herrenfähre at the foot of the Fährberg

Shipping traffic is controlled by a traffic control center near the Travemünde lighthouse . The lighthouse is irrelevant for the approach to Travemünde, the beacon is now on the roof of the Maritim high-rise.

The Schleswig-Holstein state government, through Agriculture Minister Christian von Boetticher, has reported the entire travel up to the mouth, including the adjacent nature reserves, to the European Union as an FFH area as part of the Natura 2000 program .

Nature reserves on the lower Travelauf in the area of ​​the river mouth area ( estuary ) are the Schellbruch , the Dummersdorfer Ufer , the Dassower See and parts of the Priwall .

In terms of fishing law in the Lübeck area, the Trave is subject to the old fishing law of the Hanseatic City of Lübeck. Further information can be obtained from the Lübeck district association of sport fishermen. V. Due to its large catchment area and its diverse range of fish, the Trave is an interesting body of water for all sport and leisure anglers.

The Lübeck district association of sport fishermen e. V. issues fishing permits to all anglers. The condition for this is a valid annual fishing license or a vacation permit. Anglers who do not have their primary residence in Schleswig-Holstein must pay the SH fishing tax. The conditions for fishing in the area of ​​the Hanseatic City of Lübeck are not that easy, because the fishing law, which is over 800 years old, still applies here. The Trave is then divided into three different fishing districts.

River landscape of the year in Germany