The Bay of Lübeck is a bay in the Baltic Sea that belongs entirely to Germany . As part of the Mecklenburg Bay , it forms the "south-western corner" of the Baltic Sea. It is bounded to the northeast by a line from "Dahmeshöved" near Kellenhusen to "Großklützhöved" near Boltenhagen.

Joins at the southwestern tip of the Bay of Luebeck Travemuende the Travelodge . To the east the bay is bounded by the Klützer Winkel . The neighboring federal states are Schleswig-Holstein and Mecklenburg-Western Pomerania . In the bay, about before Grömitz, there is the Walkyriengrund shoal .

In the Bay of Lübeck, commercial shipping mainly uses the Lübeck-Gedser-Weg to the Kadetrinne in the direction of the eastern Baltic Sea. 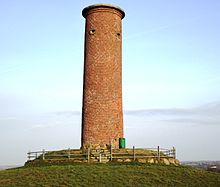 The sovereign rights to the Trave and the Lübeck Bay were in dispute between Lübeck and Mecklenburg-Schwerin (and Mecklenburg-Strelitz ) since the Barbarossa privilege (1188). The dispute over the banks of the Trave was decided by the Imperial Court on June 21, 1890 . The fishing limits and sovereign rights of Lübeck in the area of ​​the Travemünder roadstead remained in dispute between the two countries until the decision of the State Court for the German Reich of July 7, 1928 ( Lübeck Bay case ). In this decision, the Reichsgericht once again followed the Lübeck arguments, which were represented by the historian Fritz Rörig . The outer boundary of the roadstead then forms an imaginary line from the mouth of the Harkenbäk near Harkensee to the tower on the Gömnitzer Berg . The roadstead ends at Niendorfer Bucht at a line running at a right angle from this seaward border to an onshore border post on the Brodtener Ufer .

Port and seaside resorts on the Bay of Lübeck 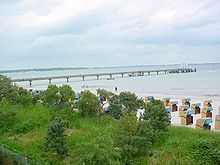 Sierksdorf Scharbeutz over the Bay of Neustadt seen

In the western part of the Lübeck Bay is the Neustädter Bay , which with the port city of Neustadt in Holstein and the seaside resorts of Kellenhusen , Grömitz , Pelzerhaken , Sierksdorf , Haffkrug , Scharbeutz , Timmendorfer Strand and Niendorf next to Lübeck-Travemünde with the Priwall peninsula is of great importance for the Owns tourism in Germany. Every year at the end of July, the second largest sailing event in the world takes place on the Bay of Lübeck with the sailing regattas of the Travemuende Week . Sports boat harbors are located in Travemünde, Niendorf, Neustadt and Grömitz.

The seaside resorts are well developed with bike paths, z. B. with the Baltic Sea Cycle Route , which leads around the Baltic Sea as a EuroVelo route.

Lighthouses on the Bay of Lübeck

Ship sinking in the Bay of Lübeck