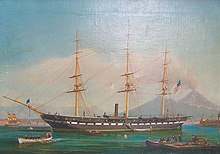 The American Alliance of 1875 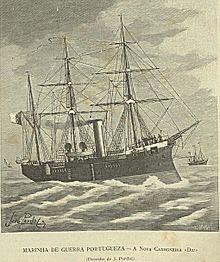 The Portuguese gunboat Diu from 1889

The German gunboat Panther from 1901

The Dutch gunboat Van Speijk from 1940

Gunboats are a class of smaller warships . They have been designed for use in coastal areas, on rivers and other inland waters and were used to support the land forces with artillery , for guard, escort and colonial service. The term gunboat policy comes from them.

The early gunboats from the 18th century were initially small warships armed with up to three light cannons or mortars that were propelled by muscle power and by sails. These boats were used by the navies exclusively for use on the coast and to protect estuaries. Napoleon had hundreds of gunboats built and equipped with howitzers for the planned invasion of England .

Rowed gunboats equipped with auxiliary sails were mainly represented in the fleets of the countries bordering the Baltic Sea . In the Prussian fleet from 1840 to 1848 these vehicles were called Kanonen dinghy and Kanonen sloop .

Until around 1850, such gunboats were used for sea landings and for the siege of coastal fortresses . With the introduction of steam engine propulsion on ships, machine-powered gunboats were also built from 1830. Initially, gunboats with wheel drive and later with screw drive were initially put into service with auxiliary sails. The first screw gun boat in Europe was the Von der Tann , which was commissioned for Schleswig-Holstein in 1850 .

During the Crimean War , gunboats were able to establish themselves as a separate class of warship. From around 1860 only steam-powered gunboats of the so-called I and II classes were built. The size of the vehicles increased from approx. 290 tons to up to 1200 tons, as did the caliber of the artillery from 8.8 cm to max. 15 cm. From 1900 the tasks of the gunboats in the German Imperial Navy were increasingly transferred to the faster and more heavily armed small cruisers . With the end of the First World War , no more gunboats were planned in the German Navy. However, during the Second World War the German Navy confiscated three multi-purpose boats of the Dutch Navy that were still under construction as well as an also unfinished fisheries protection ship of the Belgian Navy and put the former into service as K 1 to K 3 gunboats and the latter as K 4 gunboat . After the end of the Second World War, practically no gunboats were built anywhere in the world. However, they remained in the fleet lists for decades . Today, their tasks are performed by other classes of ship (e.g. patrol boats, artillery high-speed boats).

Since in the past gunboats were often sent off the coasts of foreign countries and territories by the sea powers to enforce their own interests (e.g. the German gunboat Panther off Morocco - the so-called Panthersprung and the German gunboat Iltis in China ), the term arose the gunboat policy . This term is still used today in the age of aircraft carriers and nuclear submarines .

In the second half of the 19th century, the subclass of armored gunboats was developed from the gunboat class. These heavily armored vehicles had a water displacement of over 1000 tons and were intended to defend estuaries from enemy invaders. They were armed with one or two cannons of 21 cm to 30.5 cm caliber (30.5 cm was the main caliber used on ships of the line at that time ). However, the armor and the weight of the artillery meant that armored gunboats were hardly seaworthy. They were therefore removed from the fleet lists relatively quickly. Their tasks were taken over by other types of ships (e.g. coastal armored ships ). Only a few countries pursued the idea of ​​the armored cannon boat, albeit with different tasks. The Thai navy had a total of four armored cannon boats built between 1925 and 1938. However, these ships were an armored variant of the "normal" gunboats.

Another class schwergepanzerter gunboats after the first of its kind monitor called and is a subclass of ironclads (Ironclads). 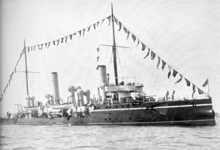 The British Jason of the Alarm- class

Another development were the torpedo cannon boats. In addition to the artillery , they led to torpedo armament . Even very small boats were also referred to as torpedo cruisers , such as the Russian Kasarski class developed at Schichau or the Swedish boats of the Örnen type .
The Chilean torpedo cannon boat Almirante Lynch , built in Great Britain, succeeded in sinking an enemy warship for the first time with a self-propelled torpedo. The advancement of the torpedo boat weapon led to the end of this subclass fairly quickly.

River gunboat Otter around 1909 during a test drive on the Weser. The boat still carries the national flag instead of the Reich war flag.

In addition to the seaworthy gunboats, special river gunboats were and are in use in numerous fleets. They are built exclusively for use on rivers and other inland waters and usually only have a shallow draft (less than 2 m). In addition to serving on European and American waters, river cannon boats were often used on rivers and lakes in the European colonies in Africa and Asia for guard, security and police tasks. River cannon boats were mostly unarmored and often armed with high-angle weapons (e.g. mortars, mortars , grenade launchers ). River cannon boats are still in use today (e.g. Brazil , Russia , Paraguay ), although today they are mostly referred to as river combat boats . In the British campaigns against the Mahdi uprising in Sudan , river gunboats played an essential role.

The class of heavily armored river gunboats is called the river monitor.