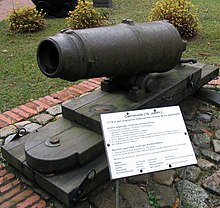 Representation of a carronade according to plans by Robert Melville - before the shot ...

The carronade (Engl. Carronade ) is a kind of light cannon short range since the end of the 18th century, first as auxiliary armament to battleships and frigates , and later as the main armament on sloops and corvettes were set up. The carronade was used relatively rarely in land armies. The first of these short-barreled weapons were invented by General Melville (1728-1809) in 1774 and cast at the Carron Iron Works in Falkirk , Scotland, hence the name Carronade .

The carronade had a very short barrel without a slide with a large caliber of lighter and therefore weaker construction, which is why it had to be loaded with less powder than heavier cannons of the same projectile weight. Because of the short barrel and the smaller amount of powder, the muzzle velocity and accuracy of the shot and thus the effective range of this weapon were smaller than that of other cannons. At a short distance, however, the effect on the enemy ship structure could be devastating due to the lower projectile velocity, because the carronade bullet did not pierce the side of the enemy ship, but rather smashed it and caused a rain of splinters to fall on the enemy.

The gun also differed from the cannon in that the barrel was positioned differently. The carronade was usually on a special pivotierten Gleitlafette stored and not the usual canons trunnion mounted, but with a centrally cast under the pipe loop, a bolt is inserted through the horizontal. The lower-lying storage allowed the required steeper shooting angles with the same height of the mount.

A major advantage of carronade was their lighter weight, which made it possible, large-caliber weapons on the bodies as Back and back deck set up where normal cannons would have been too heavy. In 1790, a 68-pound carronade weighed 1.78 tons, just as much as a 12-pound cannon on a normal carriage. In addition, because of its lightness, it could be served by small teams. This made the carronade very popular with merchant ships in order to be able to defend oneself effectively at short distances with lighter carronades with large projectile weights. The most common calibers were 68, 36, 24 and 18 pound bullet weights. Nelson's flagship HMS Victory carried two 68-pounders on the forecastle at the Battle of Trafalgar .

The navies of mainland Europe initially did not internalize the new principle of the carronade, the French, for example, used howitzer- like obusiers . The navies of the Baltic Sea developed a type of short-barreled weapon with a large caliber, which was set up almost like rotating guns . They looked like a cross between a howitzer and a rotating gun.

Although it initially spread as a new development, especially in the American and English Navy on smaller ships such as the sloops, it was clearly inferior to the cannon in range. The ships equipped with a main armament of carronades were therefore usually equipped with at least one pair of long hunting cannons to compensate for this disadvantage.

The carronade was used until around 1850. Over time, you learned that keeping your distance is a simple antidote. Most ships were also equipped with carronades, so that no one had an advantage in close combat. In the early 1840s, guns firing shells were introduced, making carronades obsolete.