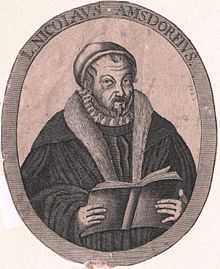 Nikolaus von Amsdorf, engraving by Kunike from the 19th century

Nikolaus von Amsdorf (born December 3, 1483 in Torgau , † May 14, 1565 in Eisenach ) was a German theologian and ecclesiastical reformer. As Bishop of Naumburg (1542–1546) he was the first Lutheran bishop in German-speaking countries.

Different spellings of names were not unusual in the late Middle Ages. B. entered himself as “Martin Luder de Mansfeld” when he started studying. Amsdorf has the following name variants: "Ambsdorf", "Amsdorff", "Amstorff", "Ambsdorff" and "Ampsdorff". He mostly wrote himself "Amsdorff".

Nikolaus was the son of the bailiff of Mühlberg Georg von Amsdorf and Katharina, born von Staupitz , the sister of Johann von Staupitz .

Amsdorf attended the Leipzig Thomas School in 1497 and moved to the Leipzig University there in the 1500s summer semester . After he had acquired the degree of a Baccalaureus on February 15, 1502 , he moved to the University of Wittenberg on October 18 of the same year . There he was licentiate in theology in 1511, after having held the Dean's Office of the Philosophical Faculty the previous year. He lectured in philosophy and theology, was canon at the Allerheiligenstift and was the rector's office in the summer semesters 1513 and 1522. Despite this strong commitment at the university, there was hardly any closer contact between him and Martin Luther until 1516 .

In 1516, Amsdorf's theses, which arose from Luther's reading of the Romans in 1515/16, became known. After an initial rejection, he increasingly agreed to these. Thereupon he joined the circle around Philipp Melanchthon , Wenzeslaus Linck and Karlstadt , who at that time pushed forward reform and reformation alongside Luther. Under the influence of Luther, the Scotist became a theologian of the Reformation. Although he did not suffer from Luther's trials, which hardly anyone in this group did, he nonetheless became one of the sharpest advocates of an unqualified doctrine of justification . In 1519 Amsdorf accompanied Luther to the Leipzig disputation . In the same year he tried to reform the university and to abolish the reliquary services .

The friendship between the Wittenberg reformers grew stronger at this time. So Luther dedicated his work To the Christian Aristocracy to him and Melanchthon his edition of the clouds of Aristophanes. In 1521 he again accompanied Luther on an important journey, to the Worms Reichstag , and was also a witness of the faked capture on the way back. In the following time, Amsdorf acted as a liaison between the Wittenbergers, the elector and Luther and, alongside Melanchthon, pushed the Reformation forward. I.a. he gave a lecture on the letter to the Hebrews based on Luther's submission. The leadership role in Luther's absence was clearly difficult for both of them, especially during the so-called Wittenberg Movement .

When the Zwickau prophets came to Wittenberg, Amsdorf, who was always ready for faster and more radical reforms than Luther, came under their influence. He advocated their abolition of the celebration of mass and the worship of images, or at least tolerated them with benevolence. Even if he had doubts because of the resulting riot and violence, it was only after his return on March 6, 1522 that Luther was able to convince of the necessity of breaking with them and thus also with Karlstadt. In the period that followed, Amsdorff worked on the translation of the Bible and urged the Reformation of the All Saints' Monastery, also refusing to become its dean.

Amsdorf came to Magdeburg on September 24, 1524 and became the first superintendent there . Ortisei was given to him as a parish . During this time he developed a lively publication activity and turned in pamphlets against the old doctrine loyal to the Pope, but also against burgeoning other currents. So represented z. B. the doctor Dr. Cyclop a Calvinist position on the Lord's Supper and views of the " enthusiasts ". The cathedral preachers stuck to the old doctrine of good works . From the point of view of those who adhered strictly to Luther, action had to be taken against all this. Amsdorf expressed himself in several writings against the Baptist Melchior Hofmann , especially because of his understanding of revelation . In addition to his service in Magdeburg, he was a. a. also called to Einbeck and Goslar to help the Reformation to break through there.

Although the cathedral chapter spoke out in favor of Julius von Pflug's successor after the death of Bishop Philipp von der Pfalz in 1541 , the Saxon Elector Johann Friedrich I prevailed in 1542 with his candidate Nikolaus, as counter-bishop , so to speak . To resolve the conflict, the cathedral dean Günther von Bünau was discussed as a possible alternative. This had the confidence of both the Elector and Julius von Pflug. The elector had also tried to persuade Georg von Anhalt to take over the office of bishop. Nikolaus Medler, who is active in Naumburg, was still in discussion .

Amsdorf was "ordained and consecrated" by Luther as Bishop of Naumburg . The majority of the people of the diocese had turned to the evangelical creed and the new faith found strong support in the citizenship of the cities. In opposition were parts of the cathedral chapter and aristocratic ministerials. This probably also contributed to the fact that Amsdorf chose a house in the middle of the city on the market near the Protestant councils as the new residence within Naumburg. Open opponents of the evangelical bishop under the monastery knighthood were Degenhard von Neuhingen on Pöschwitz , Valentin von Lichtenhain on Etzoldshain, Joachim von Etzdorff on Ostrau and Heinrich von Ende or Heinrich von Bünau on Droyßig .

As a bishop, Amsdorf, whose rule was based on the favor of the elector from the start, became heavily dependent on the electorate in secular matters. If the administration was entrusted to a monastery governor who acted in consultation with the electorate, the electoral authorities allowed themselves further interventions in the affairs of the monastery. B. Property deeds, which have always served to legitimize power, were brought to the Ernestine archive depot in Torgau and were not returned in full later. In 1546 the monastery regalia were confiscated. In family matters, Amsdorf stood up for the nephews, sons of his impoverished brother Barthels, and was not afraid to get them donations from monastery funds.

During the Schmalkaldic War , Julius von Pflug entered the city of Naumburg in 1546 under the protection of the troops of Moritz von Sachsen . Amsdorf was forced to flee.

Amsdorf was initially at Grimmenstein Castle , where a return to Naumburg still seemed possible. When the defeat became apparent in the course of the war, he went to his former place of work in Magdeburg.

He spent his last years in Eisenach, where his sister Sophie von Teutleben also lived. After his arrival in May 1552 he lived in the house of Justus Menius in the Oberen Predigergasse near the market square. The 69-year-old also spent 13 years in the city, his work consisted of the publication of Luther's writings, the ordination of young pastors and church visits. From there he doggedly fought all who, in his opinion, betrayed Luther's cause. For him, this included Justus Menius, Georg Major and even Melanchthon. With his demeanor, he increasingly isolated himself. The reformer died on May 14, 1565 at the age of 81 in Eisenach. He was buried in front of the altar in the Georgenkirche in Eisenach , his grave slab is now placed in the chancel. The family crest shows an ibex leaping to the right. Four contemporary portraits of him are known, which were then often reworked or given different captions. A portrait cast in ore around 1558 has not been preserved. A copper engraving from the 17th century was probably based on the representation on the grave slab.

May 14th in the evangelical name calendar .

The cities of Magdeburg ( "Amsdorfstraße" ), Eisenach, Goslar (Amsdorfgasse) and Naumburg have named a street after him.