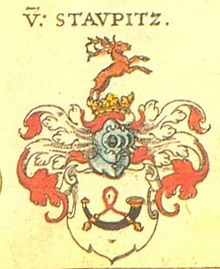 Coat of arms of the Staupitz family

Johann von Staupitz OESA / OSB (* around 1465 in Motterwitz ; † December 28, 1524 in Salzburg ) was a theologian who is best known as a patron and confessor of the young Martin Luther .

Staupitz came from a Saxon noble family . His sister Magdalena von Staupitz was, together with Katharina von Bora to the nine nuns who in 1523 during the Reformation from the monastery Nimbschen fled; she was born in Grimma on the Motterwitz manor. His brother was Günther von Staupitz. Johann von Staupitz, later vicar general of the Augustinian order, gave the Dabrun estate to his brother Günther as a fief. The mother of the two brothers moved to Dabrun with them. In 1483 he enrolled at the University of Cologne , where he acquired the degree of Baccalaureus in 1484 and moved to the University of Leipzig for a year . After receiving his master's degree in 1489 in Cologne, he returned to his homeland.

He entered the order of the Augustinian Hermits in Munich in 1490 and became prior in Tübingen in 1497 . There he enrolled on May 30, 1497 at the University of Tübingen , where he began reading as a baccalaureus biblicus in 1498 and is named as a colleague of the reform theologian Reinhard Gaisser , who made a name for himself in 1514 as the intellectual head of poor Konrad .

On July 7, 1500 he received his doctorate theologiae . 1502 appointed him Elector Friedrich III. to Wittenberg as a founding professor to build up the university that is emerging there . For this he recruited professors from Tübingen, such as Ambrosius Volland, who later became Chancellor of Württemberg . From 1502 to 1512 Staupitz was professor and first dean of the theological faculty at the new university in Wittenberg. 1503 Staupitz was elected prior of the Augustinian monastery in Munich and was on May 7, 1503 in Eschwege General of the German Observant - Congregation of the Augustinian Order , a post which he held until August 29, 1520th He took over this function from Andreas Proles, who died in the same year .

On April 3, 1506, Luther met Johann von Staupitz, vicar general of the Augustinian hermits, for the first time. On a visitation trip, Johann von Staupitz got to know Martin Luther in the Augustinian monastery in Erfurt and took care of his tormented young brother. After Luther's entry into the Augustinian order, it was mainly his confessor Johann von Staupitz who introduced him to late medieval mysticism and who had a decisive influence on his further development. In 1512 he made Martin Luther his successor in biblical studies at the University of Wittenberg. Staupitz was of great importance for his personal and theological development. He was Luther's confessor, recommended the young Luther to study theology and transferred him to Wittenberg, he always consoled his fellow brother, who was stern and fearful of salvation, to the grace of God and in 1518 released him from the duty of obedience to the Augustinian order. In 1518 Staupitz encouraged Luther when he was supposed to appear before Cardinal Cajetan at the Reichstag in Augsburg . Staupitz considered the divide between faiths to be bridged and remained a lifelong friend of Martin Luther, whom he asked on September 18, 1518 to "leave Wittenberg and come to him to live and die together". At the beginning of 1521 Staupitz refused a revocation of Luther's teaching, pointing out that this teaching did not come from him. In his letter of April 1, 1524, Staupitz reprimanded Luther for doing away with many Catholic exercises and rejecting vows, but states that he owed Luther a lot and that he wanted to be able to speak to Luther for at least another hour in order to to open up "the secrets of his heart" to him. His letters with Martin Luther, first kept in St. Peter's Abbey in Salzburg, were burned in the 17th century.

From 1503 to 1520 Staupitz was Vicar General of the German Observant Congregation of the Augustinian Order. His reform efforts met with resistance within the order and also on the part of the Pope, so that Staupitz turned to the practical tasks of his vicariate in 1512. He devoted himself to pastoral care in southern Germany (Munich, Nuremberg, Salzburg) and made visitation trips to Rome and the Netherlands in 1513 . Immediately after his election as vicar general, he campaigned for the establishment of the Augustinian hermit monastery in Sternberg in 1503 . After the bishop of Schwerin , Peter Wolkow, was banned from church in 1514 , he successfully campaigned for it to be repealed with papal support.

In 1520 he became cathedral preacher in Salzburg, but in 1521 he was removed from office because he did not meet expectations. With papal approval, he changed to the Benedictine order and was elected abbot of St. Peter in Salzburg on August 22, 1522 , where he died on December 28, 1524 in St. Peter's Abbey .